The execution of Joseph Reynolds: A chilling tale of the polite shy Irishman who killed a young girl in Leicester

The police custody shot of Joseph Reynolds from 1953. (Picture: Alamy)

ON NOVEMBER 17, 1953 Joseph Christopher Reynolds was hung in Leicester Prison for killing a young girl.

The soft spoken Irishman never denied his crime and told police he deserved to die for killing 12-year-old Janet Warner.

Author of Foul Deeds and Suspicious Deaths Around Leicester Kevin Turton told The Irish Post that it was a chance killing.

"He had created in his mind a plan to commit a murder and he didn't really care who it was, he wanted to carry out this plan," Mr Turton said. "It was pure chance."

But what lead to this shy loner to kill ma young girl? Here's what we know about Joseph Reynolds.

Joseph Christopher Reynolds was born in Dublin in 1922.

Educated by the Christian Brothers, he later joined the Irish Army in 1939.

After his discharge, he went on to join the RAF and came to England in 1943.

He was a labourer at the time of the killing. He was described as soft spoken, polite, shy, and a loner who rarely drank.

Reynolds said he had decided to kill someone just days prior to the murder on May 22.

In his statement to police, which was later read out in court he said, "for the past 10 days or so, I have had a feeling to kill somebody. I waited my chance along the canal at Aylestone.

"At first I was going to kill man who used to go past at a certain hour everyday but the day I killed Janet he did not come that way.

"I was just leaving when I saw the girl coming through the wood with a dog. I suggested that we go rabbiting."

Reynolds took Janet Warner into the woods, "caught hold" of her and attacked her.

"She began to scream so I beat her with my hands and feet," he told police. "I had a mixture of feelings. I could not stop.

"I saw the stocking with which I meant to strangle her lying on the ground. I picked it up and tied it round her neck to make sure she was dead."

"I hope when my time comes I will be half as brave." 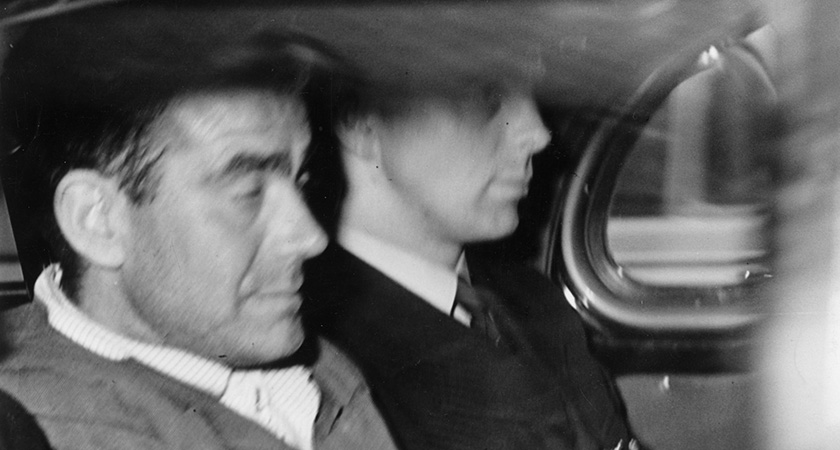 Joseph Reynolds in the back of a police car on the way to Leicester Magistrates in 1953. (Picture: Courtesy of the Leicester Mercury Archive)

Some local boys had heard a girl screaming that evening near the canal.

When they approached the area, they saw Reynolds running away and reported to police that they had seen a man with untidy dark hair, a broken nose and overalls to his chin.

Upon finding her body, police despatched hundreds of officers, special constables and tracker dogs in the area to find her killer.

Roads were closed within a 30-mile radius of the crime scene with road blocks in place and a light aircraft was despatched to search for lone figures crossing land on foot.

It was door-to-door enquiries the following day that lead to police to Reynolds' door.

'I deserved to die'

Reynolds made no attempt to hide himself or his crime, and admitted to police in his first interview that he killed Janet Warner.

He told police that he deserved to die for his crime and first appeared at Leicester Magistrates on June 22 1953.

He was ordered to appear in the Autumn, on October 26 1953, before Justice Pilcher.

Judge Pilcher tried to tell Reynolds to heed his defence team's advice and allow them to mount a case of insanity.

On that October day, Justice Pilcher had no choice but to hand down a death sentence to Reynolds, who stood in the court wearing a double breasted blue suit and an open collared white shirt.

As he bowed his head in silent prayer, he had the black cap placed over his face and was led from the courtroom.

On Tuesday, November 17 1953, Albert Pierrepoint executed him at Leicester prison, making him the only Irishman ever be hanged for a crime in Leicester.