A rescue boat coming back to the LÉ Niamh with women and children on board. (Picture: courtesy of the Irish Defence Forces)

"A FISHING trawler full of people went down in front of us. We had to pull the bodies out of the hold late into the night and line them up on the deck and get them into body bags."

In July 2015, the LÉ Niamh departed Cobh, Co. Cork for a three-month search and rescue mission in the Mediterranean sea, just miles from the factious Libyan coast.

Among them was LÉ Niamh's crewmen Lewis McCormack, who spoke to The Irish Post this week of the startling reality of life on the frontline.

It's a reality where elderly women and children share stories of working in camps for traffickers, trying to make up the fare for their passage to safety.

They are told vans will come to the beach but have mere minutes to jump on if they are to be brought to the boats.

"If they didn't make the vans, traffickers would open fire," Mr McCormack says, "and then the Libyan Army would finish what the traffickers didn't."

He recalls how one young man travelled to Libya, having been orphaned when his father died and his mother stepped on a landmine in Morocco.

"He wanted to come to Europe to work, and to have a family and a life," he says.

Prior to the arrival of the LÉ Niamh in the Mediterranean was the LÉ Eithne, which had been sending reports both of their rescues and the recovery of the dead.

"Nothing like this had ever happened before, this was the first time the Irish Navy was sent overseas on a mission," McCormack says.

"We were told we were going six weeks before. As the weeks went by, we got more updates and we started preparing the ship."

After six days at sea, the LÉ Niamh arrived to take up its patrol between Sicily and the Libyan coast.

"On the way over, we went through our Standard Operating Procedure, which is basically The Rulebook that says what to do in each situation," McCormack says.

"But when the first migrant boat came, we realised standard procedure wasn't going to work."

It was impossible, the Irishman adds, for senior naval officers to advise on procedure in such a great unknown.

"It was a case of we'll use our training, we'll build on it and if it doesn't work we'll go back to what we know," he says. "You prepare for every eventuality.

"We were preparing for someone to pull a gun and open fire on us, for people to jump into the water and swim at us, or for people to storm the boat."

The crew are trained to respond at a moment's notice.

Two rescue boats would be sent to meet each migrant vessel at a time; one staying on watch while the other boat brought people back to the ship, carrying eight to 10 at a time.

It was always women and children first.

"The Italian coastguard used helicopters to identify migrant vessels in the water," McCormack says. "We would then be deployed to that area to do a search and rescue."

"Rubber dinghies could hold about 150 people. Men would sit on the rim of the dinghy, while women would pile on each other's laps in the centre." 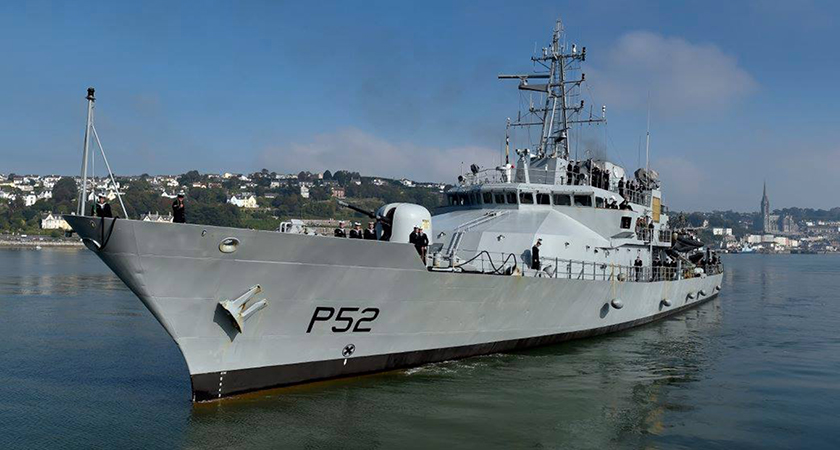 The LÉ Niamh, one of the large patrol vessels in the Irish Naval fleet. (Picture: Lewis McCormack)

The numbers on wooden fishing trawlers, however could go into the hundreds - though differentiating a genuine fishing trawler from a trawler of trafficked people often proved difficult.

The traffickers in the trawlers would spot the helicopter overhead and congregate with other trawlers in the area to offload migrants.

"The people are then told 'you're ok, you're safe, they're rescue helicopters' and then they'd go fishing. We can't rescue them, because we can't board a foreign trawler in their waters and accuse them of being traffickers," McCormack says.

"You could see it, you just couldn't prove it." 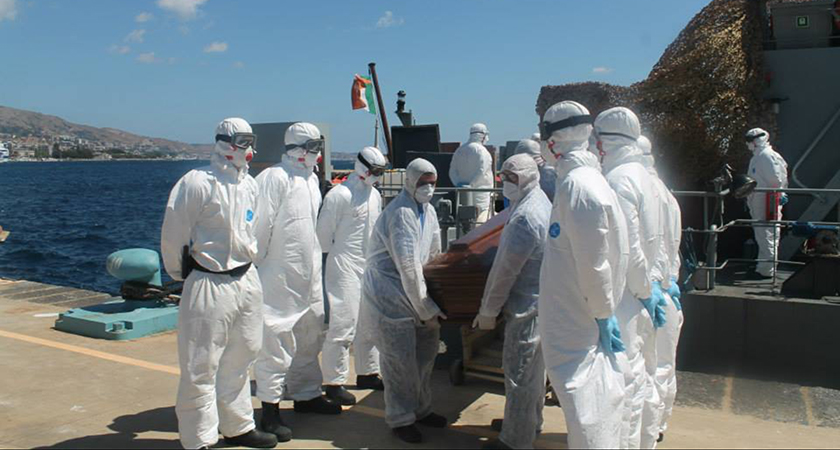 Some of the crew form a guard of honour as a coffin is offloaded from the LÉ Niamh.

Scroll down to see more pictures...

Once people had been retrieved from vessels, they were then taken back to the LÉ Niamh were they were fed, given water and medical attention.

Lewis McCormack says he will never forget the people they helped. 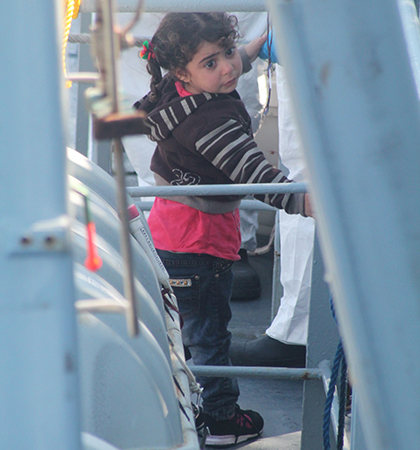 A young girl waits to board the LÉ Niamh. (Picture: Irish Defence Forces)

"Sometimes we'd have the craic with them, they'd teach us a little bit of Arabic and we'd teach them Irish," he says.

One five year old girl made a particular impression on the crew of the LÉ Niamh.

"She was the talk of the ship," McCormack recalls, "but I kept thinking does she not realise what's happened?

"She's been picked up in an overcrowded dinghy 20 miles off the coast of Libya in rough weather yet she's running around giving high fives to the crew and all smiles."

But among the darkness, death and despair, were much-welcomed moments of incredible joy.

Doctors Without Borders had offloaded 14 pregnant women onto the LÉ Niamh just as their ship has reached capacity.

One of the women went into labour four weeks early, giving birth to a baby girl called Destiny on July 21, 2015.

"The medics were shocked," Mr McCormack adds. "But her birth was a caffeine hit for the crew and we were buzzing off it for weeks." 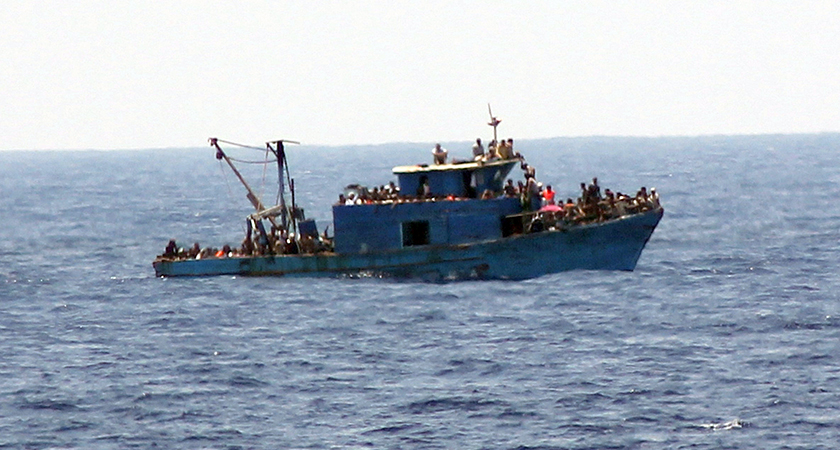 A fishing trawler with over 600 people on board, shortly before it capsized. The LÉ Niamh rescued 367 people and recovered 25 bodies. (Picture: Irish Defence Forces)

But for every moment of happiness, there are as many more that show the bleakness of the situation - such as the death of another baby on a trawler.

"She was a six month old baby, whether she got pushed under or trampled...she died," McCormack says.

But despite the huge emotional toll, a year on from the mission and the Irishman says he won't hesitate when asked to go back.

To date, the Irish Navy has saved almost 14,349 people in the Mediterranean and it's a growing number.

The LÉ Samuel Beckett is currently on patrol in the area and last Thursday alone rescued 122 people from a rubber vessel during a search and rescue operation conducted 37 miles northeast of Tripoli.

During Lewis McCormack's tour with the LÉ Niamh, the ship rescued the most amount of people in the Irish fleet - 4,127.

"We signed the dotted line when we joined the Defence Forces," he says. "We're soldiers, we just get on with it because it's our job."