HOLY WELLS have been centres of piety for centuries in Ireland. That is, until they paved paradise and put up a parking lot. But some of these wells are still in existence.

There are said to be around 3,000 holy wells in Ireland, including natural springs, elaborate stone monuments, sea caves and hidden sites in tunnels under some city and town streets. A holy well is a location where water issues from the earth and where the site is a focal point for supernatural divination.

Holy wells are also thought to have the power to cure illness through ritual. They also are associated with the cursing of third parties, and/or the veneration of early Christian saints, pagan deities, or elements of nature. Hydrolatry (water worship) and water cults have existed in Ireland for hundreds and likely thousands of years. Through references in ancient manuscripts and stories from Irish mythology, we know that not only did holy wells exist at that time, but they were, and continue to be, very important to the Irish.

Many holy wells are located in areas of natural beauty, often in groves of trees, in hollows in the landscape, at the edge of waysides, or at points where borders and boundaries run or meet. Others are located hidden in darkness in mysterious underground tunnels, chambers, or caves, and others again at the edge of the sea, where the salt water mixes with the fresh water twice each day.

The waters of holy wells are associated with the power of divination and attributed to the cure of specific or general disorders. It is believed that this power is strongest on the Pattern Day, usually a significant date on the Pagan and/or Christian calendar and different for each well. 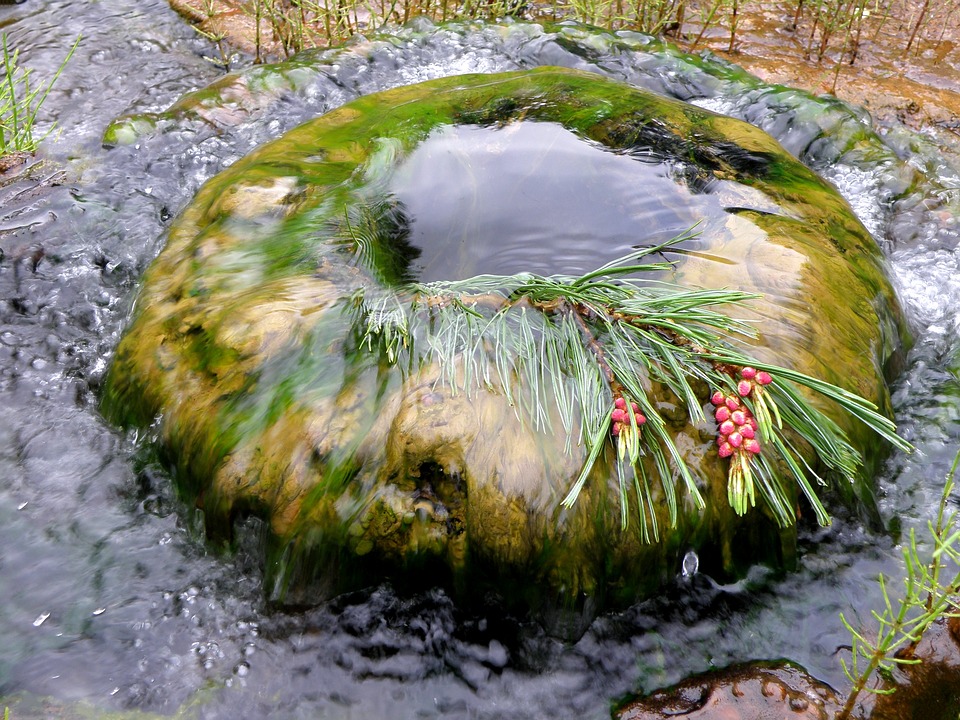 The use of water from a holy well for domestic purposes has traditionally been strictly forbidden.

A certain ritual, known as a ‘round’ or ‘station’ is performed in order to receive a requested favour or cure of a particular ailment. This involves particular prayers being said while walking around the well an odd number of times in the direction of the sun, and drinking or bathing in the waters at specific intervals. To complete the round, a rag, symbolising the ailment, is tied to the sacred ‘rag tree’ — usually an ash, hawthorn, holly, or oak. If the round is completed in reverse in the name of a third party, a curse is placed on that person, but worse consequences are reputed to befall the person who performs such an act if it is not deserved.

It is believed that a sacred or supernatural fish (usually a salmon, trout, or eel) resides in the well and is the guardian of that well. The sight of it either demonstrates the successful granting of a cure or request, or alternatively, the death of the person who sees it. It is generally reported that the water from a holy well cannot be brought to boil, and the wood from its sacred tree cannot be made to burn.

The use of water from a holy well for domestic purposes has traditionally been strictly forbidden. The consequences of using the water for domestic use include the drying up of the well, the well moving location, the disappearance of its sacred fish, the loss of power of the well, or the death or injury of the perpetrator of the water misuse. It is interesting to note that many of these practices, rituals, and associated legends have strong pre-Christian characteristics, not to mention the very preoccupation with water as a supernatural medium.

From at least the 5th Century onward, Christian missionaries began to visit Ireland from overseas to commence the process of converting the resident populace to the new faith. In an effort to appease local sensibilities and give credence to the new belief system, existing centres of pagan devotion, particularly holy wells, were re-named and altered to better conform with Christian beliefs. In addition, folklore and legends surrounding these sacred sites were amended to attribute the supernatural origin or powers thought to exist there to a local saint or holy person. Subsequent centuries also saw the building of stone religious houses close to these ancient sacred places, further enhancing the optics of compatibility of the new religion with the old.

The popularity of visiting Holy Wells remained constant over the centuries, but particularly during the reign of Henry VIII in the 16th century. Popularity was also high during the enforcement of the Penal Laws in the 18th Century. During these periods in particular, religious houses were closed and persecuted peoples were forced to visit alternative places of worship where fear of sectarian assault would not be a substantial concern. In the early 19th century, the successes of Catholic Emancipation saw greater religious freedoms for Catholics in Ireland. This resulted in attendances at many holy wells declining in favour of churches.

In addition, excesses had also crept in, and extreme drunkenness and violence became common sights at holy wells on Pattern Days. It was deemed such a concern that the matter was brought up at Parliament, and both the Catholic clergy and the civil authorities discouraged assemblies at these places. The result of this was yet a further decline in the popularity of wells as spiritual centres.

The accepted term for holy well in the Irish language is either Tobar Beannaithe, literally ‘holy well’, or Tobar Naofa, literally ‘saintly well’. The surviving names of many wells are a direct translation into English of the equivalent in the Irish language. However many names can also bear little resemblance to the original name for a number of reasons, the most common being the full or partial phonetic Anglicisation of the original, or other corruption due to misunderstanding. The names of many townlands, thoroughfares, houses, fields, and more recently, apartment complexes and housing estates have been attributed in varying forms with the names of wells that have been of some significance to the locality in the past. 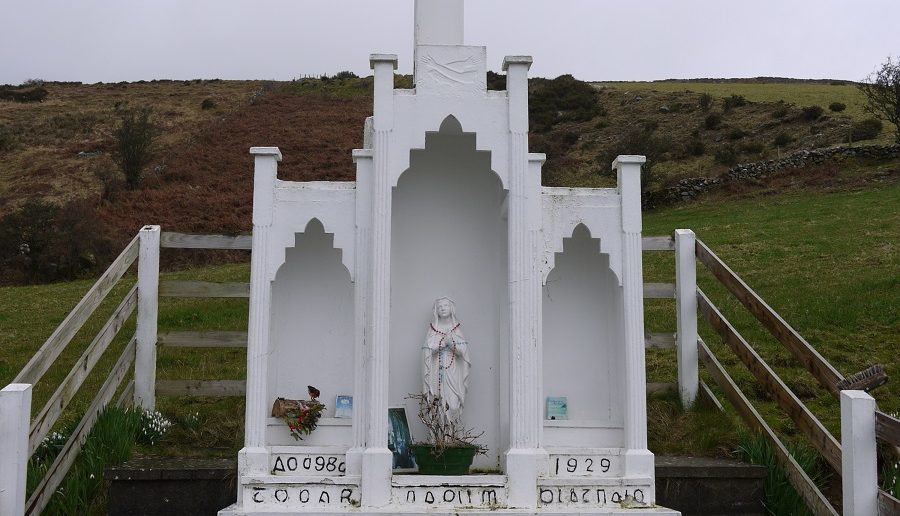 Saint Monnina is the patron saint of Upper and Lower Killeavy in South Armagh in the north of the country. She lived in the fifth century and was of royal blood, her father being the ruler of a kingdom which stretched from Louth to Armagh and her mother being the daughter of another King. She is said to be buried in the graveyard at Killeavy church and a large flag traditionally marks the spot.

A Pattern was celebrated in times past on 6th July and pilgrims would complete the rounds of her grave and then ascend Slieve Gullion to the holy well which bears her name. The mountain top well is in a very beautiful location overlooking the surrounding countryside.

The well has interestingly got three names, St Moninna’s Well, St Blinne’s Well, and Tobar Bláthnaid, all of which refer to the same saint.

St Werburgh’s Well is located within a copse of trees at the edge of a stream beside Lakeshore Drive in Airside Business Park, Swords, in County Dublin. The well was destroyed by persons unknown sometime after 2005, but it has since been restored and a group of local people are very committed to its care. 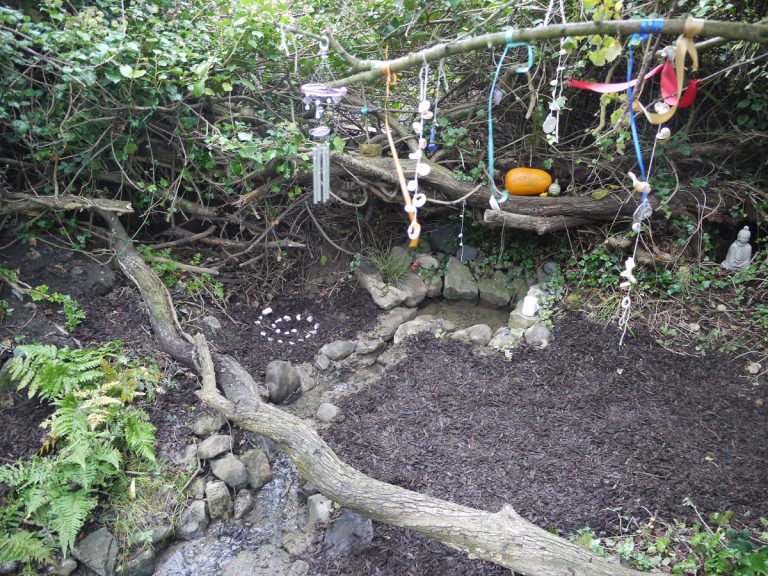 St Werburgh’s Church held lands in Swords in the 15th Century and it is believed that this is how a well in quite an isolated location became dedicated to an obscure female Saxon Saint. The site is now visited regularly by those practising many faiths, and this is evident in the number and variety of offerings left. It is resorted to for the cure of disorders of the eyes.

St Patrick’s Well is situated in the small hamlet of Carlanstown, not far from the town of Kells. It is an unusual domed structure, built in solid granite, and hidden away in the corner of a small field.

It is said to date back to the 5th century, when St Patrick stopped here on his way from Meath to Cavan. He is said to have cut and bled from his toe at the well, and a number of small reddish coloured stones scattered around the well basin are said to be stained as a result of this. Also present are thumb and toe impressions at the side of the entrance passage, which are also said to be courtesy of the saint. 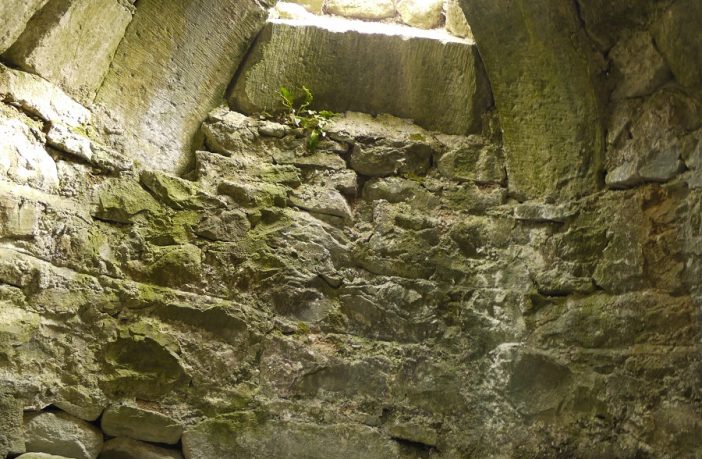 A Pattern was held here for many years, but, given the condition of the well, does not appear to feature on the parish calendar anymore.

It was common to visit the well to seek the cure of eye ailments. It was also common to cook the St Patrick’s Day dinner using water from the well, which is an unusual practice.

St Patrick’s Well from above ground.

Located close to the renowned Cliffs of Moher and in a sparsely populated area of outstanding natural beauty, St Brighid’s Well, or Dabhach Bhríde, as it is known locally, is an oasis of calm and peace, which is steeped in history and folklore. 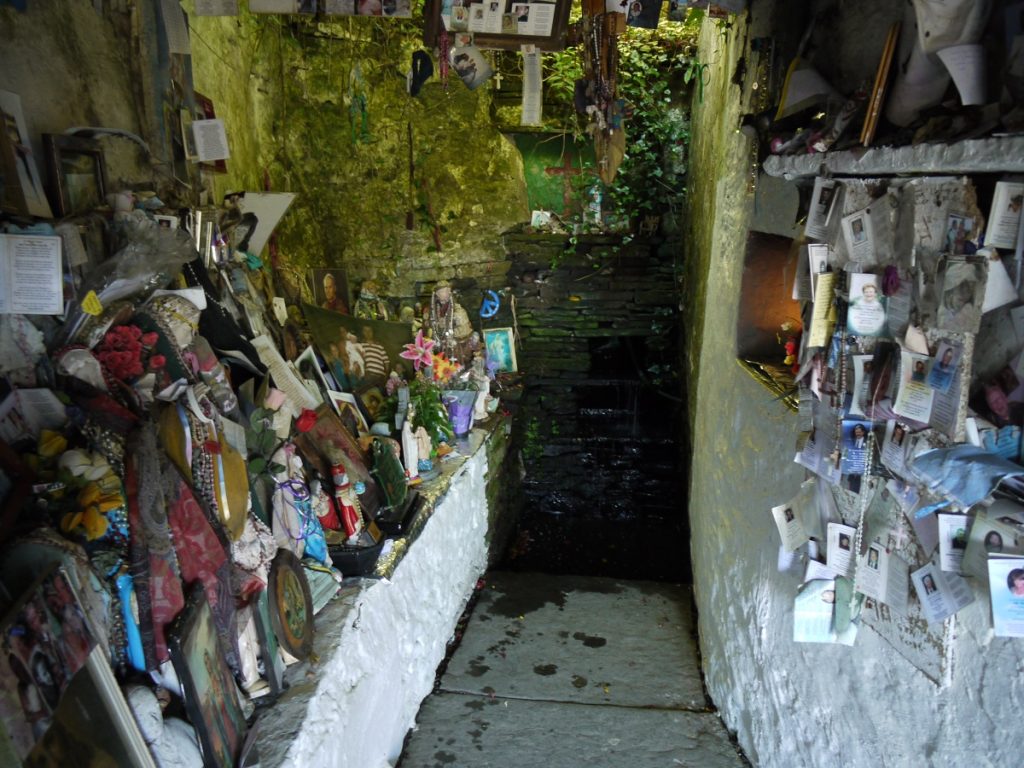 Thought to be originally dedicated to Crom Dubh, one of the principal deities of pagan Irish culture, and a celebrated Lúghnasadh festival site, it likely became dedicated to St Brighid in early Christian times; although an association with the goddess Brighid may have also always been present at the site.

The holy well is located at the rear of a small artificially-built tunnel, the walls of which are festooned in offerings left by the many pilgrims that visit around the clock from all parts of the world for their own personal dedications.

An ancient complex system exists during the pattern, which involves walking in bare feet and reciting the prayers in Irish. It takes in the entire well enclosure and neighbouring burial ground, in which are buried members of Uí Bhrian, the Kings of Dál gCais. 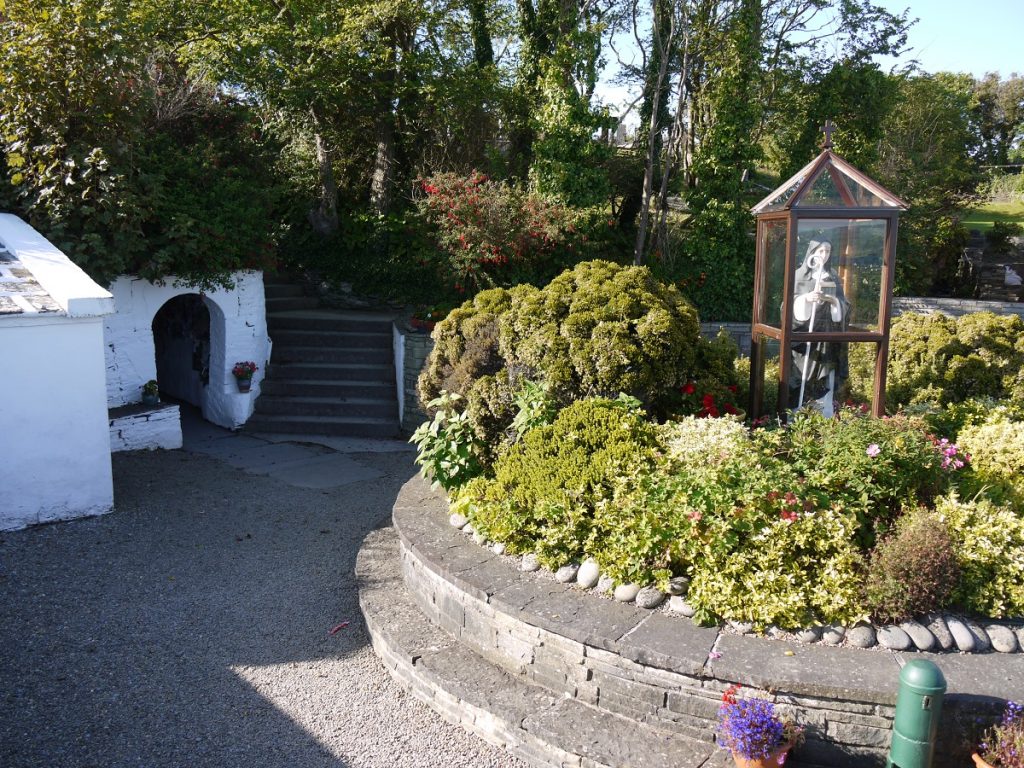 Maintained for centuries by the Augustinian monks, this tidal well lies on the banks of Lough Atalia in the city of Galway. It is one of a pair of holy wells that once graced this area and has become famous for the many cures it has passed onto pilgrims, particularly for ailments associated with the eyes and ears. This well is inundated by the tidal lough twice a day and totally submerged, except for the cross. A local swan can usually be seen resting at the well. 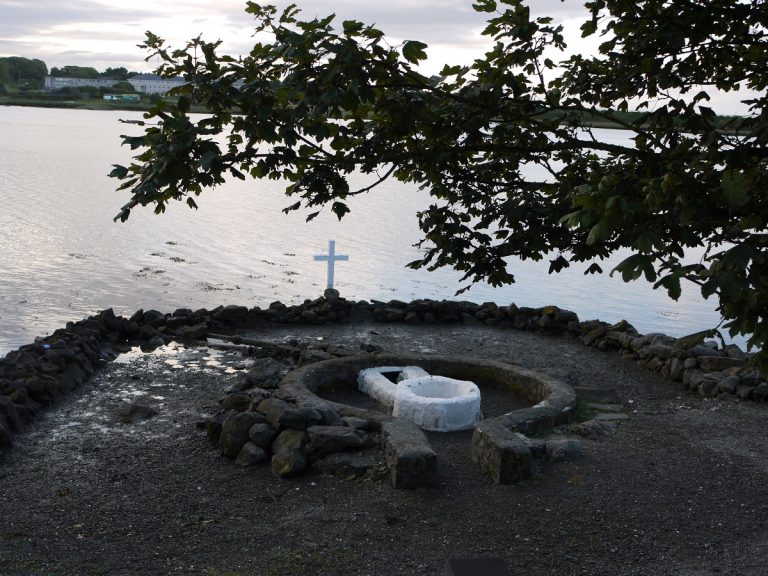 Carbury Hill in County Kildare in ancient times was the seat of Nechtain, a celebrated poet and King of Leinster. At the base of the hill in Nechtain’s garden lay a sacred spring, where, legend says, women were strictly forbidden from visiting it. Despite the rule, his wife, Boan, not only visited the well but gravely offended it by walking anti-clockwise around it three times. In retaliation at such an insult, the spring rose abruptly from the ground, swept Boan off her feet and carried her out to sea, where she was overcome and drowned. 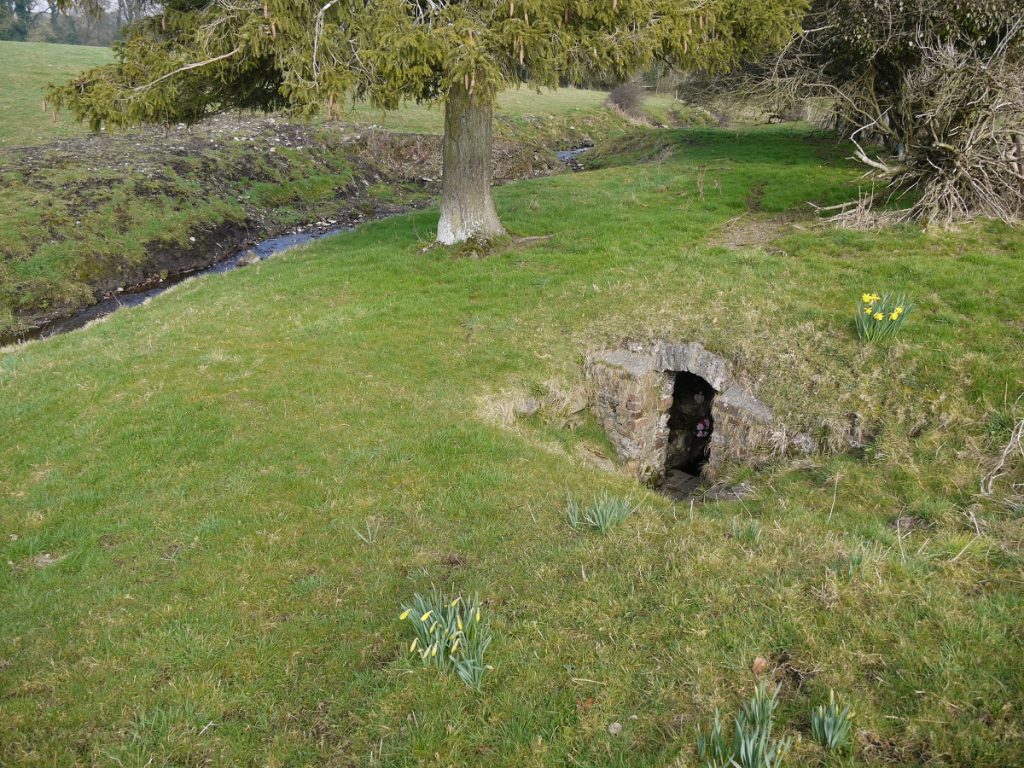 The watercourse left behind was dedicated to her, becoming the mighty River Boyne, which is, to this day, said to rise at Trinity Well. As was the case with the majority of holy wells, it was Christianised in the name of the Holy Trinity, and a pattern was held there annually on Trinity Sundays — the surrounding estate of Newbury Hall being given over to pilgrims and vendors for the occasion.

Gary Branigan has been a Local Historian for many years. A native of Dublin, he has a keen interest in the history and sociological past of the county he calls home, and is involved in the research and documentation of lost history and historical monuments. He specialises in the subject of holy wells and associated sites.