CONOR Gallagher, 51, is an artist from Sligo. He moved to London about a year ago to see how artists here were living and operating and has taken up residency at Wimbledon Art Studios, a hub for almost 200 other artists.

“The market in Ireland is still bad”, Gallagher told The Irish Post about his decision to leave home and head for England.

From this weekend until early January, Gallagher’s London work will go in display on the walls of the famous London Irish Centre in Camden.

“It’s a fantastic opportunity,” he says, but the Sligo man is still adjusting to the big city. “I wish people here would relax a bit more but you hop on the treadmill and go,” he says about London. 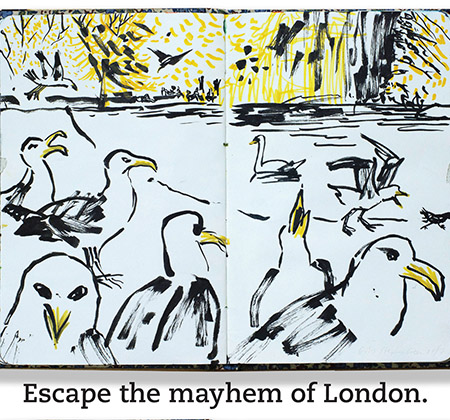 While oil (he hand makes his own oil paints with help from multi-talented Dervish musician and artist Brian McDonagh) is his preferred medium, Gallagher works with acrylics, graphite and natural materials to produce his weather-beaten and emotive landscapes.

The artist says the ‘wow’ piece from his recent open show at the studios in Wimbledon is Lough Gill Trees, but the simple black and white doodles from his sketch book pack plenty punch too.

The Dublin rooftops painting he describes as a break from his usual style and more of “an academic exercise” which started out as a drawing from the rooftop of the chocolate factory in Dublin.

Gallagher says those who came to see his work at an open show in Wimbledon recently remarked how beautiful Ireland looked in the paintings and how much it made them want to visit.

“It is a great cure for homesickness surrounding yourself with images of Ireland especially those you have created yourself”, Gallagher commented.