25th March 1965: A group of children and their dog playing on Cricklewood Broadway in London's Notting Hill. (Photo by Cleland Rimmer/Evening Standard/Getty Images)

THE Irish face of London has a new focus with huge swathes of arrivals choosing to live in Clapham and neighbouring postcodes over traditional centres like Cricklewood.

Irish people are leaving Ireland for Britain every week and many are choosing London and the south west postcodes around Clapham over the customary north.

The steady influx means the area has become the go-to place for many Irish 20 and 30-somethings, who are arriving ready for life in Britain - something that was not always the general  experience of previous waves of emigration.

The contrasts between the communities are acute on many levels and are symbolised in Clapham by a community that is buoyant, young and upwardly mobile compared with one that is growing increasingly isolated in the more traditional haunts.

The majority of the older community would have been supported professionally in the past by the construction industry in the past. Its Clapham equivalent is City-based, university educated and self-reliant.”

That self-reliance is backed by education administered by the internet, with new arrivals better informed and better connected thanks to social networking websites like Facebook and Skype.

Those factors allow this growing Irish community to retain contact with Ireland, which when added to low air fares, means life in places like Clapham can feel like an extension of home.

That extension is also seen in the city’s  GAA clubs and new soccer teams, where Irish accents accumulate by the week -  all in the name of opportunity as much as necessity.

It’s been done before, but not like this. Clapham is the new Cricklewood. 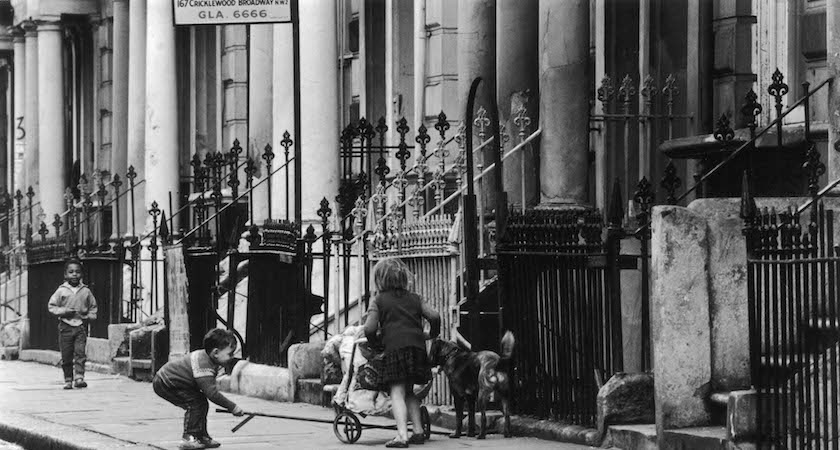 A group of children and their dog playing on Cricklewood Broadway in 1965. (Photo: Cleland Rimmer/Evening Standard/Getty Images)

It’s a Friday morning in Cricklewood and the bustle of the Broadway breaks when you take a left down Ashford Road.

The morning is cold and winter’s lingering chill is yet to lift on an area that once warmed a welcome for generations of Irish emigrants.

But things have been changing. The sweep of passing accents on the Broadway is more Eastern European than Irish now, and African migrants fill gaps left behind by a community that’s aging and leaving.

The pictures on the wall in the reception of Ashford Place (formerly Cricklewood Homeless Concern) quickly tell the story - images, which capture the old and the new, the outgoing and the incoming.

This used to be a big piece of Ireland in London’s northwest, home to the Galtymore dance hall, an offshore platform for big name Irish acts on a high street that once checked your step with conversation pit stops a dozen times a day.

The Broadway used to be littered with Irish retail workers, packed pubs and prickly banter. Today, it’s replaced in the main, by other ethnic stores and people targeting the needs of newer community groups.

In Ashford Place, the changing client base is pronounced. It’s lunchtime in a diverse dining room located in a bright basement.

Less than 20 years ago, 90 per cent of those eating would have held Irish passports, but now that figure is less than a third.

Danny Maher is the director of Ashford Place. He came to Cricklewood in 1995, when the Broadway was everything it was once billed to be, and more. Now that billing is fading.

“The Irish community here isn’t the same at all,” he says. “I first noticed it...going down to the post office and suddenly it dawned on me – all the foreign accents. It shook me really because it was lovely to go down the road and meet Irish people and to hear them chatting away as if they had nothing else to do.

“A surge of people went back for the Celtic Tiger and others moved out into the country. What’s left behind is the older generation, the people who didn’t move out and who didn’t go back home.”

Cricklewood was always represented by venues like the Crown and the Galtymore, the latter growing to symbolise the Irish community and sometimes, define it.

Up the road and around the corner, the old dance hall is just a building site now, a byword for nostalgia and happy memories. Time just caught up, and the ticking clock continues the change.

“You can’t discount history,” says Maher. “Places change and communities change. The Irish community is diluted. Today, you see some of the Irish pubs with information on posters written in Polish. If you go to Mass, you see an enormous change in the congregation, all kinds of races, black and Filipino, when before it would have been 80 per cent Irish.

“There is a well-connected community in Cricklewood, and plenty of first and second generation Irish people living locally so I think Cricklewood will live on as a location for Irish people but there are many who feel they are losing everything that was once theirs.

“In a way, there are two distinct Irish communities in London now, an aging one with health needs and a young one with social and economic needs.”

Friday night in Clapham; the streets are busy, trade is brisk and many of the clientele in the bars are Irish.

Up the road from the high street and across from the Common, The Alexandra Hotel, once run by the Mulpeter family from Kildare, remains a landmark Irish pub, busy tonight with the latest wave of emigration.

Clapham is the new Cricklewood…Kilburn, Camden, Harrow, Hammersmith; name-check whichever city settlement you like, this area of South London is fast becoming the default resting place for a new generation of emigrants; a generation that is both educated and informed and one that finds itself in the city as much by choice as by necessity.

For many new Irish arrivals, London is a place of opportunity and optimism. Its forms are both professional and social. Clapham along with its adjoining SW postcodes is fast becoming the entry point for many new beginnings and a place more are starting to call home.

The tentacles which stream out from the Junction are not just railway lines and they stretch from Tooting to Stockwell, to Wandsworth and Putney.

This is an area which spawned this year’s London senior football championship winning football team - Fulham Irish - and is sprouting soccer teams with names like Wandsworth Celtic.

If Cricklewood had the Galtymore, then Clapham’s Irish community are adopting Infernos and further down the road, the Swan. They may pale in comparison, but both are growing centres of Irish sociability.

Significantly though, Clapham fits professionally. It’s situated in a location that provides excellent access to the City; is a handy spin to Gatwick for the flight home; charges reasonable rent and its growing reputation among those who are moving there, is the fashionable side of trendy.

This area of South West is diverse however, like many traditional Irish areas in London always have been.

Notting Hill was once home to both the Irish and Afro-Caribbean communities and the Cricklewood of today is a mix of Irish, Eastern European and African peoples…however, the Irish in Clapham are increasing rather than decreasing in number.

This is an abridged version of an article first published in The Irish Post in 2012 - you can read the original here.

What's been your experience of moving to Britain? Share your story below or email [email protected]