History, heartache and the Kennedy curse - why the sister of Irish-American President JFK is buried in England

THE few days in June 1963 when the first Irish American President visited Ireland have gone down in history as a pivotal expression of Ireland’s place in the world.

John F Kennedy was the great-grandson of Irish immigrants, who went on to become the 35th President of the United States of America.

Following that infamous visit to Ireland, the President travelled to the Waddington RAF base in Lincolnshire and from there was taken by helicopter to the little village of Edensor, Chatsworth, in the beautiful Peak District of Derbyshire.

This was a well-kept secret (more easily done in the sixties), so why this detour on route to meeting Prime Minister Harold Macmillan?

Well, the President was in Derbyshire to visit the grave of his young sister, who had died at the tender age of 28.

Kathleen (born February 20, 1920), was known affectionally within the large Kennedy family as ‘Kick’.

She had first come to London in 1938, with her charismatic clan, as a vivacious teenager. 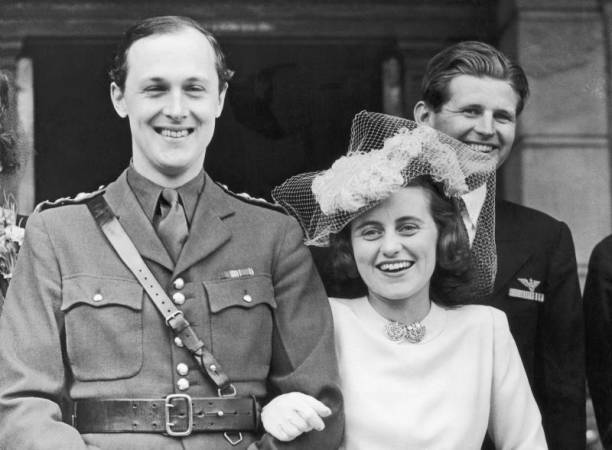 The wedding Of Kathleen Agnes Kennedy to William Cavendish, Marquess Of Hartington. May 6, 1944 (Photo by KeystoneFrance/Gamma-Keystone via Getty Images)

Her father Joseph had been appointed the US Ambassador to Britain, a role formally known as the UK Ambassador to the Court of St. James's.

She quickly wowed British society, becoming one of its top debutantes, and went back and forth to America during the World War II until she eventually settled in London.

On May 6, 1944 she married William Cavendish, the Marquess of Hartington. 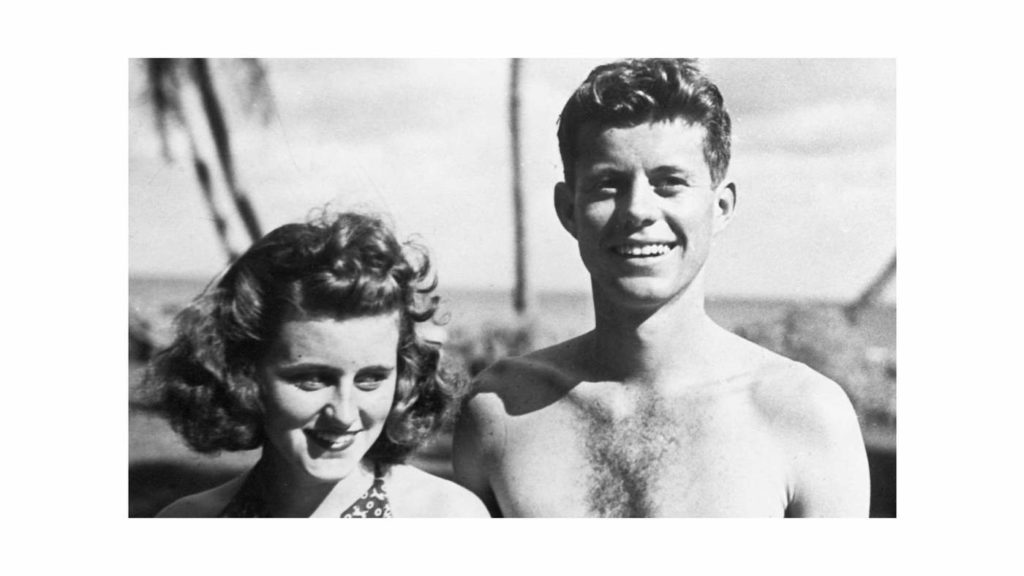 Kathleen pictured in happier times with her brother JFK

He was an Anglican and the eldest son and heir apparent of the 10th Duke of Devonshire.

Kathleen’s eldest brother, Joseph P. Kennedy Jr, was the only member of the Kennedy family to attend the ceremony.

"She was not beautiful, but her vitality and charm were such that she was the one who drew attention in a crowd," wrote the 11th Duchess of Devonshire, Billy's sister-in-law Deborah Cavendish, in her fascinating book, first published in 1980, titled Chatsworth: The House.

"Her high spirits, funny Irish American turn of phrase, so like her brother Jack's, and extreme good nature made her far more attractive than most pale English beauties."

“She was loved by everyone who knew her,” she wrote.

But tragedy, which is so closely associated with the Kennedy family, was soon to strike. 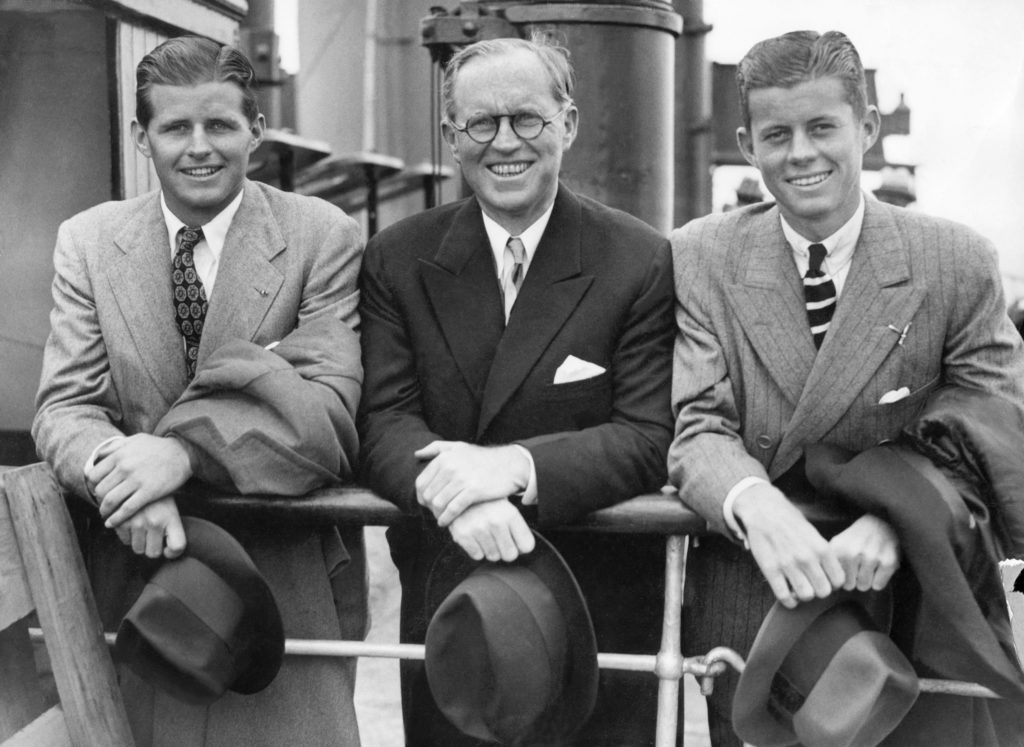 John Fitzgerald Kennedy (right) and his brother Joseph Patrick Kennedy Jr, flank their father Joseph on July 2, 1938 in Southampton on the deck of French "Normandy" cruiser liner after their arrival from the US. (PIC: Getty Images)

Quite unbelievably, within four months of her wedding Kathleen had to endure the shocking deaths of both her beloved brother Joseph and her husband.

After spending some time at Chatsworth House being consoled by her husband Billy's family, Kathleen decided to return to London, where she bought a townhouse.

Some years later she would find love again.

While volunteering at a Red Cross fundraising dance in June 1946, she met another wealthy British aristocrat named Peter Wentworth-Fitzwilliam.

He was the 8th Earl Fitzwilliam, whose family seat was Wentworth House, an amazing palace in South Yorkshire, with more than 300 rooms.

He was also Protestant and still married (although separated from his wife) with an 11-year-old daughter.

It was pretty much love at first sight for the couple, but theirs was not a happy ending, either.

On their way to a romantic getaway in the South of France in May 1948, before planning to meet her father Joseph Kennedy in Paris to discuss their desire to wed; their small, chartered plane crashed in stormy weather, instantly killing them both. 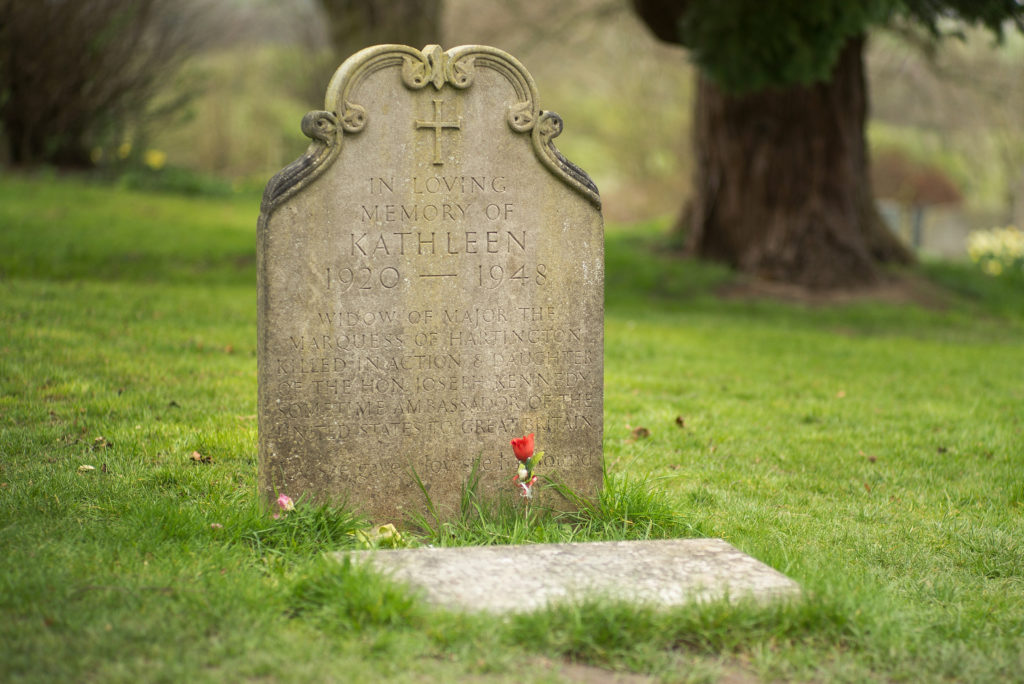 The grave of Kathleen Agnes Cavendish, (nee Kennedy) Marchioness of Hartington, sits in the churchyard of St Peter's Church, Edensor in Chatsworth, England

The Kennedy patriarch was the only family member to attend Lady Kathleen's funeral Mass in London and the burial which followed in Edensor.

But on that warm British summer day in June 1963, when the President went to visit his sister’s grave, he was joined by his sister-in-law, Princess Lee Radziwill, Kathleen’s sister Mrs Jean Smith (who later became Clinton’s Ambassador to Ireland) and the Duke and Duchess of Devonshire.

They bowed their heads as President Kennedy laid flowers on her grave.

Kathleen’s epitaph reads - 'Joy she gave, joy she has found’ - with the acknowledgement that she was ‘Widow of the Major Marquess Hartington killed in action and daughter of the Hon. Joseph Kennedy sometime Ambassador of the United States to Great Britain’.

A plaque added later to the site, stated ‘In memory of John F Kennedy, President of the United States of America, who visited this grave on 29th June 1963’.

After lunch at Chatsworth House that afternoon, President Kennedy left to continue his visit to London and his tragically short-lived life as a world statesman.

He died five months later, on November 22, 1963, assassinated as he rode in a motorcade through Dallas, Texas.

About a mile away from Edensor Church, is Chatsworth House, the gorgeous 297-room estate where, prior to her marriage, Kathleen had celebrated her 24th birthday.

Each year, some half a million people visit this stately home, which, for nearly five centuries, has been the Cavendish family home.

Currently, the 12th Duke and Duchess of Devonshire and their family reside there.

As well as the history it boasts, the house offers public access to its gardens, tea shop, farm shop and many walks.

It is well worth a visit.