NOT much is known about the life of Mike Malloy - but the attempts on his life, well that’s an entirely different story.

Known as “Iron Mike”, “Rasputin of the Bronx”, or simply “Mike the Durable”, stories of the Irishman’s ability to cheat death over and over again will live on in infamy.

He was a homeless man from Co. Donegal, living rough on the streets of New York City during the 1920s and 30s.

The former firefighter had fallen on hard times and grew quite fond of the bottle. He frequented local speakeasies and began to make a few friends.

Five crooks decided to take advantage of Malloy’s situation in 1933 - the last year of America’s prohibition law no less. They noticed how he would traverse the same bars every night, drink half his weight in booze and then pass out (he’s Irish what did you expect?).

The five men - Tony Marino, Joseph “Red” Murphy, Francis Pasqua, Hershey Green and Daniel Kriesberg plotted to take out three life insurance policies on Malloy and then get him to drink himself to death. 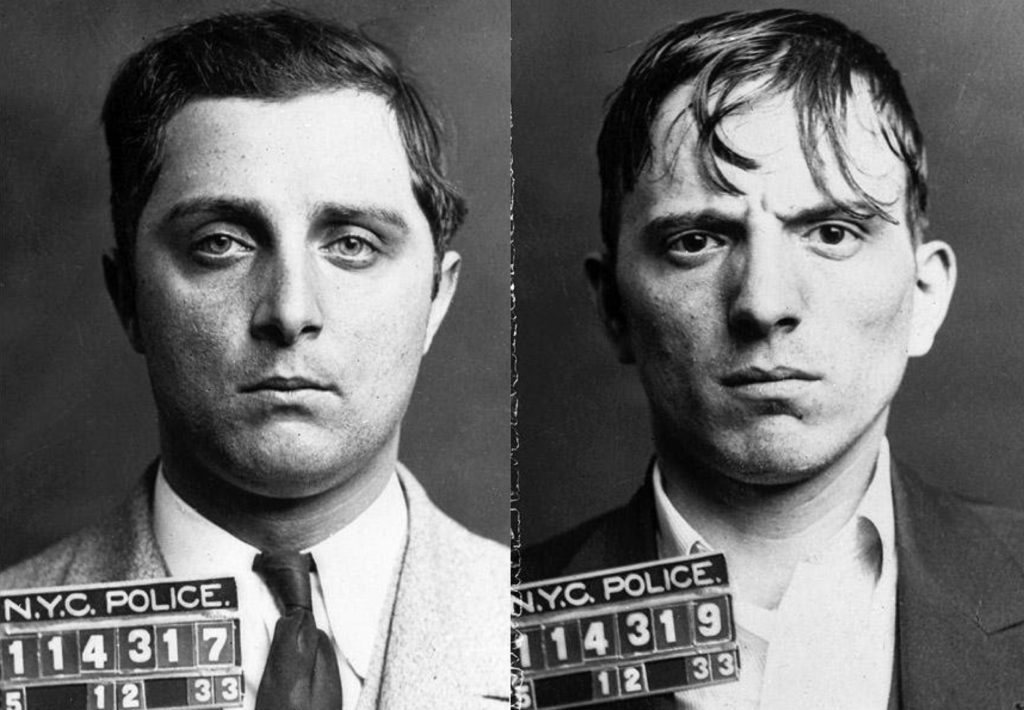 One of the crooks, Marino, had pulled off a similar scheme before. He had taken out a policy on a homeless woman - naming himself as the beneficiary. He force-fed her alcohol, then stripped her naked, before dousing her mattress in icy water and leaving it below an open window.

The next day she was dead and coroners declared bronchial pneumonia to be the cause. Marino picked up a cool $2,000 from the life insurance policy, without a fuss or a raised eyebrow

Why not try it again?

So they decided to befriend Malloy, cosying up to him at the bar and plying him with free drink. They stuck a petition, that looked to get Marino elected to local office, under his nose, which Malloy gleefully signed. What he didn’t realise was that he’d unknowingly signed off on three life insurance policies taken out on himself - which saw the crooks stand to gain $3,500 (around $60,000 in today’s money).

Marino, who owned one of the speakeasies, told him he could drink all he liked without charge. Malloy looked like he was in his 60s (he was in fact a decade younger), was in awful shape and always looked worse for wear, surely it wouldn’t take long for him to kick the bucket? - they thought.

Malloy would drink pretty much all day, every day, but without fail, he’d be at the front door the next morning, cheerful as ever, after another fix.

The gang decided to replace his alcohol with antifreeze, to speed up the process, but it made no difference. He’d be back the next day with a smile on his face.

Antifreeze was then replaced by turpentine and then rat poison. But nothing changed. He would pass out and be thrown onto the street, but every morning, there was Malloy, looking for another drink.

The group then got a little more creative. They soaked raw oysters in wood alcohol (methanol) and fed it to him - an idea that Pasqua came up with after seeing a man die after eating oysters soaked in whiskey. When that failed to topple Malloy, they gave him a sandwich made of spoiled sardines and carpet tacks. Not only did that fail, but the Donegal man even asked them to make him another!

After this, they realised that Malloy must have a stomach made of steel, and nothing they could feed him was likely to kill him, so they upped their game again.

One freezing winter night, when the temperature dropped to -26C, they waited for him to pass out, stripped him naked and dumped him in the snow. Then, they poured five gallons of water on his chest and face, and headed home.

Convinced that no one could survive such punishment, the group were gobsmacked to see Malloy, once again, turning up the next day, looking for a drink.

The crooks grew more desperate. They propped him up after another heavy night and staggered him into the street where a taxi driver they’d paid off ran him down at 72kmh (45mph), and then backed over him for good measure.

The next day, Malloy didn’t show. But before they could celebrate, the gang called round all the local mortuaries to confirm his death. But there was no record of him anywhere. Until there was, they couldn’t collect their money, of course.

Three weeks later, true to form, there was Malloy, at the front door of the speakeasy, looking for a drink. He’d suffered broken bones and had no memory of the night in question, all he knew was that he was thirsty.

The gang were at wit’s end. They decided on one last approach. But this time, there was barely any subtlety to it.

They waited for him to pass out once more, carried him up to Marino’s bedroom above the bar, and stuck an open gas pipe down his throat. Within an hour, Malloy stopped breathing and he was finally dead.

His death was attributed to a case of pneumonia - likely by a bribed doctor - and he was swifty buried, while the crew collected their ill-gotten money. 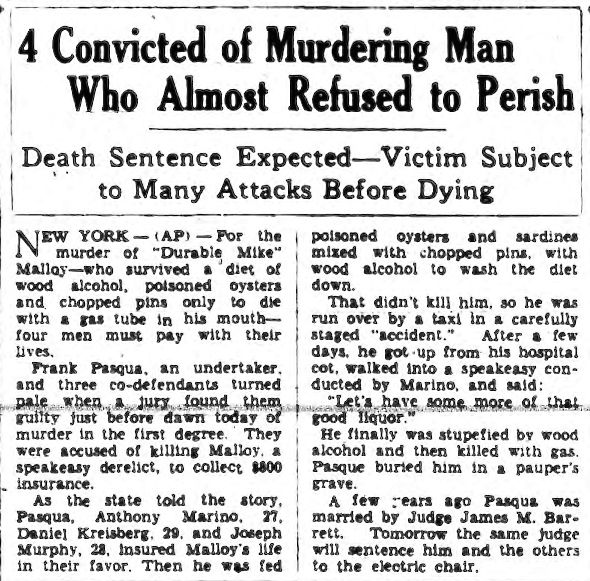 A newspaper cutting of the trial which saw four of the five men executed in the electric, while the fifth was jailed for life.

But word had spread of ‘Mike the Durable’. Policemen who visited the local speakeasies heard stories about the man who continually cheated death. And when they learned that a man by the name of Mike Malloy had died under curious circumstances, they launched an investigation. His body was dug up and forensically examined and the true cause of his death was revealed. He’d been murdered.

The five gang members meanwhile had been squabbling among themselves because they couldn’t split the money fairly, and soon caught the attention of local authorities. Their crimes were no longer in the shadows.

They were put on trial and convicted of murder. Green went to prison for life, while the other four were sentenced to death and executed in the electric chair at Sing Sing Prison in New York. Their ability to cheat death obviously didn’t match up to that of ‘Iron Mike’.

Mike Malloy eventually met a cruel and horrific death, but his unfathomable durability and sheer will to keep on living - as well as his sheer Irish will to keep on drinking - caused his killers to stray from their plan and expose themselves.

Over 80 years have passed since his death, but Malloy’s legacy survives, just as he continued to do. His story was featured in a 2015 documentary called ‘Name Your Poison’.

So the next time you wake up half-naked in a hedge after a heavy night with no idea how you got there, do us a favour and think of Mike.