The Irish Gin & Tonic Fest is an all-Irish summertime celebration of the best gins produced in Ireland.

Hundreds of bars and restaurants from across Ireland celebrate the best that Ireland has to offer the G&T between June 25 and July 1.

The organisers, Great Irish Beverages, decided that this year they'd bring some of their good cheer and spirits to London and close the festival in style.

Great Irish Beverages and A Drop Of Irish hosted the closing party at The Bootyard, in Dalston, East London on July 1.

Gins representing every province in Ireland were in attendance, and guests had the chance to meet the people behind the brands to find more about their story and how they're made.

Wild bog myrtle from the family farm in Fermanagh helps to characterise Boatyard Distillery's gorgeous organic grain gin. It has been nicknamed a "double gin" for the two distillations they implement for each bottling.

The initial inspiration for this Wicklow gin actually came from time spent working in the Hamptons in NY, also known to the locals there as Bonac. Apparently, it took the Clifford family 24 times to get their gin formula right, hence the name Bonac 24.

Straight outta county Kerry, with a rich spirit that is beautifully infused with eastern European spices and local flowers. Brought to you by the same folk as The Porterhouse Brewery.

Made in the only distillery in Leitrim, it is named after the famous Chinese green tea, it also features Irish ingredients such as dried meadowsweet which makes it a rather global spirit. 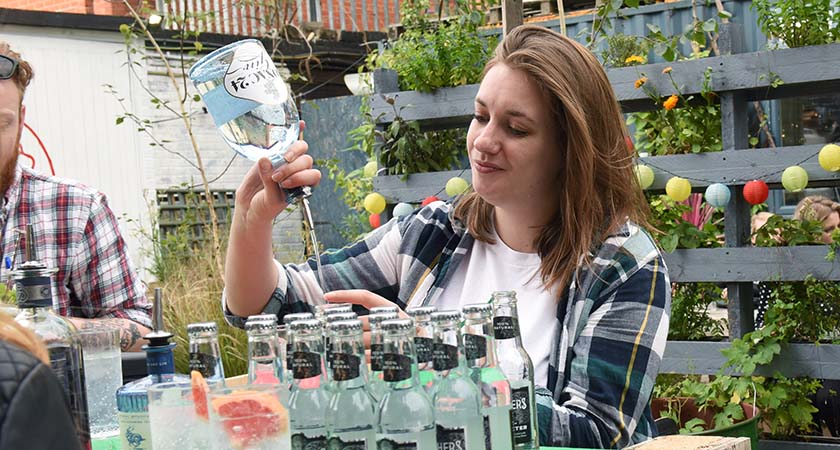 A dedicated G&T bar served up Gin & Tonics throughout the day, pairing the Irish gins on show with Poacher’s Tonic, a craft Irish brand currently making waves in the tonic market.

Irish chef Simon Lamont was on hand to cook up some of the finest BBQ.

Host of TV show The Lazy Chef, which saw him take to the road to highlight some of Ireland’s best kept culinary secrets, Lamont now splits his time between Ireland and London, cheffing and running pop-ups.

See our gallery below for more from the Irish Gin & Tonic Festival...