WE'VE all heard of Deirdre and the Children of Lir, but the myths and legends of Ireland carry an abundance of memorable characters and meaningful fables.

Ireland is an island of stories, some of which stretch back over many centuries and have their roots in a tradition that goes back even further.

Here are seven Irish fairy tales which deserve to be better known... 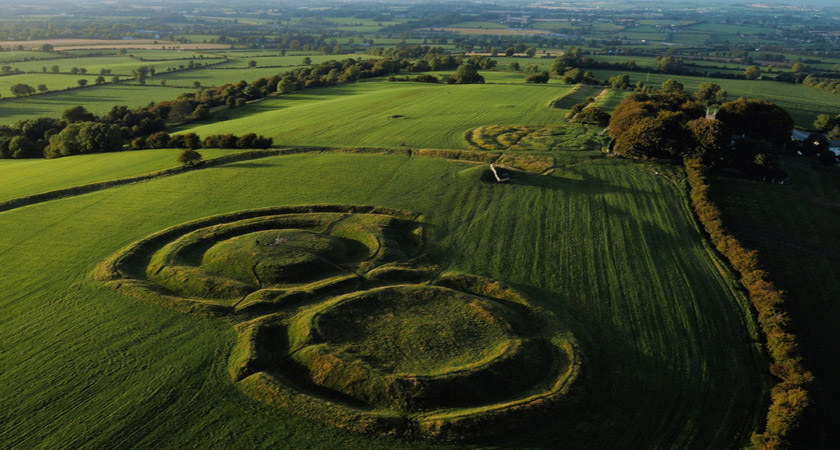 The tale takes place at the mythical Hill of Tara. Picture: Getty Images

Cormac mac Airt, the High King of Ireland, stands atop the Hill of Tara proudly looking over his kingdom. But despite having a strong son, a beautiful daughter and a loyal wife, there are no more battles to fight and he feels empty.

Suddenly a young boy appears with a branch which emanates beautiful music. "When you shake it", says the boy, "everyone who hears it forgets the sorrow of the world." Cormac agrees to give the boy three wishes as long as he can take the branch.

But to Cormac’s dismay, the boy’s three wishes are his son, his daughter and his wife. When the boy takes his wife, a distraught Cormac follows them through the forest to a silver wonderland known as the Isle of Apples.

There, the boy reveals himself to be Manannan – the great Irish god. Manannan agrees to give Cormac’s family back should he learn to value what he has. Agreeing, Cormac learns his lesson and becomes the greatest High King Ireland ever had.

Fintan married the granddaughter of Noah – the man behind the Ark. Picture: Wikipedia Commons

Fintan mac Bóchra, known as ‘the Wise’, was a seer who accompanied Noah’s granddaughter Cessair to Ireland before the Great Flood described in the Old Testament.

He was one of only three men in the expedition, along with 50 women, so he, his father-in-law and the pilot had 16 wives each.

Sadly for Fintan, his wives and children were drowned when the flood arrived but he survived in the form of a salmon, remaining a year under the waters in a cave called Fintan’s Grave.

He then turned into an eagle and then a hawk then back to human form.

He lived for 5,500 years after the Great Flood, becoming an advisor to the High Kings of Ireland. 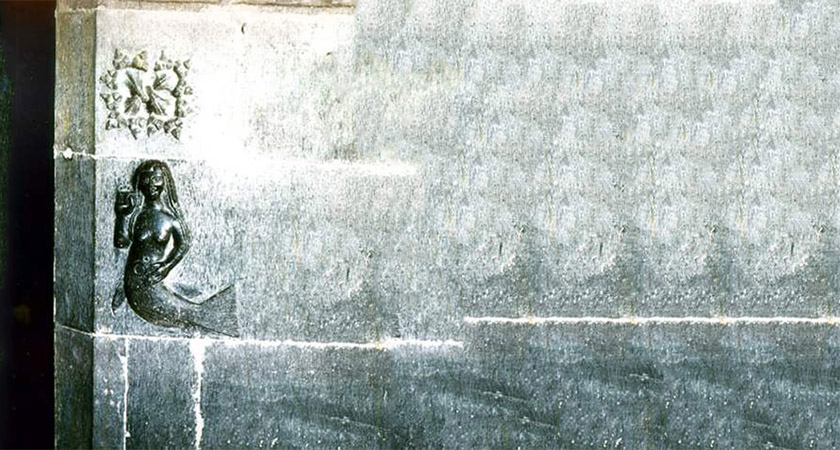 An image of a mermaid in Clonfert Cathedral, Galway is believed to depict Li Ban. Picture: Wikipedia Commons

Lí Ban was born to her father Eochaid mac Mairidh, from which the name of Lough Neagh came. When Lí Ban was young, Eochaid was drowned when a spring burst under the family home.

But Lí Ban survived in an underwater chamber in the lake for one year, which transformed her into mermaid form – half human, half salmon.

Together with her dog, which transformed into an otter, Lí Ban was free to roam the lake for 300 years.

But one day a passing boat noticed her angelic singing and she was summoned to the shore.

The mermaid was then baptised Muirgen ("sea-born"), but died immediately and ascended to heaven. She had forfeited another 300 years of life in exchange for a Christian soul. 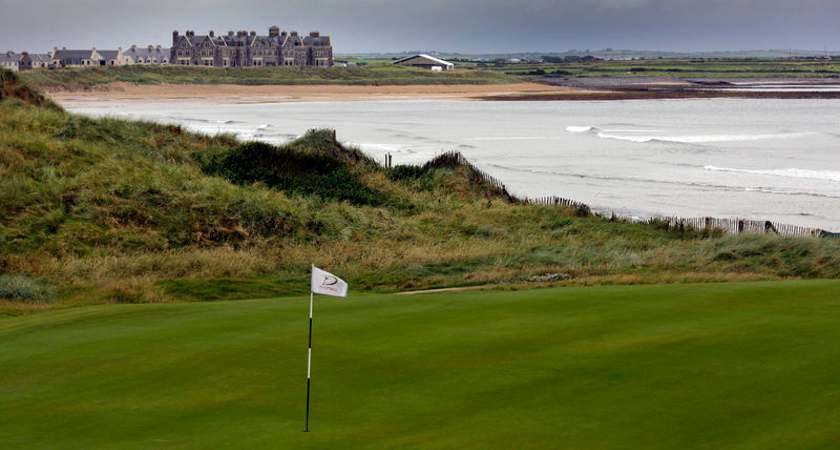 Doonbeg now plays host to Donald Trump's golf course, rather than a Palace of the Dead. Picture: Getty

Donn, lord of the dead, lives alone in a red palace – the home of those who have left life and gone to their ancestors.

Kings and warriors and old wise men, smiling mothers and proud queens, mourning widows and merry girls – all of them come to Donn's palace, far to the southwest of Ireland.

Donn is not evil. He does not enjoy slaughter like the dreaded Morrígan spirits of Ulster.

He watches and waits quietly, knowing that everyone will eventually visit his Red Palace, just as everyone will one day breathe a final breath.

5. The Last of the Fir Bolg (Aran Islands, Co. Galway) 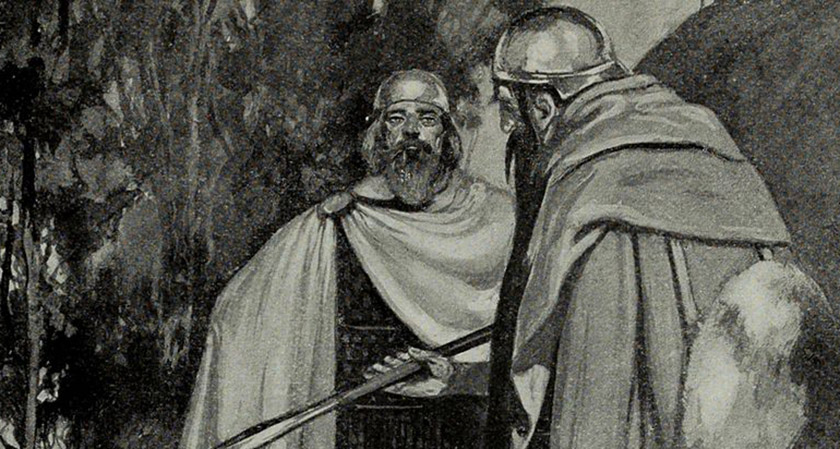 Ambassadors of the Fir Bolg and Tuath Dé meeting before the Battle of Moytura. Picture: Wikipedia Commons

The Fir Bolg were one of the ancient tribes of Ireland who were gradually driven to the extreme western shores of the country before their final defeat.

After 37 years of peace, invaders called the Tuath Dé arrive in Ireland. Their king, Nuada, demands that they be given half the island, but the Fir Bolg king Eochaid refuses. The two groups meet at the Pass of Balgatan, and the ensuing battle last for four days.

During the battle, Sreng, the champion of the Fir Bolg, challenges the evil Nuada to single combat. With one sweep of his sword, Sreng cuts off Nuada's right hand.

However, the Fir Bolg are defeated and their king, Eochaid, is slain by the spirits of death known as The Morrígan.

The Fir Bolg flee Ireland, never to be seen again. 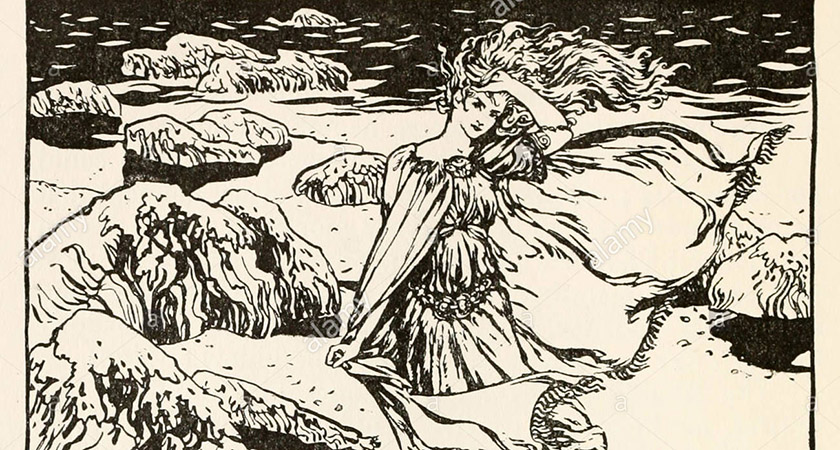 Becuma, a woman from a ‘many-coloured land’, is banished to Ireland for abandoning her husband.

She is noticed by Conn, an important king, when she arrives ashore. Becuma falls in love with Conn’s son Art, much to his disdain. She agrees to marry Conn if she sends the handsome Art away for a year – to give her time to learn to love Conn without distraction.

When Art arrives back after a year in exile, Ireland is in the midst of a great famine. Becuma challenges Art to a game of chess and loses.

As a penalty, Art instructs her to leave Ireland until she locates the ‘wand of Curoi’, a task he thinks will be impossible.

But Becuma finds the wand easily. She instructs Art to leave Ireland until he located Delvcaem – the daughter of a mad magician.

Art undergoes a long quest full of trials and dangers before freeing Delvcaem from her evil parents and returning to Ireland.

Upon reaching Ireland, Delvcaem curses Becuma to leave and never return. Becuma leaves Ireland and becomes a queen in a far-off country. 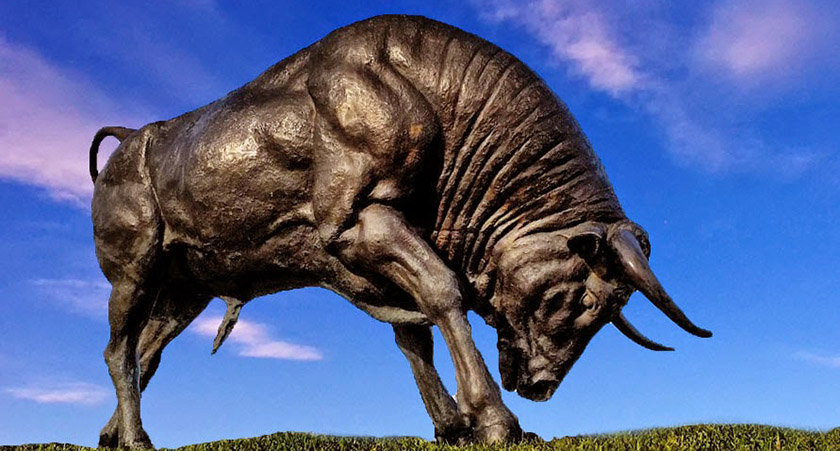 The Táin Bó Cúailnge is well known, but the Battle of the Bulls is a hidden gem. Picture: Getty

The tale comes from the great Irish epic of Tain Bo Cuailnge.  The story concerns a great cattle raid in which Ailill and Maeve, king and queen of Connacht in the west, attempt to steal the Brown Bull of Cuailnge from Ulster in the north east.

When the owner of the Brown Bull balks at lending him to them, Ailill and Maeve amass a great army to go after the bull, despite omens of certain disaster for their warriors.

After stealing the Brown Bull, Ailill and Maeve bump into Finnbennach – the beast’s greatest enemy. The battle is so bloody that men slip in the blood, and gore ‘covers the green fields’.

The Brown Bull shows up the next morning bearing the mangled remains of his enemy, and after staggering about for a time, mortally wounded, also dies.

Ailill and Maeve make peace with the Men of Ulster, and everyone goes home. So much for holding a grudge.

Legendary Ireland - Myths and Legends of Ireland by Eithne Massey is out now, published by O'Brien