Lovelocks on the Ha'penny Bridge, Dublin.

The bridge across the city's River Liffey was first built in May 1816, but how did it get its famous nickname?

Here are nine things to know about Dublin’s beloved bridge...

In the days before the bridge was built seven ferries were in charge of getting Dubliners from one side of the Liffey to another, the ferries were run by William Walsh.

As the ferries began to fall into disrepair, Walsh was informed he would either have to renovate them or construct a bridge.

The bridge was the idea of the Dublin Corporations’ s John C. Beresford. Despite the £3,000 cost Walsh chose to construct a bridge.

Around 85 per cent of the ironwork is the original metal. For 184 years it was the city’s only pedestrian bridge across the Liffey. 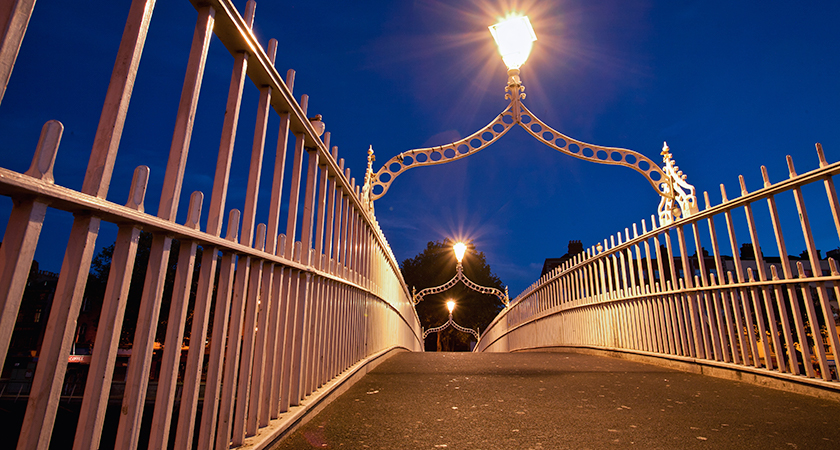 The Ha'penny Bridge at night

What’s in a name?

Officially the Liffey Bridge since 1922 - likely an attempt to shake the bridge of its colonial origins - it is still commonly known to Dubliners as the Ha’penny Bridge but neither of these were the intended name when it first opened.

It was originally to be called the Wellington Bridge after the Dublin-born Duke of Wellington, in recognition of his defeat of Napoleon at Waterloo a year previously.

This didn’t stick and in fact many of the city's inhabitants took to referring to it as the Triangle Bridge.

This was a sardonic nod towards the controversial background of John C. Beresford. A former Tory parliamentarian, Beresford had actively apposed the United Irish rebellion.

His riding school premises in Dublin had become known by republicans for the vicious beatings given to prisoners in the aftermath, in particular the practice of flogging prisoners upon a triangle scaffold.

The bridge's most famous moniker comes from the price of the original toll to cross, designed to match the levies of the ferries it had replaced.

As with all things the price rose, settling at a penny-ha'penny.

It was eventually dropped altogether in 1919 but not before its turnstiles has encountered some infamous fair dodgers.

J.J Scollan, a member of a small-armed group called the Hibernian Rifles bragged about evading the toll during the Rising.

We proceeded the Metal or Halfpenny Bridge – eighteen of my men and nine Maynooth men. Incidentally the toll man was still on duty on the Bridge and tried to collect the halfpenny toll from us. Needless to say he did not get it.

A condition of its construction was that if Dublin’s citizens found the bridge and its toll to be ‘objectionable’ during it’s first year, the bridge would be removed at no cost to the city.

The bridge, despite being symbolic of Dublin city, was actually constructed in Shropshire England.

The ribs of the bridge where individually cast in 18 separate pieces by the Coalbrookdale Company and then shipped to Dublin.

Once in Dublin, John Windsor - one of the company’s head foremen - oversaw construction.

Coalbrookdale had become well-known for its decorative iron work, having also been responsible for the gates of London’s Hyde Park.

In 2001 the number of pedestrians using the bridge on a daily basis hit 27,000 and it was high time for a structural survey. Perhaps unsurprisingly it was found that renovation was required.

The bridge closed for much of the year, finally reopening in December. Repair work was entrusted to Belfast-based engineering company Harland and Wolff.

It was rebuilt to contain as many of the original components as possible and upon completion it was given a fresh coat of white paint. 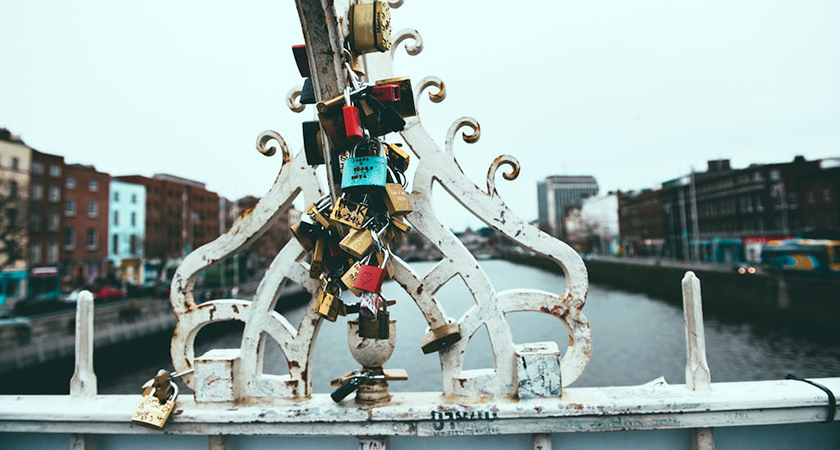 Lovelocks on the Ha'penny Bridge, Dublin.

The scourge of metal love tokens which has plagued bridges from New York to Paris has not spared the ha’penny.

In 2012, Dublin City Council first begun removing the metal padlocks placed on the bridge by lovers citing a maintenance risk to the bridge.

The following year the council was forced to removed over 300kg of padlocks from the bridge.

Signs have been put up since pleading with visitors to not to celebrate their romance by clamping padlock to the ironworks.

The milestone was celebrated with a symbolic procession across the bridge led by the Lord Mayor of Dublin Críona Ní Dhálaigh and descendants of J.C. Beresford and of John Windsor.