Eddie Collins, 82, takes on his challenge next week

OCTOGENARIAN businessman Eddie Collins is to reach for the skies next week by completing an exhilarating wing walk on a biplane.

The Dublin-born businessman, who has lived in Britain for more than 50 years, is fundraising for the Irish humanitarian aid agency, GOAL.

On June 3 he will follow in the footsteps of Hollywood stuntmen by walking along the wings of a Super Stearman Biplane while it is in flight in Gloucestershire.

Mr Collins will embark on his daredevil challenge in an aircraft flown by a highly experienced wing walking display pilot.

He will take to the skies safely strapped onto the top wing to experience an exciting series of flypasts, zoom climbs, and steep dives in front of the family and friends at speeds of up to 130mph.

The businessman is a dedicated corporate supporter of GOAL.

After he sold his UK company, he realised a conventional retirement was not for him and he was inspired to do a breath-taking wing walk following a call from GOAL CEO, Siobhan Walsh, after C-K0 donated to Goal Zimbabwe to build a waterhole for a rural community. 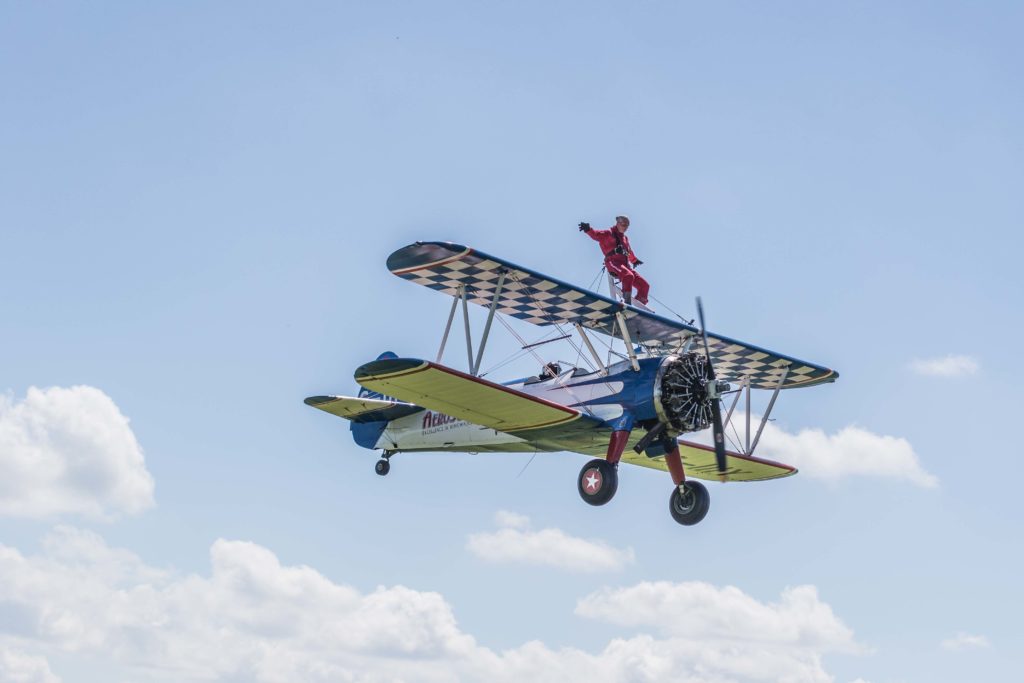 Through a family connection Mr Collins had heard about GOAL’s work in Zimbabwe and became aware in 2019 that a community centre in Mbare, a high-density suburb in Harare, was struggling with access to safe, clean water.

The community centre supports 800 vulnerable people, including young children, widows, adolescents, mothers looking after children with disabilities, and people who are HIV positive.

“I learned that the community struggled to access clean water for drinking and cooking,” he explained.

“As in so many countries in which GOAL works water sources are often contaminated, carrying diseases such as Cholera and Typhoid. This can be fatal to those living in desperate poverty,” he added.

CK-O International was delighted to donate towards the drilling of a borehole as part of a GOAL Cholera Response project.

Before the new borehole was drilled, the centre, which provides vital supports including HIV care and prevention, skills training and psychological services, often had to close, cancel services, and send people home because water was not available.
Now there are plumbed toilets and clean treated water, meaning those using the centre don’t have to face dangerous walks to reach the closest water source.

As well as supporting over 800 beneficiaries, the fresh water supply is serving thousands of people in the Mbare, with community members going to the centre to fetch drinking water using 5-litre bottles.

“When Covid-19 kicked in I had a good think as to how I could help raise the profile of GOAL in the UK,” Mr Collins explains of his latest project for the charity.

“I always had a fascination with biplanes and did a flight on a Spitfire a few years ago, something I found to be an amazing and emotional experience.

“I read an article in a newspaper on wing walking, and I thought this was the perfect challenge for me.”

He added: “I am doing the wing walk for Goal because of the inspiring work they are doing in 14 countries around the world, changing the lives of millions of vulnerable people.

“GOAL is an amazing charity founded over 40 years ago in Ireland.

“Last year it reached more than 17 million people with support in the areas of nutrition, health, emergency response and livelihoods in Africa, the Middle East and Latin America.”

This week GOAL Fundraising Director, Eamon Sharkey, thanked Mr Collins for his support and wished him well with his impending challenge.

“Without dedicated supporters like Eddie, GOAL would not be able to support the millions of vulnerable communities around the world we reach each year,” he said.

“He already has impacted on a community in Zimbabwe with his work, and through funds raised from this challenge we will be able to support many more people.”

Mr Collins will do his Wing Walk at the RFD Rendcomb Aifrield in Cirencester, Gloucestershire, on June 3, 2021.

For further information or to support the challenge click here.