ON THIS day in 1966, one of the last remaining testaments to Britain's occupation of Ireland was destroyed.

Nelson's Pillar, also known as Nelson's Column, used to stand on O'Connell street-- once named Sackville Street before it was renamed in honour of Daniel O'Connell, who fought for the emancipation of Catholics in the 19th century.

The pillar was built in 1809 when Ireland was still under the rule of the British Empire and depicted Horatio Nelson, an Englishman celebrated for his win at the Battle of Trafalgar.

From the very beginning, despite being a popular tourist attraction, Nelson's Pillar drew controversy from a growing number of Irish nationalists who wished to see Ireland returned to being an independent country.

As the 19th century wore on, and particularly after Ireland was devastated by the famine with very little help from Britain, the calls for an independent Ireland grew-- and the tribute to the Englishman faced further calls to be removed.

There had even been an attempt to blow up the column during the Easter Rising of 1916, but the explosives became damp and failed to ignite, and the pillar would remain for a further 50 years. 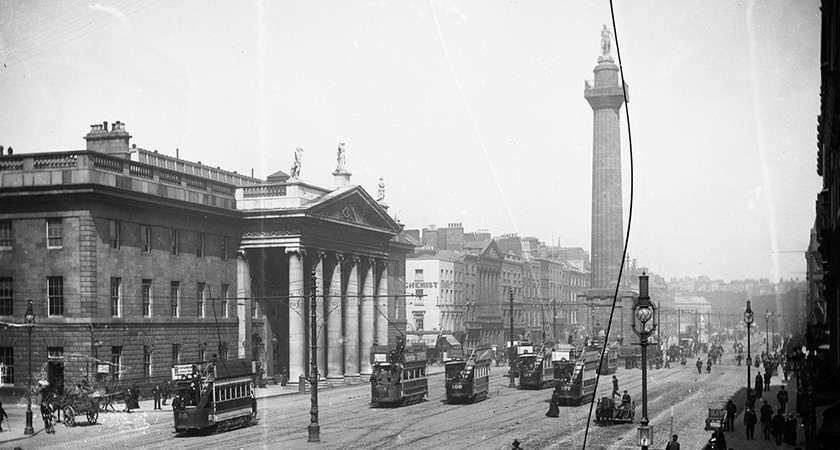 Nelson's Pillar (to the right) picture in Dublin. (Picture: WikiCommons)

Even when the failed uprising sparked a huge cry for an end to the British occupation of Ireland and led to the War of Independence, the Civil War, the creation of the Irish Free State, and later, the Republic, Nelson's Pillar still remained in Ireland's capital city.

Throughout all of these vital moments in Irish history, there still remained a debate as to whether or not the pillar should be removed-- a trust had been set up when Nelson's Pillar was first built, which maintained that the trustees must preserve the monument forever.

Multiple Irish governments had attempted to deliver legislation overriding the trust, but each failed, and it seemed the testament to Ireland's occupation would remain on the capital's streets even as other monuments were removed or destroyed.

This all changed in the early hours of 8 March, 1966, as the Irish Republic prepared to mark 50 years since the Easter Rising.

O'Connell street was mostly deserted when explosives obliterated the upper portion of the pillar, sending the statue of Horatio Nelson and hundreds of tons of rubble cascading on to the street. 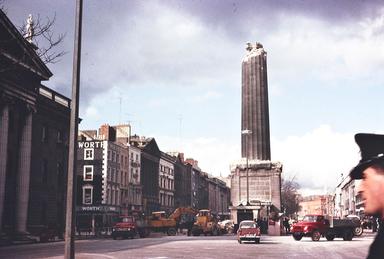 The remnants of Nelson's Pillar on the morning of 8 March, 1966 (Wiki)

There were no casualties, and even the damage to the street was minimal, and while the Irish Government spoke out in outrage-- possibly due to the event taking away from the planned celebrations of the Easter Rising-- public opinion was, in the majority, positive.

The IRA had always been suspected of leaving the explosives and destroying the monument but this was never proven, and the remnants of the column-- now just a large, jagged stone-- were eventually removed by the Irish Army.

For decades, nothing stood where the tribute to Horatio Nelson had towered over the people of Dublin-- until 2003, when the Spire was built, now one of Ireland's most recognisable landmarks.

As for what happened to the statue-- the head of Horatio Nelson is on display in Dublin City Library and Archive on Dublin's Pearse Street.