AN important archive documenting the history of the Irish community in Britain has undergone a major digitisation project.

The Archive of the Irish in Britain (AIB) is a collection which began in Kilburn, north London in 1984.

Back then it was held by the Irish in Britain History Group and consisted of documents, photographs and oral history recordings compiled by group members interested in recording the histories of Irish migrants to this country.

It moved to London Metropolitan University in 1984, where it remains, although now it comprises thousands of documents, photographs, books, videos and audio recordings covering a wide variety of subjects connected to the experience of Irish people in Britain.

Now that wealth of information and historical insight is available to those interested in viewing it through the University’s website, thanks to the recent digitisation of the collection. 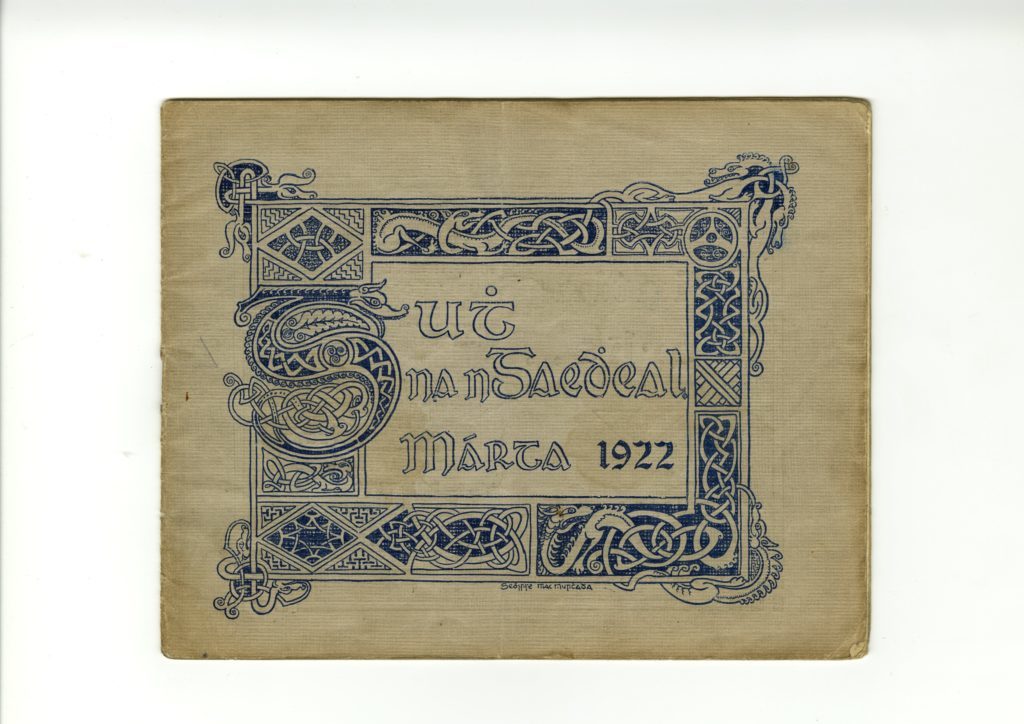 This St Patrick's Day programme, dating back from 1922, is among thousands of items within the collection

Dr Tony Murray, Curator of the AIB, explained: “The purpose of digitisation has been to ensure that records of the Irish in Britain are preserved for posterity and disseminated, as widely as possible, for the benefit of current and future generations of Irish people at home and abroad.

“The digitisation of the Archive of the Irish in Britain will further inform and deepen understanding of the Irish diaspora. In so doing, it will continue to contribute to the strengthening of Irish-British relations in years to come.”

He added: “The contents of the Archive are now visible through our website for everyone, including those hitherto prevented from accessing them due to geographical distance or impaired mobility.”

Dr Murray and fellow faculty members revealed the successful completion of their project – although they are always adding to the collection - at a launch event held at the University last month. 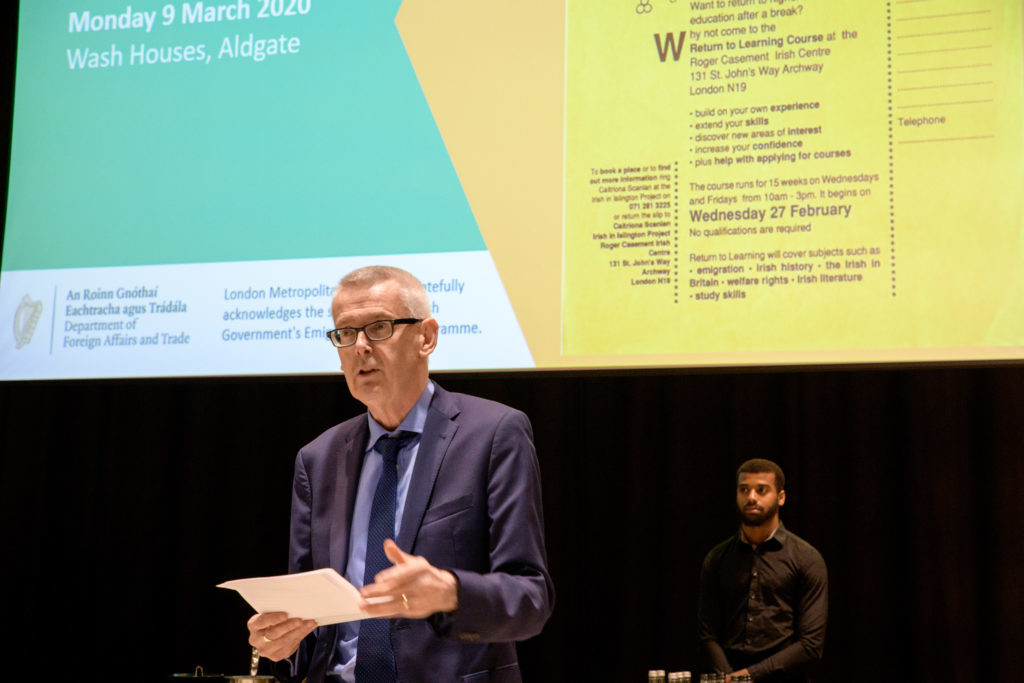 With funding for the project provided by the Irish Government’s Emigrant Support Programme, Irish Ambassador Adrian O’Neil was among those in attendance for the launch.

“This digitisation project will allow far wider access to this treasure trove of material on the Irish community in Britain and is therefore of immense significance for all of those who care about the stories of Irish women and men on the neighbouring larger island in all its complexity, its richness, its successes and its adversities,” he said on the night.

Irish actor Stephen McGann, well-known for his role in Call the Midwife, but also the star of the popular RTE mini-series The Hanging Gale of the 1990s, was also a special guest at the launch event.

Addressing the many who had gathered to celebrate the project, he told the room the history of his own family, who left Roscommon following the Famine and found themselves in Liverpool.

“I am a UK-based actor,” he said, “but what’s perhaps less well known about me is that I am a keen genealogist.

“I love archives…and I can usually be found extolling the virtues of archives online and offline whenever I can,” he added.

“I have been perusing the records of Britain and Ireland now for more than 40 years, scouring the data of generations gone by for those voices from my own past, unheard voices that thanks to the efforts of people like Tony [Murray] and many more in this room, have been able to give me a priceless insight into who I might be and why I might be.

“But I am just another part of that massive Irish diaspora that landed in Britain from Ireland over the last few hundred years.

“In my case it part of the immense legion of the hungry and the homeless who hit the port of Liverpool during and just after the great famine of the 1840s.”

McGann, who brought his musician son Dominic along with him for the event held in the University’s Aldgate campus, went on to explain that his impoverished family endured “grim” lives in Liverpool’s “filthy slums” before gradually carving a way for themselves in Britain which saw them become merchant seamen and later professionals and  “even actors”. 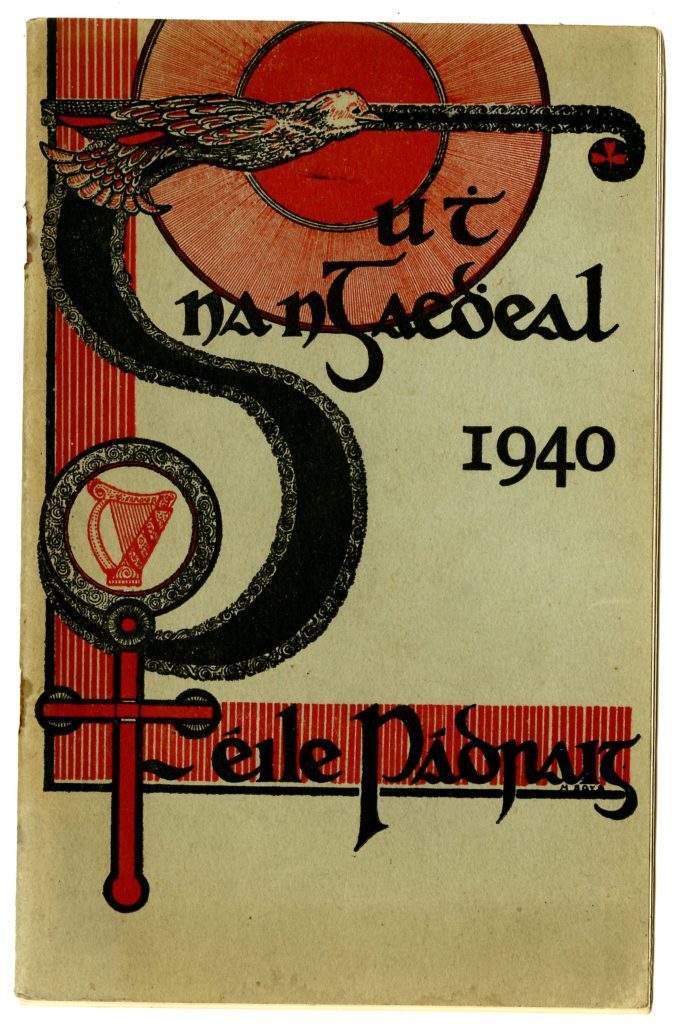 This St Patrick's Day programme is from 1940

“It’s no wonder that I would be interested in an archive such as this,” he added.

“The precious gift of personal narrative has too often been an exception rather than a rule on the story of the Irish in Britain.

“My family for instance were very very poor, now anybody who knows about historical archives and research knows that as a general rule, the poor leave the fewest records, you skate through history like a silent mute thing.

‘The richer you are the more they pin you down with records – not my lot.

“And a constantly shifting population of immigrants will leave even fewer records.”

He explained: “I know my great, great granddad was a musician – it says so on his record, but I don’t know what instrument he played.

“So, my interest in a digital archive like this one is obvious – the Irish are an immensely narrative people, they carry their stories inside them and it’s no accident to me that the Irish have contributed so much to British culture through literature, through music through dramatic art.

“The anecdotal traditions that have sustained the Irish diaspora through time and across continents, it demands an archivist’s ear, actively attuned to personal human stories, community experiences, that’s the value of this collection.”

The Archive of the Irish in Britain can be accessed at www.londonmet.ac.uk