IRISH convicts held in a former prison located off the coast of Co. Cork will be remembered this year as centenary commemorations get underway.

On February 19, 1921 as the Irish War of Independence raged, a British Military Prison was opened on Spike Island for Republican prisoners and internees.

The bloody struggle for Irish Independence was seeing huge numbers arrested for insurgency activity, and the British needed somewhere to hold them.

Spike Island was again the answer to a spiralling British prisoner problem, having been used as a prison by Cromwell in the 1600’s and as a convict prison during the Famine years of the 1840’s.

Republican prisoners and internees were sent to Spike Island from the civilian gaols in Cork, Kilkenny, Waterford and Limerick and from the military barrack and camps in Bere Island, Buttevant, Cork, Fermoy, Kilkenny, Kilworth, Moore Park, Tralee and Waterford.

In total men from eight southern counties were held on the island and at its largest the prison held over 500 men.

Prisoners were men arrested by Crown Forces and later charged, tried, convicted and sentenced to imprisonment by Military Courts.

Internees were men arrested on suspicion of their involvement in Republican activities and imprisoned without trial. There were approximately 900 internees and 300 prisoners held on Spike Island during 1921.

There were men from almost all the towns in the counties in Munster as well as from counties Kilkenny and Wexford. Almost every town in these counties was represented. 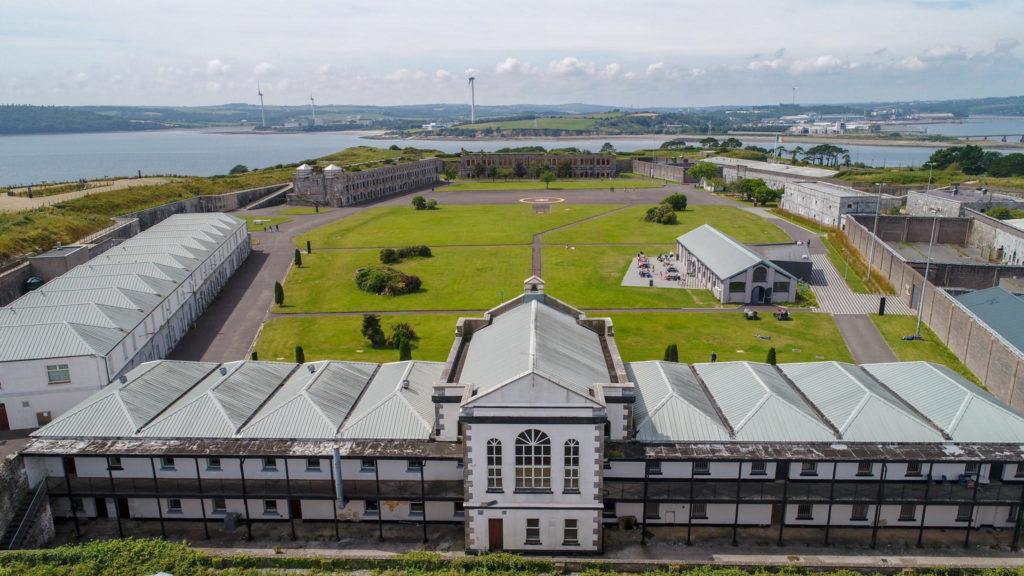 A British military prison was opened on Spike Island in 1921

The following are just a fraction from each county;

Tragically, Patrick White from Meelick, Co. Clare, was shot and killed by a British sentry while playing hurling.

Dick Barrett, Sean Moylan TD, Denis Murphy, hunger striker Joe Kenny, five of the men captured at Clonmult and Moss Twomey who later became Chief of Staff of the IRA were among the large number from county Cork held on Spike Island.

During 1921 there were two dramatic escapes from Spike Island involving ten republicans.

On the 30th of August, a hunger strike began for unconditional release, lasting four days before being abandoned.

On the 16th of October, the internees began rioting and breaking up their huts, to force the British military authorities to release them.

When the British soldiers regained control, they forced the internees out into the dry moat, where they endured three cold, wet days and nights without shelter.

On the night of November 16/17, the last republican prisoners were moved from Spike Island to Kilkenny Gaol.

On November 18 all the internees from Spike Island were taken to Cobh and transferred by special train to Maryborough (Portlaoise) Prison.

The Spike Island Military Prison in the Field was closed.

Island historian Tom O’Neill said “We have been researching and planning for this commemoration for close to a decade, painstakingly tracking down the available information, much of which is now located in London.

The period is an important part of the island and Ireland’s history, and we look forward to sharing it with the world”. 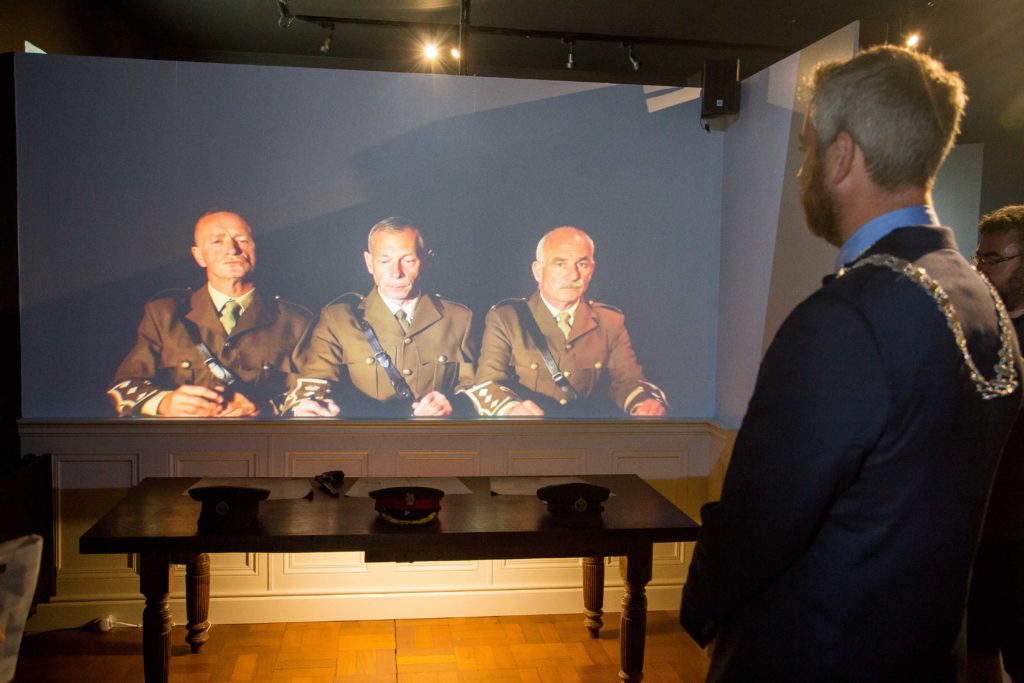 To commemorate the lives of the 1200 men held on the island, Spike Island is launching an exhibition entitled ‘Imprisoning a Nation’.

The exhibition will focus on the 1921 prison and the stories of the rebels held there are told in great detail.

The exhibition is an extension of the island’s permanent ‘Independence’ exhibition, which tells of the wider Irish independence ‘road to freedom’ from 1914 to 1921.

The island was brought into the story of the 1916 Easter rising when the crew of the Aud were held there, a German gun running ship which was intended to supply the rising with arms and ammunition.

The tri lingual Aud exhibition, told in Irish, English and German, includes some original ‘Aud’ artefacts recovered from the seabed.

The story continues to the outbreak of the War of Independence in 1919 and culminates in the story of Spike Island’s 1921 prison and its approximately 1,200 republican prisoners and internee.

There are original autograph books, medals and other artefacts connected with the men held on Spike Island.

There are also approximately one hundred and fifty photographs of the men held on display, and the exhibition puts a real connectable face to the names.

There are two very detailed databases available for use by visitors where they can research the story of the men, finding them by surname, birth county and place of arrest.

To commemorate the centenary in 2021, a principal commemoration is planned during the June bank holiday weekend, which is being funded by the Cork County Council Commemoration grant scheme, Covid conditions allowing.

In addition, it is intended to commemorate the other events that occurred on Spike during 1921, including the escapes, the shooting of internee Patrick White, the hunger strikes, etc.

Quite a few of the families of the men are planning to hold their own special commemorations on Spike on the centenary of the date when their relatives were transferred to the island, and many have already been liaising with the island’s heritage team to plan their special events.

Families are expected from as far away as Australia to celebrate their connection to the island.

Island manager John Crotty said: “The response [to the centenary] from the public has been considerable with a large amount of people volunteering original autograph books, artefacts and information about their relatives.

“Many people have discovered unknown links to rebels within their own families, which is a credit to the island research team.

“We would encourage anyone with any artefacts or story connected to the island to contact us, so we can catalogue the details”. 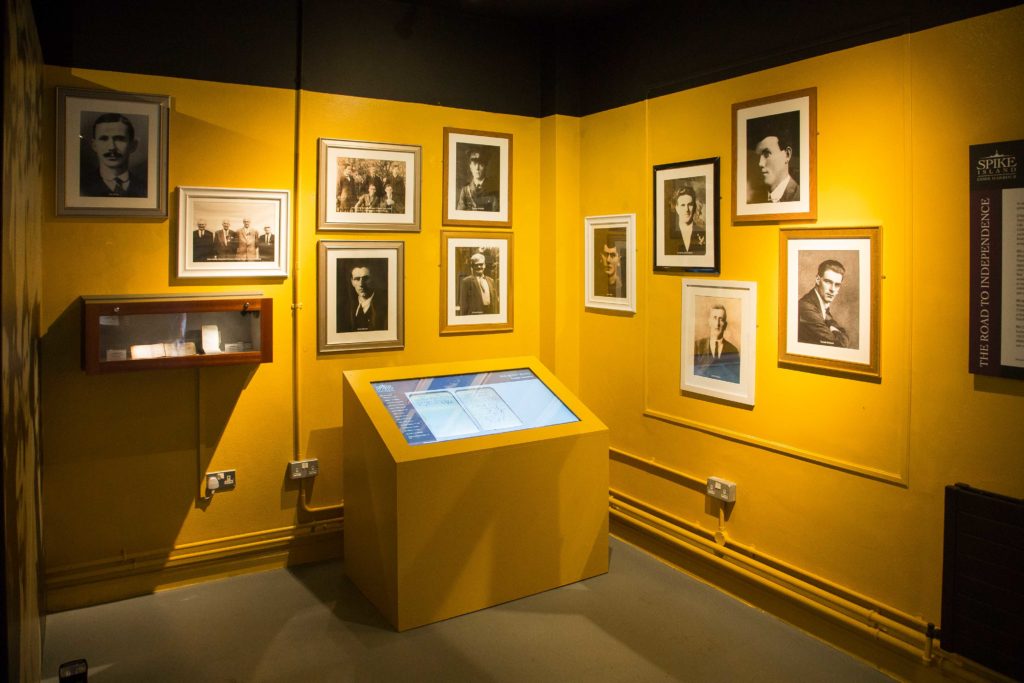 Artefacts and other items of historical importance as the Independence exhibition located on Spike Island (Pic: Michael O'Sullivan/OSM PHOTO)

In July 2010, the island was handed over to Cork County Council to be developed into a tourist attraction, opening its doors in 2016 following a €6.5 million Euro upgrade.

Since then, with the backing of owners Cork County Council and assistance of Fáilte Ireland, the wonderful heritage of Spike Island has been developed and expertly interpreted.

The island has a rich history, including use as a monastery in the 7th century, and saw centuries of quiet farming life.

The eyes of the world turned to the 104-acre outcrop in the late 1700’s when the British built the first of three forts on the island, built to defend the world’s largest navy and protect the world’s second largest natural harbour.

The third fort, started in 1804, is the 24-acre colossal that stands to this day, one of the largest star shaped forts in the world.

That same fort became a prison during the famine years and its convict numbers swelled to over 2300, making it the largest known prison in the world and the largest ever in Ireland or Britain.

It returned to military use in the 1880’s and after the 1921 prison opened and closed, another 17 years of British occupation followed.

In 1938 the island was handed from Britain to Ireland and it was occupied by the Irish Army until 1979 and the Irish Navy until 1985.

Visitors today can learn about this rich history in several museums, exhibitions, and original buildings, including the Gun Park - where a comprehensive collection of original artillery guns and vehicle are displayed.

Visitors can also walk the halls of the ‘Punishment block’, the original 1850’s prison, and the modern cells built following a riot on the island in 1985.

The island is anticipating high staycation demand in Ireland in 2021 as visitors shun risky foreign travel and rediscover their own heritage, particularly in this centenary year.

THE BURNING OF CORK: Marking the centenary of one of Ireland's darkest days

Moral Murderers? Why the ambush that sparked Ireland’s War of Independence remains controversial 100 years on