In The Thick Of It Part 2: Westminster on the inside

In the second of a four-part series, our roving reporter James Martin gets to grips with Parliamentary matters as a guest of MP Paul Flynn

FIRST things first. Over lunch in the politician’s cafe at Portcullis House, Westminster, I had a topside beef roll, a Mars bar and a bottle of water. The bill was £5.50 and, yes, I hope to claim back the meal on expenses.

I’m sat with Paul Flynn, Labour MP for Newport West, who has been a Member of Parliament since the general election in 1987. It’s been a busy morning spent shadowing the long-serving socialist politician.

Earlier I emerged from the top of the stairs at Westminster Underground station to be greeted by the huge golden splendour of Big Ben, which looms overhead as the Thames trickles quietly under Westminster Bridge.

Around the corner, Portcullis House — where MPs carry out their day-to-day office work — is a brown, slightly brutish and unremarkable building.

Inside it’s much nicer. After the obligatory airport-style frisking at security, a pair of revolving doors take visitors into a modern-looking reception area with a high glass-panelled ceiling.

High trees cut two parallel lines through the airy and spacious room that is completely spotless, notwithstanding an unsettling portrait of Margaret Thatcher which hangs from a far wall.

Over coffee and toast, Flynn works away busily at an Early Day Motion.

EDMs, I learn, are a tool used to test the choppy waters of parliamentary opinion. Printed on the day’s Order Paper, MPs can draw attention to any issue they wish on these freely-distributed leaflets.

The longevity of the motion will depend on the ‘continuous creation’ of further signatures.

Flynn, who is 78, comes from strong Irish stock — one half of his ancestry came over after the Great Famine.

In his autobiography, Flynn recounts vivid tales told to him of his Irish forebears. In particular the unwelcoming time they faced upon arriving as immigrants at the port in Cardiff.

“TheWelsh capital city in the 19th century was,” he writes, a time where prejudice was respectable amongst the indigenous population where the Irish, “had been stoned as they walked from the Cardiff docks where they had arrived down the length of Bute Street. They ran the gauntlet from the berth of the Cork boat to the Irish haven in the enclave of Newtown.”

The MP’s book portrays a further insight into a colourful life history. His father, James Flynn, was a machine gunner who was shot in the leg in Flanders during the First World War, only escaping death after being rescued by a German soldier.

Paul Flynn’s professional reputation is one of a bold and brave backbencher; an on-going thorn in the side to the Conservative party; a rebel with a number of causes.

Two further examples from his autobiography demonstrate this. 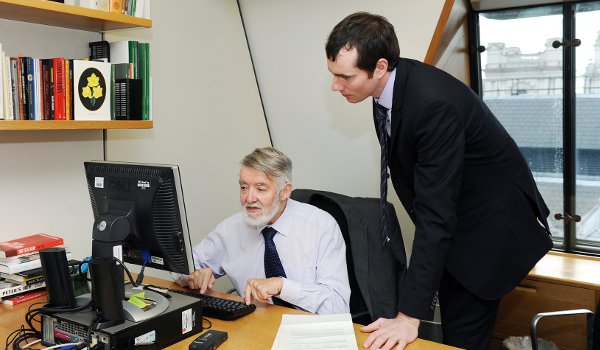 Taking influence from an 1839 Chartist Rising — a working-class political movement — in Newport, Flynn attempted to table a referendum about what would happen following the death or abdication of the present monarch and whether or not they should be succeeded.

The left-leaning politician has also campaigned strongly for the decriminalisation of drugs and the legalisation of medicinal marijuana, something which led to the bizarre situation of being taken up as a spiritual father of the mock Newport rap group Goldie Lookin Chain.

Flynn, who is affable and welcoming troughout the day, has suffered from arthritis since his youth. His hunched gait and use of a wheelchair hasn’t slowed him down in Parliamentary matters though as he takes a seat on three Parliamentary committees.

Breakfast over, there’s just enough time for some light-hearted pointing out of ‘frothing-at-the-mouth Eurosceptics’ in the main hall before we’re whisked up to the fifth floor of the House in a plush elevator.

Flynn’s longevity has afforded him two small adjoining rooms, where normally the support staff would have to share with another MP.

The morning is a flurry of activity and it’s apparent that no two days in the office are the same.

A Swiss television crew shows up. Flynn, a fluent Welsh speaker, greets the reporter in French. It turns out the journalist is from the Italian region of Switzerland, but the effort draws appreciation nonetheless.

After the interview, in which Flynn’s opinions on immigration are sought, it’s on to the everyday humdrum of constituency matters and preparation for committee meetings.

My host for the day is also a keen blogger who has an award-winning website, and while I’m present sends out a tweet in support of President Obama extending an olive branch to Iran.

At midday, it being a Wednesday, it’s time for the weekly Prime Minister’s Questions.

An escalator takes us under a stately walkway (that looks to have been ripped straight from a public school-yard) into the history-steeped Westminster Hall, through St Stephen’s Chapel and into the Commons.

The gallery is large and brightly-lit, but there’s something of a claustrophobic feel in the air as members, press and visitors cram in 10 minutes before kick-off. 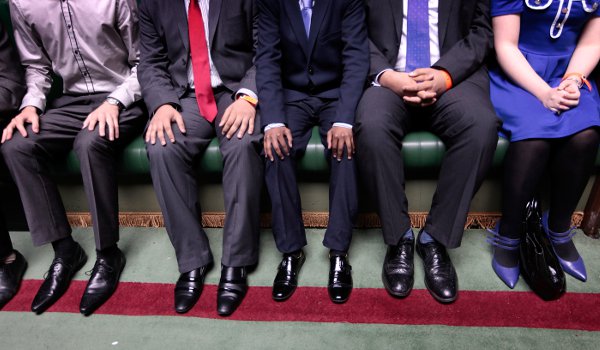 The pomp and procession of a live Prime Ministers Questions is worth seeing at least once.

An amusing moment occurs as MPs continue to trickle in. The Liberal Democrat leader Nick Clegg walks in, he hesitates, stops and looks across the front bench, unsure if he’ll fit in a narrow seat space next to the Prime Minister.

Metaphors ring through the mind.

Today it’s David Cameron who comes out on top in what is a boorish fest of yelling and grunting, moments of which remind me much of my last day spent sheep dipping on a farm in Scotland.

I have to admit though I’m somewhat won over by my morning in Parliament. While a big part of the job appears to be spent in an endless stream of talking, a lot of time (for the politician I’m shadowing at least) is spent probing issues of the day and holding fellow MPs to account.

It’s a fairly stark contrast to the view of politicians you get in most tabloid papers, where the picture is painted of Parliament being one big power-thirsty lads club.

We’re back at the lunch table at the café. Expenses are on the menu once more.

In his most recent book, How To Be An MP, which proves a witty and interesting look at the nuances of the profession, Flynn writes:

“The manipulation of greed still seeks to corrupt the power of Parliament. The fumigation of the Palace cannot prevent its re-infestation.”

Flynn has mostly stayed clear of the worst excesses of the double-jobbing, second-home flipping scandal.

I ask what’s it like having to go to work every day and inevitably bumping into enemies around the House.

The MP replies that he usually tries to keep a mock sense of humour about such encounters.

One such time, at the lift in Portcullis House, Flynn met an unnamed MP who had been heavily implicated in the expenses scandal.

The MP was shuffling a large suitcase, most likely on his way to home to his constituency, where politicians normally return to on Thursday afternoons. Flynn laughs as he remembers how he broke the ice that day in the lift.

“I pointed to the large suitcase and said ‘Do they give out expenses in cash now?’”