In the final part of his In The Thick Of It series, James Martin faces the challenge of five minutes of stand-up comedy in front of a live audience.

“THIS could be the worst five minutes of your life,” Jarlath Regan tells me, ominously, over a cappuccino.

It’s late in London’s Leicester Square and the comic has just finished his set next door at 99 Club.

I tell Jarlath my stand up debut is just a couple of weeks away but I don’t have any jokes. That’s his response.

I’m not sure I’m up for this. Having spent years honing an extraordinary talent for evading public speaking at any opportunity, this is deep-end stuff.

Fate seems to be against me though. My plan to complete my Irish Post In The Thick Of It series working as a doorman outside an Irish club hit a legal minefield.

And so it was to be… my next and final challenge — stand-up comedy in front of a live audience.

What did I have in my favour? Well, there was not one but two leading Irish comedians to draw on for advice.

I phone Andrew Maxwell. In his gravelly Dublin accent, he advises: “Remember, you are the f****** joke. You are the only individual in the room that is so psychologically vulnerable that you need the unconditional love of absolute strangers.”

Great! Thanks. To be fair, later I troll the interview transcripts and there’s plenty of good stuff there too.

I spot the overlap I was looking for.

First, Jarlath Regan warns against pulling any tricks on the audience.

“Go up and let it be the most honest reflection of what you believe to be funny. And believe in the jokes you are going to say — mean them,” he says.

Maxwell adds: “Only talk on-stage about what you find funny. Genuinely, what actually makes you chuckle. You’ll be far more excited to tell the audience. Don’t ever try and second guess them by writing material about what you think they might find funny.”

Got it! The next two weeks are spent scribbling away a collection of old stories, reflections on immature happenings and observations which have made me and my mates chuckle over the years.

For two days before showtime I barely leave the flat. My hopeful reasoning being that the more prepared I am, the fewer nerves I might experience.

At this point, I’m avoiding thoughts about something Jarlath said during our meeting. 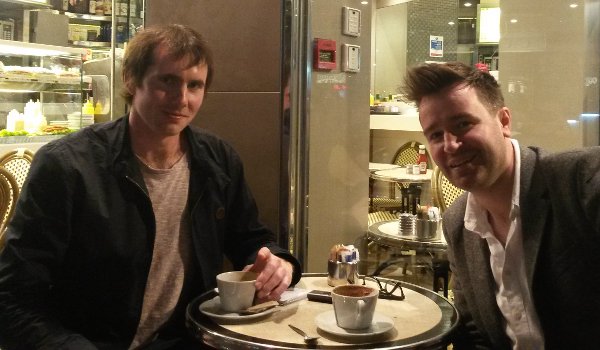 The Kildare man warned that, even having been at the comedy game for as long as he can remember, the pre-stage jitters “never go away”.

“Even if you went at this forever, and you’re Jerry Seinfeld, there’s still this anxiety for half an hour before you’ve gone on that’s worse than anything you’ve ever felt,” he added.

Wesley Dalton, a comedian and actor from Bray, is the cordial host and MCs the show, which celebrated its year-long residency last week.

On the night, Wes can see I’m nervous and tries to calm me down by reassuring me that no one in the audience is going to chop me up into pieces with a machete.

All I’m thinking at this point is: “How can he be so sure?”

What’s worse is that the day before, Wes gets an email from American actress Mary Lynn Rajskub who stars in the television drama series 24.

As well as acting, Rajskub does comedy and after she books up for five minutes Wes inevitably leaks the news on Facebook.

So what’s normally a busy night at Funny Feckers turns into a packed-to-the-rafters one.

The show is housed in a downstairs bunker at Hoot N’ Annie’s bar.

Picture the size of your richest childhood friend’s garage. Add at least 60 half-cut punters, plus, tonight, at least a dozen more clambering on the stairs for a view. Along with another handful front left, who are stationed so close to the stage you can almost smell their feet. 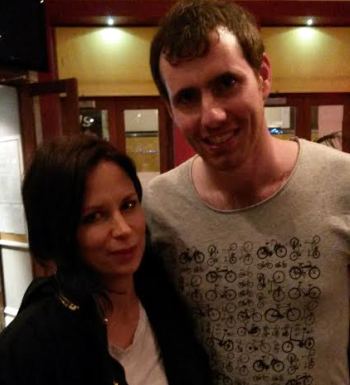 That was my view taking to the stage — the fifth act just before 8.30pm on the night.

The comics before me are pretty hot as well. Laughs flow and the place is buzzing.

Strangely, the fear has subsided a little as it dawns on me that ‘this is it, there’s no way of backing out now’.

Maybe laughter therapy does work, I think to myself, although no Zen-like calm comes over me as Wes introduces me to the audience as a newbie. Instead my attention shifts to the material I’m eager to deliver properly.

I recall the simple yet effective tip of smiling to the audience (cheers Jarlath). I don’t fumble taking the mic out or trip over the stand. It’s already going better than expected.

In fact, aside from a few flashing moments when I think I might have a total freak out and forget what to say, the set goes surprisingly well.

People are laughing; I’m pretty sure it’s with me and not at me.

Although most of my on-stage recollections swirl into a blur, an early crack about growing up around Sutton (which I describe, perhaps harshly, as a suburban mess in south London) — and unexpectedly having to return after university — goes down well.

The liberal north London crowd seems to enjoy my working-class tales leaden with lads on the smash, trips to the bookies and snippets of bizarre yet brilliant tales overheard while pulling pints for geezers in Chelsea tops at the local working men’s club.

I race through the first four minutes. When Wes tells me I’ve got less than a minute to go, I pull a final trick out of the bag to finish.

As it’s a free open mic, the acts can’t be paid. So I pretend to have to cut short the set before I’d had the opportunity to do a section about the internship culture which is commonplace among my generation.

My reasoning is that, before my current job, I’d clocked up many months of working for free trying to get into the creative industries; and therefore there was no way on earth I’d be clocking up even more minutes on the free by running over with this gig.

I tell the audience as much, and leave them there. It feels like a bold move and it works.

I can’t say for sure, but I think I even hear a few whoops as I weave my way through the crowd and off stage, the most relieved man in history.

Afterwards, someone even invites me to do a slot at their open mic night. Another comes up and gives me surely the greatest accolade possible: “You seemed naturally funny.”

After the endorphin rush from the night subsided, the inevitable question arose: Would I ever repeat the experience?

I don’t think so. As a natural worrier, preparing for this gig had been an exhausting few weeks where the rest of my life seemed to hit the brakes.

A final 48-hours of hermit-like existence as I practised delivering the set didn’t seem too healthy either.

The hours would be appealing, for sure. But it’d certainly be no cop out.

I’ve got friends trying to make their way up the greasy comedy pole and they’re out gigging at least three or four nights a week.

They have to put up with low turnouts in dingy rooms, entering crap competitions (which, given the voting systems, are often won by whoever brings the most pals along) and endless self-promo work.

Plus there must be thousands upon thousands of others in exactly the same boat trying to catch the same break.

Nope. For me, I suspect it’ll go down as another one ticked off the list.

As you might do after going to see old ruins like the Giant’s Causeway or the Rolling Stones.

Funny Feckers is hosting the final show at its current venue - Hoot N Annies - in Kentish Town on Wednesday (June 25) at 8pm. Find out more here.

Looking back over the series:

Part One: A New Year’s challenge — sheep dipping on a farm in Scotland

A long-term city dweller, James got his hands dirty with some real work. He joined up with farmers at Penmanshiel Farm, near Berwick, where he undertook an exhausting morning helping to sheep-dip — an annual ritual whereby animals get dunked into a vat of organophosphate. After counting 400-odd sheep  through the turnstiles, sleep was no problem that night.

Part Two: Westminster on the inside

James found the transition from the snarls and grunts of the wayward sheep to those heard at a live Prime Ministers Questions almost seamless. He spent a day with MP Paul Flynn, a Labour representative at Newport West with strong Irish roots, where he got an insider’s view of an ordinary day in the life of a serving politician in Westminster.

James got a taste of working in a leading London restaurant. The authentic experience included an excruciatingly early start time of 4.30am, a trip to New Covent Garden Market for fresh fruit and veg — where he met up with acclaimed chefs Chris and Jeff Galvin — and a stint cooking at the Michelin-starred La Chapelle.

See More: Comedy, In The Thick Of It, Series, Stand-up

Comedian Katherine Ryan sends message of support to Together For Yes