2020 in review – a year dominated by Covid, Brexit and one or two important elections

The UN designated 2020 as the International Year of Plant Health, but as we now know within weeks it was to become the year of human Ill-health.

Few areas of the world escaped the effects of Covid-19, a disease which can vary in intensity from mild flu-like symptoms to painful death.

To paraphrase Shakespeare, coronavirus is truly a plague on all our houses.

The devastating global pandemic brought with it untold grief, a curtailment of travel and social activities and economic turmoil.

In the US the coronavirus death rate soared, while the Black Lives Matter protests raged and the presidential election campaign reached its conclusion, with President Trump finally getting us marching orders. 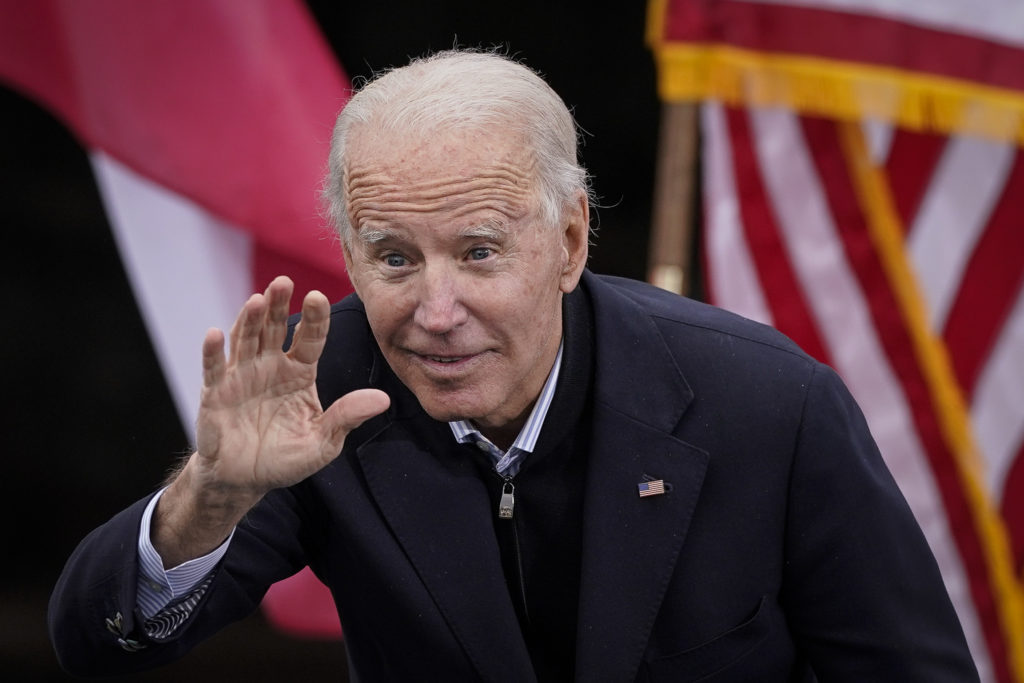 In Europe, Brexit negotiations ground on in the background to the pandemic.

A solution to the main sticking points in the negotiations between the EU and the British eluded the two sides for most of the year.

In general, coherent governance in Britain was in short supply.

He toughed out calls for his resignation, but by the autumn he was gone from No. 10.

It later emerged that during his time as a SPAD (special adviser) he’d managed to specially advise Boris Johnson to give him a pay rise of £40,000.

Towards the year’s end the Brexit deadline loomed, and the Covid-19 news — prior to the development of a vaccine — looked exceedingly bleak.

The British government appeared, at times, rudderless, indeed clueless, in the face of unprecedented challenges.

The situation in the UK was described as a cross between a horror movie and a Carry On film.

Ireland held a general election and installed a new Taoiseach, while in the North the Stormont executive finally reconvened.

But both jurisdictions had to deal with Covid-19 and Brexit — and the economic and social fallout from each of them.

Refugees continued to make perilous journeys across the Mediterranean to escape war-torn areas of the Middle East, particularly Syria.

It was a salutary reminder that there are places in the world riven by war as well as Covid-19.

It was, in short, a year of global dolorousness with only a few rays of good news to lighten proceedings. 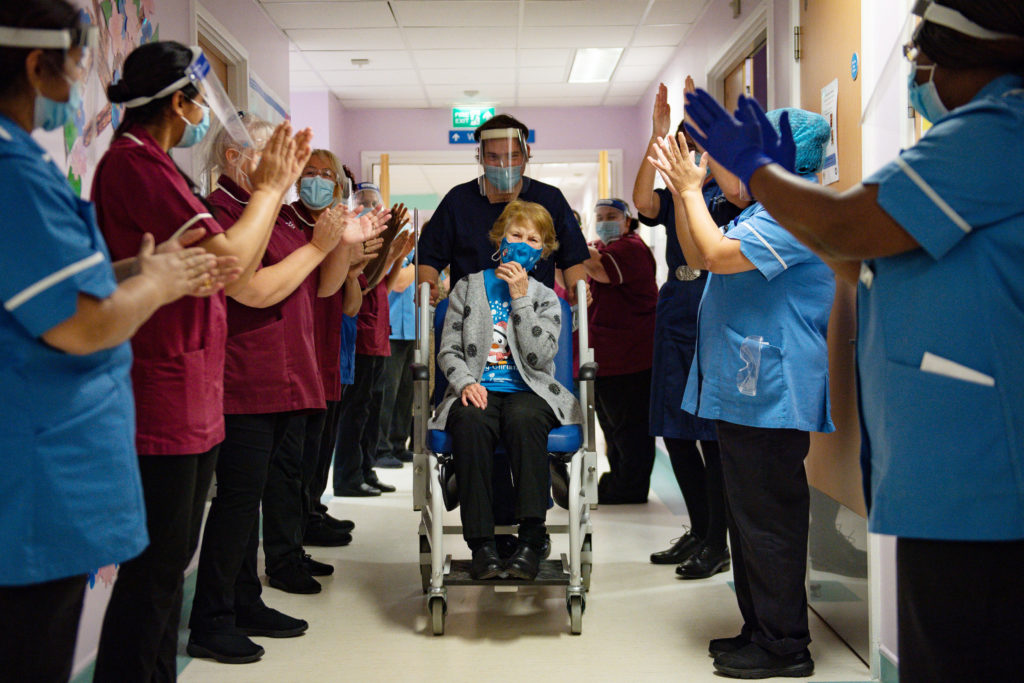 Margaret Keenan, 90, is applauded by staff as she returns to her ward after becoming the first person in the United Kingdom to receive the Pfizer/BioNtech covid-19 vaccine at University Hospital in Coventry

In January, few people in the West had heard of, or indeed were particularly interested in, a flu-type illness that seemed to be affecting parts of Asia.

But by the end of the month the World Health Organisation (WHO) had declared the outbreak of the disease a Public Health Emergency of International Concern.

As February wore on, the public in the West still didn’t take the threat seriously — worse than that, some governments didn’t either.

But by mid-February the World WHO had named the disease Covid-19 and by mid-March, most of the world realised this was a serious situation.

Lockdown began — a sort of open-ended season of house arrest — so the public in England headed for the shops to stock up on toilet paper and flour, and probably more alcohol than was good for them.

Throughout Europe everything was cancelled — celebrations to mark the 250th anniversary of the birth of Beethoven in Germany to strawberries and cream in Wimbledon were all gone.

The Rose of Tralee in Kerry, the National Ploughing Championships in Tullamore, the St Patrick’s Day parades in Dublin and London (and elsewhere) were all off.

In Ireland the tourism sector suffered hugely – a body blow, as in many parts of the country this is a major part of the economy.

This puts Ireland among the countries who have, arguably, handled the pandemic reasonably competently.

The UK’s figures are 1.72 million cases and over 62,000 deaths — which, adjusting for population, means that the UK’s death rate is double that of Ireland’s.

On the other hand, Norway, with a marginally bigger population than Ireland, saw only 38,000 cases and fewer than 400 Covid deaths in 2020.

It is conceivable Ireland could have upped its game in combatting the pandemic.

Being an island, it might have adopted the New Zealand or Taiwanese model — that is, by enforcing border quarantines.

This would have decreased significantly the rate of infection and is something many on the island would have welcomed.

But of course, Ireland falls under the governance of two jurisdictions, and cooperation by the Democratic Unionist Party (DUP) in this endeavour was doomed from the start.

They blindly followed whatever the Westminster government decreed, no matter how inept Boris Johnson’s administration appeared to be.

Possibly one of the oddest statistics to emerge from the crisis is that business for plastic surgeons is up.

This is mainly because people were appalled at how they looked on Zoom.

Now, thankfully a vaccination programme is underway across Britain and other countries around the world.

Coventry-based Margaret Keenan, who hails from Fermanagh, was the first person in the world to receive an approved Covid-19 inoculation when she received her jab at University Hospital Coventry earlier this month.

Ireland is set to roll out its own vaccination programme in January. 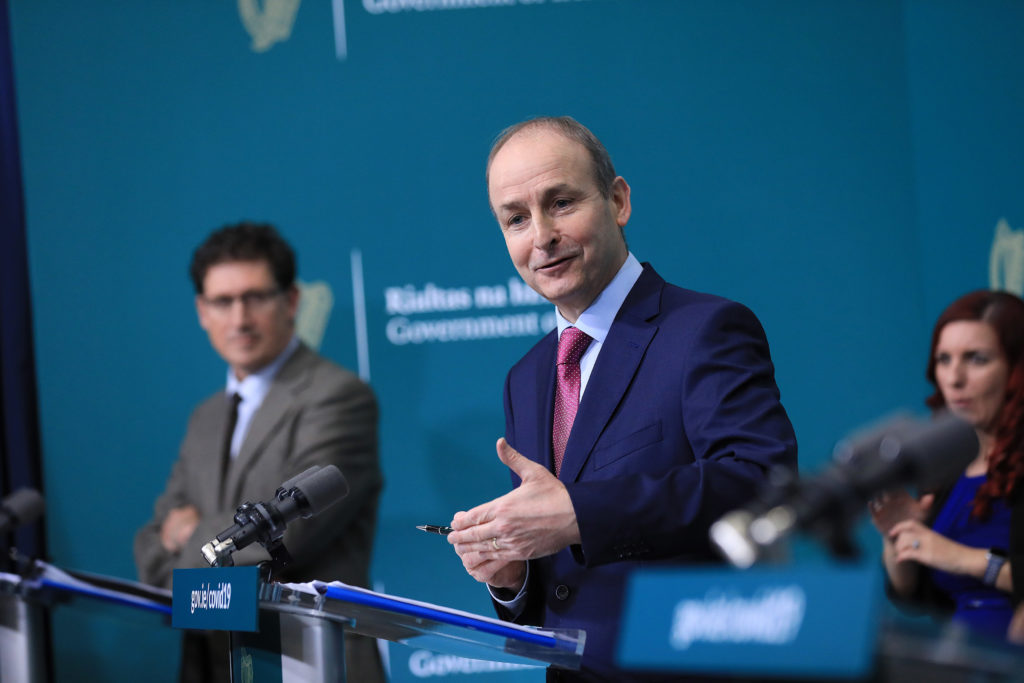 A general election was held in February.

The turnout of 62.9 per cent of the electorate returned a very close result — Fianna Fáil finished with 38 seats; Sinn Féin won 37 seats — and the highest number of first-preference votes — while Leo Varadkar’s Fine Gael came third with 35 seats.

Maybe it was the Fine Gael election slogan that consigned them to third place —although to be fair, back in February ‘A Future to Look Forward To’ didn’t seem particularly inappropriate.

Protracted talks between the parties took place. Despite representing a clear constituency in Ireland, no one seemed keen to open coalition talks with Sinn Féin, even though colleagues of Sinn Féin leader Mary Lou McDonald had dubbed her ‘The People’s Taoiseach’.

Instead, a coalition between Fianna Fáil, Fine Gael and the Green Party (the latter winning only 7.5 per cent of the seats) emerged.

It was agreed that Leo Varadkar would continue in the role of Taoiseach until June, when Micheál Martin would take over.

In February came the first mention of coronavirus in connection with Ireland — when two Irish citizens, on board a cruise ship in Japan, tested positive for Covid-19.

By the end of the month the virus had begun its steady march towards dominating every aspect of Irish life.

On March 1 a secondary school was forced to close for 14 days as a precautionary measure following the first case of coronavirus in the Republic.

Compliance with the restrictions amongst the public was high.

But then an Oireachtas golf society dinner in Clifden, Co. Galway in August was attended by 80-plus people, including high profile political and legal figures.

When details of the event were released, the public mood changed significantly. Resignations were required to quell public anger.

Barry Cowen had earlier been sacked as minister over revelations of a ban over a drink-driving charge.

Dara Calleary had taken his place, only to be forced to resign over ‘Golfgate’ as it was now being called.

EU Commissioner Hogan tried to tough it out, but in the end he went too.

When the full details of his movements were published, there was little doubt that he wouldn’t hold on to his EU post.

Apart from attending the Golfgate dinner, Phil Hogan had broken quarantine rules both nationally and internationally.

Just for good measure he was stopped by gardaí for using his mobile phone while driving.

The only high profile Golfgater to escape retribution was Justice Woulfe.

Despite being told by Chief Justice Frank Clarke that he should resign, Justice Woulfe was still in place at the end of the year.

Flouting Covid-19 government regulations or guidelines also claimed other jobs. The Chairman of Fáilte Ireland, Michael Cawley, stepped down after it emerged he had travelled to Italy on holiday, while the Chief Medical Officer of Scotland, Belfast-born Dr Catherine Calderwood, resigned over breaking lockdown regulations by visiting her second home.

Not all storms were political.

Widespread power cuts, downed trees and localised flooding across the country were regular occurrences throughout the year due to the severe weather sweeping in from that great weather machine, the Atlantic.

In matters of justice, on August 12, Aaron Brady was found guilty of the capital murder of Detective Garda Adrian Donohoe outside Lordship Credit Union in County Louth in 2013.

In November, Stephen Silver, 44, was charged with the capital murder of Detective Garda Colm Horkan, shot dead in Castlerea, Co. Roscommon on June 17, 2020.

In October gardaí began a murder-suicide investigation after a father and two sons died following a shooting incident at a farm outside Kanturk in Co. Cork.

Also in October, the High Court rejected a third attempt by French authorities to extradite Ian Bailey, 62, for the murder of Sophie Toscan du Plantier in 1996.

Bailey had been convicted in a French court of the murder of the French filmmaker.

In his absence — he had opted to stay in his home in west Cork — he was sentenced to jail for 25 years by the French justice department. 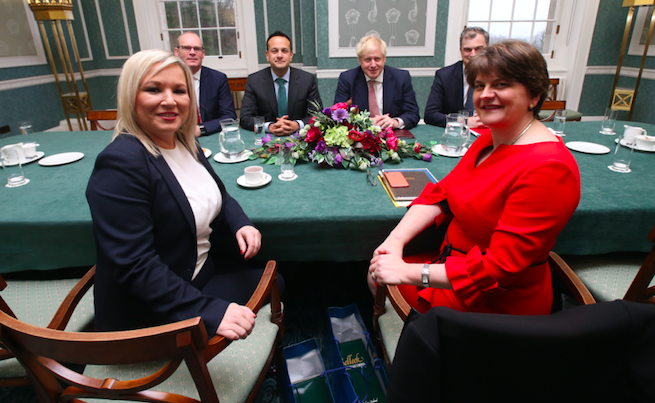 The Northern Ireland border was the chief focus of concerns in Brexit negotiations.

But squaring a circle that was acceptable to the DUP — anxious to see no dilution of the union with Britain — and the majority in the Six Counties who had voted to remain inside the EU, proved an elusive task.

As of January 31, 2021 there will be a large swathe of the population of Northern Ireland who, under the terms of the Good Friday Agreement, can opt to be Irish citizens. This will make them EU citizens, but also citizens (or subjects) of the UK.

The implications of this remain to be addressed, as does the overall trading position of the UK in the coming years.

The year 2020 saw the first same-sex marriage ceremony to be held in Northern Ireland.

It took place at a hotel in Carrickfergus, Co. Antrim.

Less than 40 years ago same-sex relations amongst men were illegal in Northern Ireland, punishable by long prison sentences.

But it was a remarkable turnaround in 38 years.