Over 3,000 Irish women and girls went to England for abortions last year

SOME 3,091 Irish women and girls travelled to England and Wales for abortions in 2017, according to new UK Department of Health figures.

The number means women and girls from the Republic of Ireland accounted for over six in 10 (64.3%) of non-resident abortions last year.

However, it represents a drop on 2016's figure of 3,265, which the HSE's Sexual Health and Crisis Pregnancy Programme says is down to increasing demand for abortion pills online.

The majority of women and girls who gave addresses in the Republic were from Dublin – at 1,184.

The statistics also show that 919 women and girls gave addresses in Northern Ireland last year - an increase of over 25% on the year before and the highest level since 2011.

This rise is likely due to the British Government's announcement in June 2017 that women from Northern Ireland would be granted free terminations in England. 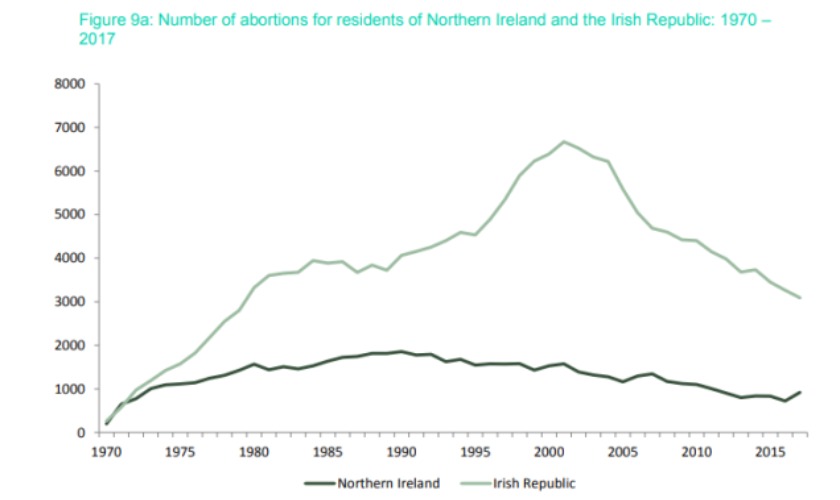 The release of the figures comes a fortnight after Irish citizens voted by 66.4% to 33.6% to remove the Eighth Amendment, which effectively banned abortion in the country.

Taoiseach Leo Varadkar told the Dáil last week that he expects new abortion legislation to be enacted in Ireland by January 2019.

He added that a first vote on the pending legislation should occur before the Dáil's break this summer.

The Irish Family Planning Association (IFPA) said the new figures give "important insights that should inform the type of abortion care we introduce to Ireland".

IFPA Chief Executive Niall Behan said: "The statistics show that the vast majority of UK residents who access terminations – 77% – have abortions at or under nine weeks' gestation. Only 0.2% of all women who have abortions require overnight care.

"Although the report cannot provide a definitive Irish abortion rate, as the figures don’t account for the growing trend of women accessing still-illegal abortion pills online, it shows us that women from Ireland tend to have abortions later due to the extra burdens of travel".

Mr Behan added: "The provision of legal care in Ireland will mean women in this country will no longer face unnecessary delays accessing services."

HSE SHCPP Programme Lead Helen Deely said: "If a woman is in any way concerned about her health following taking an abortion pill or travelling abroad for an abortion, we encourage her to attend a free post-abortion medical check-up funded by the HSE.

"These services are free of charge and the full list of services is available on www.abortionaftercare.ie".

The Society for the Protection of Unborn Children (SPUC) said the figures "show that the government is continuing its relentless policy to eliminate disabled babies".

Antonia Tully, Campaigns Director at SPUC, said: “The pressure on parents to abort disabled babies with a whole range of medical conditions is unremitting.

"Every year around 3,000 families who face the challenging news that their unborn baby has a disability of one kind or another undergo the unique tragedy of abortion, where their child’s life is quite deliberately taken.

“Families need care and support when they are expecting a disabled child, not the heartless ‘solution’ of an abortion. Tragically we abort so many of our disabled babies that there is less and less understanding of disability."