President Higgins has come under fire for his tribute to Fidel Castro. (Picture: RollingNews.ie)

PRESIDENT Michael D Higgins has come under fire for his tribute to former President of Cuba Fidel Castro, who he described as a leading international figure.

Fidel Castro was a Cuban politician and revolutionary who governed the Republic of Cuba for 47 years, first as Prime Minister from 1959 to 1976.

From 1976 to 2006 Castro continued to govern as the President of Cuba before stepping aside due to ill health.

He was First Secretary of the Central Committee of the Communist Party of Cuba until 2011.

President Higgins issued a statement on Saturday expressing his condolences on the death of former President and Prime Minister Fidel Castro who died late Friday night.

But speaking on The Week in Politics yesterday, the Irish Minister for Foreign Affairs Charlie Flanagan said President Higgins is entitled to his own opinion.

"Castro is an example of figure with a mixed legacy. I don't agree with much of what Castro did or said, I'm not a fan of his," he added.

"I come from a historically different tradition than Michael D Higgins. The President is entitled to make his views known on the passing of Fidel Castro."

While President Higgins has been criticised for his tribute to Fidel Castro, Sinn Féin leader Gerry Adams has confirmed he will travel to Cuba for the late leader's funeral.

“Fidel Castro was a global leader and a good friend of the Irish people," Mr Adams said following the news of Fidel Castro's death.

“I am proud and honoured to travel to Cuba to represent Sinn Féin, as we remember Fidel Castro.”

A spokesperson for the President said today that his statement clearly referred to the price paid for social and economic development in terms of civil society and the criticisms it brought.

"This obviously and unambiguously included the Human Rights organisations and activists who have always had the support of the President," he said.

"The President made a further reference to civil society later in his statement in the context of the opportunities provided by restoration of diplomatic relations with the United States, and the response which has come from the visit of Pope Francis. The President was here referring to the release of prisoners.

"Any suggestion that the President neglected Human Rights concerns is both unsustainable and unwarranted," he added.

"The President has discussed Human Rights concerns with representatives of the Government of Cuba on every occasion he has had meetings, in Cuba, Ireland and elsewhere.

"In all of his speeches on human rights the President has emphasised the universality of human rights and has never shirked from the presentation of that view."

"Following the revolution in 1959, Fidel Castro brought significant political and social change to his country, overcoming not just the regime of General Fulgencio Batista but also the economic isolation forced upon Cuba in the years that followed.

"Having survived some 600 attempts on his life, Fidel Castro, known to his peers in Cuba as ‘El Comandante’, became one of the longest serving Heads of State in the world, guiding the country through a remarkable process of social and political change, advocating a development path that was unique and determinedly independent.

"Cuba achieved 100% literacy many years ago and built up a health system that is one the most admired in the world. With economic growth rates similar to many other Latin American countries, inequality and poverty are much less pronounced in Cuba than in surrounding nations.

"His Governments faced not only issues of Development but also the consequences of an embargo imposed by Cuba’s largest neighbour, the United States, which was a regular topic for discussion at the United Nations and which was criticised by a large number of countries in the international community. 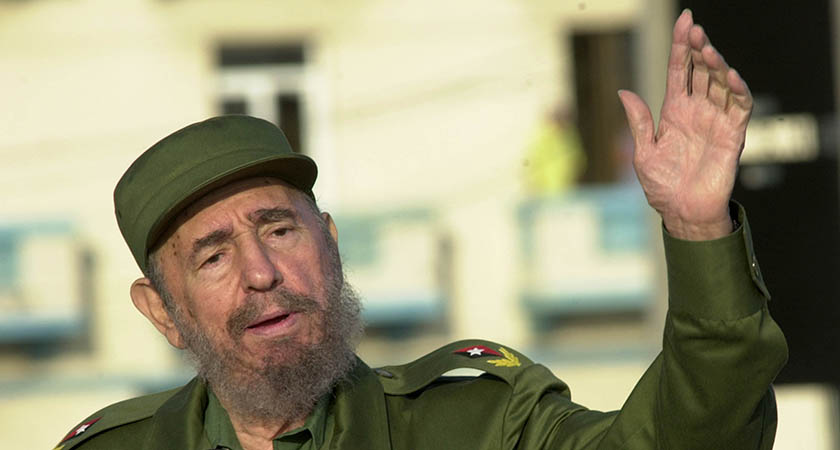 "The economic and social reforms introduced were at the price of a restriction of civil society, which brought its critics.

"Fidel Castro was of a generation of leaders that sought offer an alternative global economic and social order. He was President of the Non Aligned Movement and a leading figure in international gatherings that sought a more equal world of trade, rejected odious debt and sought an independent path to development.

"He advanced such ideas, for example, at such events as the Tri Continental Conference in 1966. And he would continue with this theme which informed his speech, for example, at the United Nations Conference on Environment and Development in Rio in 1992.

"He was speaking of how it was possible to eliminate global hunger and of the enormous burden that international debt was placing on impoverished nations.

"Expected to give a lengthy speech, his very short statement ended with the phrase: ‘Let us pay the debt to humanity, not the debt to the banks.’

"The restoration of diplomatic relations with the United States in 2014 and the visit of Pope Francis, and the response to it, have been ushering in a new period in Cuba’s history, one which seeks to retain the achievements of a social kind with greater freedoms in the civil society.

"Fidel Castro will be remembered as a giant among global leaders whose view was not only one of freedom for his people but for all of the oppressed and excluded peoples on the planet.”

Here's some of what people on Twitter have been saying about President Higgins' statement following Castro's death:

FG TD John Paul Phelan has told me on air that President Higgins' comments on "death of a dictator were bizarre & inappropriate". #castro

Castro was a tyrant.president Higgins shames the Irish people in praising him.disgraceful.

If Michael D Higgins thinks Castro's Cuba is such a wonderful place, maybe when he retires he will give up his state pensions and move there

President Michael D Higgins reruns the condolences for Hitler chapter of Irish history in his praise of Castro pic.twitter.com/c7ISnIVDGK

Irish man steps up training ahead of Cuba cycling challenge

Irish man's bid to cycle 350km across Cuba for charity