BABY joy once again for Dublin Zoo as they celebrate the birth of a scimitar-horned oryx, a species classified as extinct in the wild.

The zoo has also had two other causes to celebrate in the last six months as they welcomed both a baby elephant in September and a baby rhino in August.

Born on December 8, 2016, the newest addition to the scimitar-horned oryx herd brings its total to four. 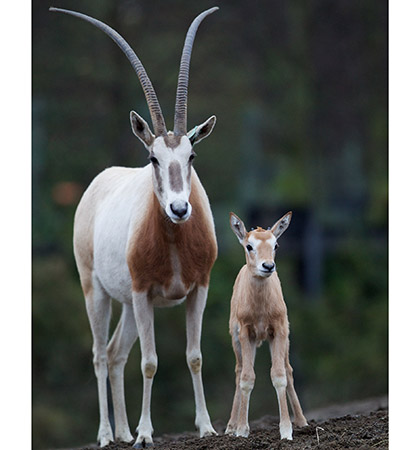 The scimitar-horned oryx was once widespread across northern Africa but due to overhunting, habitat loss and competition with domestic livestock, they have gradually disappeared from the wild.

The species have now been classified as extinct in the wild by the International Union for Conservation of Nature (IUCN), as there has been no definitive evidence of their presence in the wild for more than 15 years.

Since 2013, Dublin Zoo has financially supported the reintroduction programme for the scimitar-horned oryx in Tunisia.

Through conservation breeding programmes, zoo-bred oryx have been reintroduced into semi-wild areas in four national parks across Tunisia.

Currently there are over 200 oryx in such semi-wild areas.

Commenting on the birth, team leader Helen Clarke-Bennet, said: “We are absolutely thrilled with the new arrival and recognise the significance of this birth in the conservation of the scimitar-horned oryx.

"The calf has shown strong signs of settling into its new surroundings and is mixing extremely well with the rest of the herd.”