COMMONS Speaker John Bercow has thanked the people of Ireland for their contribution to life in Britain while warning that Brexit should not be allowed to stoke anti-Irish racism in this country.

Hosting a special event honouring Irish staff and members of parliament based in the House of Commons, he explained: “I hope you are all here because you want to join me in cherishing and celebrating and championing the cause of friendship with Ireland as a state and a real belief in, empathy with and love for the Irish in Britain.”

Organised by Chris Ruane, a Welsh MP with roots in Ireland who is Vice Chair of the All Party Parliamentary Group on Ireland and the Irish in Britain, the event took place in the State Rooms at the Speakers House in the House of Commons on October 8.

There Mr Bercow spoke out against the “exponential growth” of racial abuse in Britain which has developed alongside the ongoing Brexit saga.

“I think that this would be a point worth making at any time ,” he said, “but when I was asked today what I thought was one of the most unattractive features of political debate in recent years I said the single worst thing that has happened in recent years, specifically over the last three years, has been the exponential growth in racist abuse.”

He added: “I think that this is something I can say with support and understanding from members across the house and from across the Brexit divide that there are people with very committed principle views on Brexit, who are in favour of Brexit or against Brexit, who would not for one moment want the arguments to be descending into or disfigured by racist abuse.” 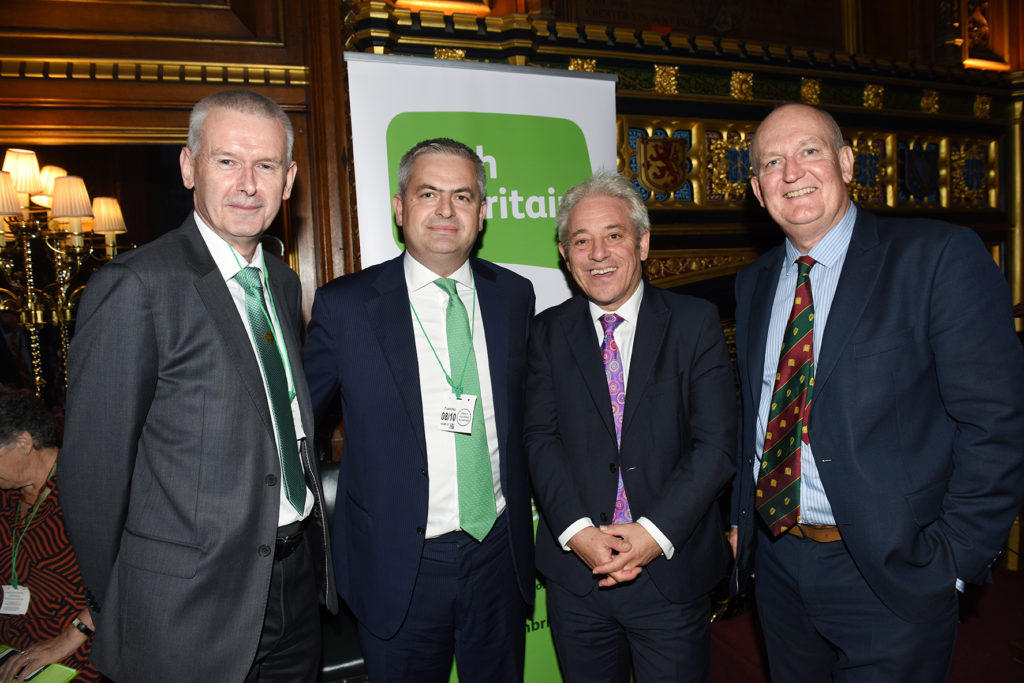 Regarding the plight of the Irish in Britain among that, he added: “I wasn’t around the in the 1950s but I have seen those television images, those appalling slogans in the windows of privately rented houses, saying ‘No Blacks, No Irish, No Dogs’ and I think across the political spectrum we have really thought and hoped that those days were gone, that they were part of a blinkered and bigoted past never to re-emerge.

“I still think that those opinions are in a tiny minority, dwarfed by the majority decency of the people of the UK,” he added, “and I’m not suggesting that we have reverted to an old and ugly type.

“The vast majority of people in Britain live very contentedly in our multi-racial society, but there is no doubt that some people have wrongly behaved as though a political decision about Brexit somehow gives them the green light to vent their racist spleen.

“Frankly colleagues, friends, it doesn’t and it is absolutely intolerable.” 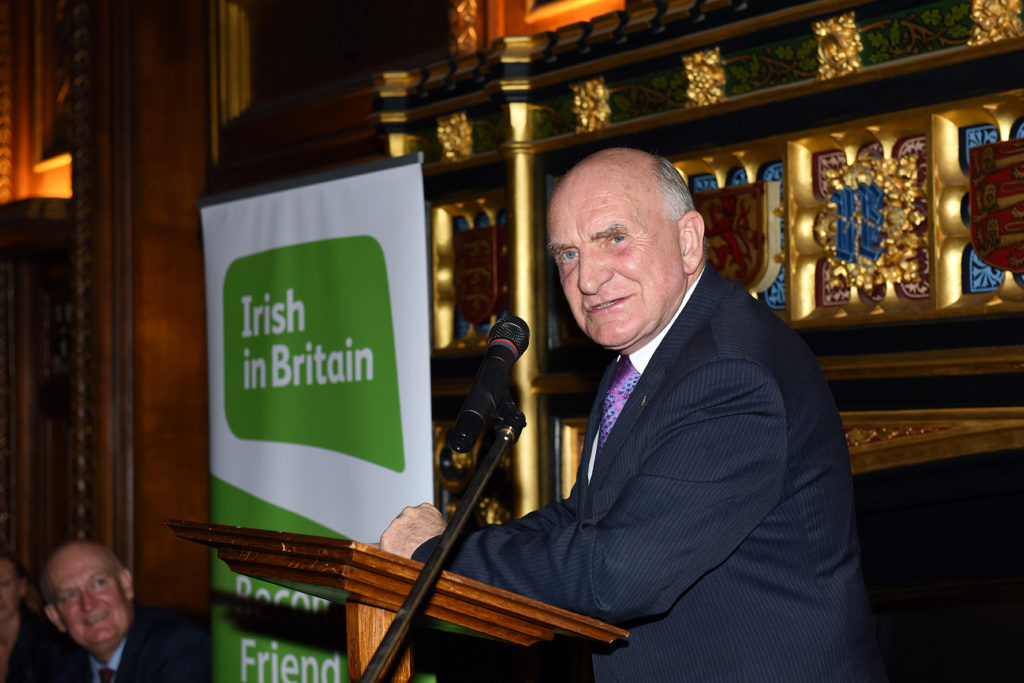 Such pro-Irish sentiment was echoed by Mr Bercow’s House of Commons colleagues at the event, entitled Irish in the House, which was also attended by a number of Irish community leaders and businesspeople.

Second generation Irishman Stephen Pound, the long-term MP for Ealing North, whose mother hailed from Mallow in Co. Cork, told the room: “Sometimes we need to stand back and say how much we owe to the people of Ireland, because in every  single parliament building - science, medicine, politics, you name it - the Irish are there and thank God they are because we are a far better place for them being here and what a tedious world it would be without them.”

Siobhain McDonagh, the Labour MP for Mitcham and Morden, used the opportunity to tell those gathered of her own story as a member of the Irish in Britain community.

Regarding her parents, who moved to Britain from Ireland in 1948, she said: “My mum and dad, they represent all of our families in this room – they worked hard, they loved this city, they didn’t regard those awful postcards ‘No blacks, No Irish No dogs’, they told you how much better this city became instead, they bought their home against the odds, they raised two daughters who went to university, they built their church by collecting money form the doors on a Sunday, they brought us up determined to work hard, to stand by your family, to give to your community.”

She added: “I tell you their story simply because it’s your story – it’s the story of the Irish in Britain, in our city, a community so proud, that we can be proud of, that have given so much. 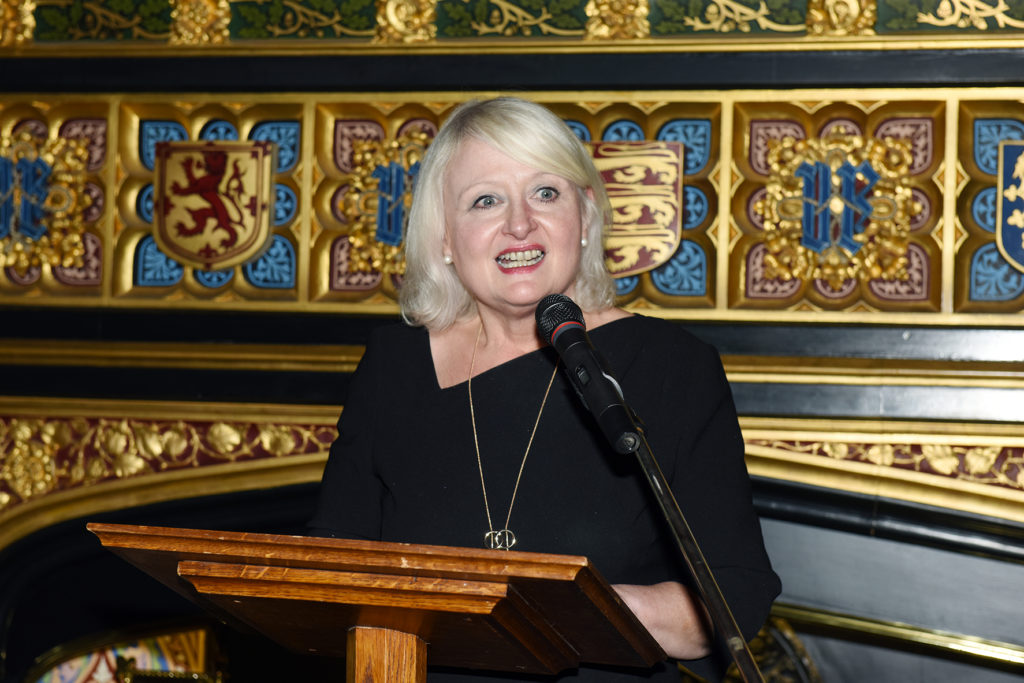 Siobhain McDonagh MP speaking at 'Irish in the House' event

There were Irish connections to be found in all corners of the House of Commons venue on the night, however the Speaker, who recently announced his intention to resign from that post at the next general election, was forced to lament the fact that he had no Irish heritage of his own.

“I wish as a politician before a pro-Irish audience, and with representatives of Ireland here, that I could conjure up, fashion or pull out of the bag some known Irish connections of mine,” he said.

“It would be extremely politically convenient, but I honestly don’t think I can – I am not aware of any Irish connections, but what I do know is this, when I go to Ireland I love going to Ireland.”

He explained: “I love listening to Irish folk music and enjoying Irish beer and revelling in Irish humour and these things are very special.”

Luckily Irish Ambassador to Britain Adrian O’Neill was also in attendance on the night and reassured the Speaker of his unique Irish position.

“The first time I heard you speak was in 2014 when you welcomed President Higgins on his state visit to the UK,” the Ambassador told Mr Bercow.

“You gave a really very gracious speech on that occasion, so although your genealogical research hasn’t been able to find any Irish lineage, I think I can well and truly pronounce you Irish by affinity,” he added.

Despite his lack of confirmed Irish heritage, Mr Bercow displayed a genuine understanding of the Irish community in Britain over the course of the event.

“What I do know is that the Irish community in Britain is treasured and honoured by most decent people in Britain,” he explained.

“If you go to parts of the UK where there is a large Irish community that community is welcomed and celebrated and absolutely part of the warp and weft of life in that area and long should that remain so.

“Here in parliament the contribution of Irish people is very real right across the piece,” he said.

“In all departments of the House we have Irish staff, people with strong Irish connections in their family who are part of what makes this the rich, diverse, welcoming, culturally enriching place that it can be.

“I hope that I speak for colleagues across the divide when I say that none of us would want the present source of political discord and tension to be judged to be an excuse for people to indulge some sort of anti-Irish sentiment.

Calling for “no diminution” to that currently positive relationship, he said: “Where there is difference let there be peaceful resolution and where there has long been a cherished relationship between the government of the UK and the government of Ireland, and an admiration for the contribution to civilised life of Irish people everywhere, let that attitude of celebration and respect and equality of esteem, for people of the UK for Ireland and for people of Ireland for the UK, [continue].

"You couldn’t be more welcome here,” he added.