The late Munster head coach passed away in October from heart disease at the age of just 42.

Munster lost their final game under Foley 35-14 to Leinster, but have since paid homage to their legendary back-row and head coach by winning seven from seven.

Foley’s passing seemed to revitalise not only Munster but the entire rugby nation, with the boys in green spurred on by his passing to confront New Zealand’s haka in Chicago last month and beat them for the first time ever.

Leicester Tigers proved no match for them last weekend when they went down to the Red Army 38-0 at Thomond Park, and the province’s form shows no signs of slowing down.

Speaking to The Irish Post, Foley’s former international teammate and friend Brian O’Driscoll said Munster’s form was the “ultimate tribute” to him.

“It’s a horrific situation for the players and Anthony’s family, and Munster’s boys have gone about honouring him in the best possible way,” he said.

“Munster’s form is the ultimate tribute to him.”

Munster weren’t the only province to have a good weekend against an English side, after Leinster romped Northampton Saints 10-37 on their own turf at Franklin’s Gardens.

Leinster remain contenders in both the Champions Cup and Pro12, and O’Driscoll says the Blues should realistically aim for winning just the one.

“At this moment in time to win one, with the precedence obviously being with European silverware, should be on Leinster’s radar,” the BT Sport rugby pundit said.

“I don’t exactly rate the chances of a double brilliantly right now half way through the season, but one victory would probably suffice for Leinster right now.

“To do a double is very, very hard. It’s something that Leinster have never managed. I’ve been in Heineken Cup and Pro12 finals in subsequent weeks and lost both of them,” he added.

“It’s not an easy thing to do to get yourself up on successive weeks in successive finals, especially for the second game with your body still not quite right.” 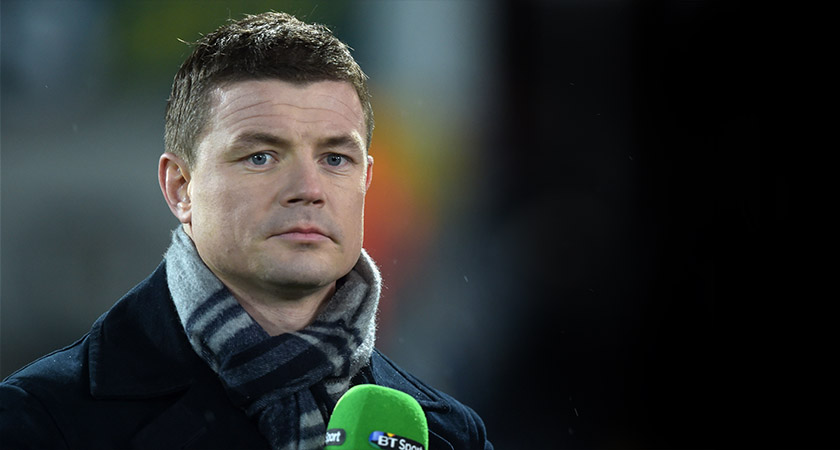 O'Driscoll has been a pundit with BT Sport since 2014. Photo: Chalres McQuillan/Getty

Leinster had a chance at a domestic and European double previously in both 2011 and 2012, but failed on both occasions to pull off the historic feat.

“But the second one, where we lost by one point to Ospreys on our own patch, that was our big chance and it felt appalling. It was so disappointing because I can’t tell you how much we badly, badly wanted it that year.”

O’Driscoll branded Hartley’s indiscretion as “mindless” on Twitter after the game, and questioned the England captain’s suitability as Lions skipper for the upcoming 2017 tour of New Zealand.

It was yet another example of the Leinster man not pulling any punches as a pundit with BT Sport since his retirement in 2014.

“Being a pundit is not a seamless transition out of playing the game, it’s particularly difficult commentating on old teammates but the more experience you get the more comfortable you are saying certain things,” O’Driscoll says.

“I didn’t really know exactly what I was going to do when I retired. As much as I’d put some things in place I realised there’s nothing I knew more about than rugby.

“I’ve been playing the game my whole adult life and so I know the game pretty well, even though it continues to evolve. So it made sense to continue having an involvement.

O’Driscoll’s former international teammate Ronan O’Gara has been coaching in France with Racing Metro since his own retirement in 2013, but O’Driscoll says he isn’t tempted to follow in the Munster man’s footsteps.

“The thing about coaching is that it limits me to specifically being a coach. I’d be putting in close to double the hours the players are putting in and so there isn’t really a whole lot of time to be having other interests.

“But thankfully I have loads of other things on the go that keep me travelling and keeps me being my own boss.

“Working in rugby punditry really ties in with being able to do other things in life.”

Tune in for round 4 of the European Rugby Champions Cup with Leicester v Munster, Saturday December 17 at 3.15pm, followed by Leinster v Northampton Saints at 7.45pm and Sale v Saracens on Sunday December 18 at 5.30pm, exclusively live on BT Sport 2.