ANOTHER 7am start as we regrouped at the Concern office and headed off to see one of the health and nutrition programmes that Concern support at Alinaf Community Hospital.

After 15 minutes travelling we turned off the main road onto a dirt track and spent the rest of the day travelling off road between the villages.

The conditions were even more treacherous than yesterday with the jeep nearly cutting out a few times trying to get out of the massive ditches and potholes.

Today was hotter again than yesterday and as the jeep bounced over the craters in the road, a swirl of dust rose up around us, stopping us from keeping the windows open for air.

We arrived at Alinaf Community Hospital, which is a series of red brick huts that are connected by covered walkways.

The sun was beating down now as women breastfeeding infants of all different ages were perched on steps and pavements around the buildings.

We met the hospital administration team and were then brought around to witness exactly what happens in the hospital on a daily basis.This particular programmes treats children and pregnant mothers who are moderately or severely malnourished.

We were brought into the room where the initial weighing and screening of the children was taking place. On the stone floor sat approximately 20 mothers, who were breastfeeding babies that looked extremely thin and malnourished. I was instantly struck by the young ages of most of the mothers themselves. They looked barely older than children and here they were sitting in torn and soiled clothes, solemn looks on their faces and with a child feeding off their chest.

After their progress has been assessed, the children are fed with Ready To Use Therapeutic Food (RUTF), more commonly known as plumpeanut.

The mothers are then given a ration to take away until they return to the clinic the following week.

It was heartbreaking to see the small children so unwell, but even more so was to see these young mothers looking so tired and hopeless. I felt really powerless as there was so little I could do. 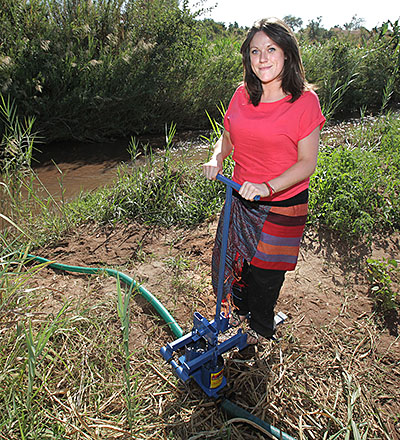 We got the chance to chat with some of the mothers and hear their stories. I was speaking to a woman called Fides. I asked her what age she was herself and I couldn’t hold back my shock when the translator told me that she didn’t know.

For someone not to know how old they are just seemed incomprehensible to me. It brought tears to my eyes as I looked down at the poor baby in her arms and just wondered what future the little thing could ever have coming from a situation that is already so hopeless.  It makes you want to give them anything you have and feels very unfair that so many children are born into lives with so many opportunities when so many are not.

If Concern wasn’t supporting this hospital, they wouldn’t be able to provide this service and it’s safe to say there is a good chance that Fides and her daughter would be going hungry and would not be getting the help they need to stay alive.

Heading on from there, we visited a fuel-efficient stove making group in Mbiya Village.

This community told us they were so remote that they never see cars or people. You can imagine the looks of awe and bewilderment, especially in the children’s eyes, when a group of white people arrived in with cameras, recorders and notepads.

We arrived to them coming out of the village to greet us singing and dancing and children circling the car. It was another beautiful welcome that I am starting to get used to and will miss very much when I return home.

As part of the Food, Income and Markets programme, Concern trained one woman in the village on how to make the stoves and cook them in the kiln.

She has in turn mobilised her community and taught many of them how to make the stoves themselves. They are now able to sell them, which provides income for food when the harvest supplies run out, stopping their families from going hungry.

James had a chance to mould one of the stoves from pottery and we both got to carry a stove on our heads to place it in the kiln to be baked. 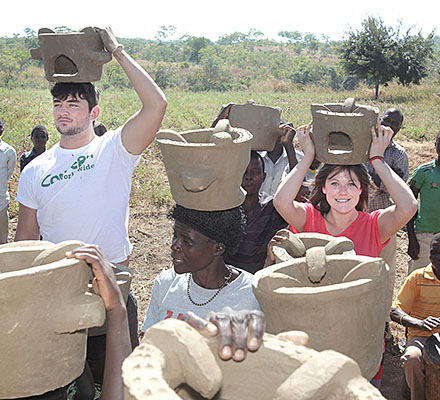 They were so heavy and I couldn’t understand how some of the tiny children beside me were running around with them balanced on their heads without even holding them. The children of the village did a traditional dance as we were leaving and the dust rose as they danced around in circles, their brightly coloured clothes creating a sea of colour.

We went on to Masewe Village to see the Kalawe farming group who have received 2 treadle pumps from Concern to irrigate their land.

As soon as we arrived, it was obvious to see how lush and irrigated the land was and the positive effect the irrigation has had on their crops.

They showed us how the pump pulls water from the river. It is operated like a stepper machine that you would see in a gym.

James, Eimear and I all got to have a go at stepping on and pumping, which got a lot of laughs from the local villagers. I had brought over colourful stickers, crayons and colouring books and James and I handed out the stickers to the children. They were completely amazed and had never seen anything like it. It was so rewarding to see the genuine smiles on their faces. It reminds you of what is important when all a child needs is a small sticker to make their day.

We headed back to Lilongwe this evening and I felt really emotional to be leaving Nkhotakhota.

I have fallen in love with Malawi, and this district in particular. The people were so warm and welcoming, despite the extreme poverty.

We are heading for dinner with the Concern staff in the office here this evening. Our last full day has been another emotionally trying yet very rewarding one. I am looking forward to our last few activities tomorrow morning before we head to fly back to London in the late afternoon.