Britain’s great old Irish cities will stand long after we're gone, that's how we win - just by carrying on

Balloons forming the number 22 are pictured alongside flowers and messages of support in St Ann's Square in Manchester, northwest England on May 25, 2017, placed in tribute to the victims of the May 22 terror attack at the Manchester Arena. Police said they arrested two men Thursday in the Manchester area in connection with the deadly bombing of an Ariana Grande pop concert, while a detained woman was released without charges. Britain has raised its terror alert to the maximum level and ordered troops to protect strategic sites after 22 people were killed in a suicide bomb attack on a Manchester pop concert. / AFP PHOTO / Oli SCARFF (Photo credit should read OLI SCARFF/AFP/Getty Images)

IN THE summer of 1996, the IRA bombed the centre of Manchester and I was living on an inner city road in Old Trafford. I remember well the shock that swept the city.

The IRA had phoned in a warning and, somehow, nobody was killed, but the damage to the city centre was to eventually cost billions.

It is worth noting, too, that England was hosting the European Football Championships at the time and there was a match to be played in Manchester the next day.

The IRA, like ISIS, was quite happy to attack ‘our way of life’.

I remember discussing it all with friends in a pub in Chorlton in the following days and arguing that we needed to understand the IRA as well as condemn them. In all honesty, I’m not so sure the same can be said about ISIS.

One of the most chilling things the IRA ever said was after the Brighton bombing when they warned that they only had to be lucky once, but the authorities had to be lucky all the time.

By comparison, ISIS might best be characterised by one of their warnings that whilst we love life, they love death.

We may just have seen evidence of that in the bombing of the Manchester Arena. It was an act of evil, wasn’t it? To bomb children and young people at a pop concert. An act of evil.

Sadly, Ireland knows all about these things for just up the road from Manchester, in Warrington in 1993, IRA bombs killed three-year-old Jonathan Ball and 12-year-old Tim Parry.

The bombs had been left in iron rubbish bins, therefore sending large amounts of shrapnel flying through the air. This was done in the name of Irish republicanism.

The ISIS bombing may have been carried out in the name of sheer hate, but there are enough comparisons, enough shrapnel, flying around to cause even the most benignly sympathetic to the cause of republicanism some discomfort.

Negotiations with the IRA were ultimately able to bring around peace. I’m not sure, by contrast, how you negotiate with those whose stated aim is to destroy your way of life.

ISIS appear to be a terrorist organisation whose aim is simply death and destruction. It would be liking negotiating with the Nazis. It would seem to make as much sense as blaming the Irish community in Manchester for the IRA. 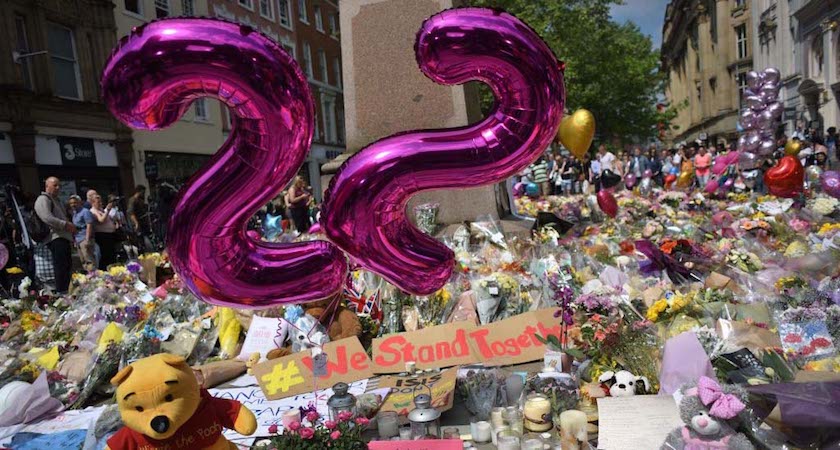 Or the Muslim community in Manchester for ISIS. Some things just don’t make sense.

We do have to try and make sense of it, though, and we have to do better than the so-called leader of the free world, Donald Trump, calling the killers, with a shuddering paucity of vocabulary and thought, ‘losers’.

What that is, I just don’t know.

I wonder, though, did Ireland’s dissident republicans, who still believe they can kill their way to a united and glorious Ireland, watch the same horrendous rolling news footage that we all watched?

I wonder if they thought the dead child would be appreciative of the difference?

I think those questions are worth asking, because Ireland has a very direct experience of terrorism and how terrorism flourishes.

It was possible, after all, to agree with much of the Republican analysis of The North and the murderous effects of British imperialism without agreeing for one moment with their murderous response.

It was possible to understand the IRA without condoning them.

It is possible, too, to understand the alienation of some Muslims and the injustices of western involvement in Muslim countries without condoning for one second the fascistic death cult of the suicide bomber and his ISIS masters.

What those awful events in one of Britain’s great Irish cities serves to remind us is that we must always be ready to examine our own relationship with those who think killing people is an means to a end, and never forget that there are people on this island right now who think a gun and a bomb might bring about an Ireland united and free.

Britain’s great old Irish cities, whether it be Manchester, Birmingham, London, Liverpool or Glasgow, might be reeling today.

They might be in mourning, but they’ll be still standing long after we are all gone.

Sometimes, that’s how we win. Just by carrying on.

Calls for a return to hemp farming to save rural Ireland