A PROFESSOR of black studies who accused the British Empire of doing more damage than the Nazis described whiteness as "a psychosis" during an appearance on ITV's Good Morning Britain on Monday.

Dr Kehinde Andrews was speaking to hosts Piers Morgan and Susanna Reid to discuss the renaming of the MBE and OBE.

He appeared alongside Jonzi D, a dancer and spoken word artist, who recently turned down an MBE for its historical connection to the British Empire its history of slavery. 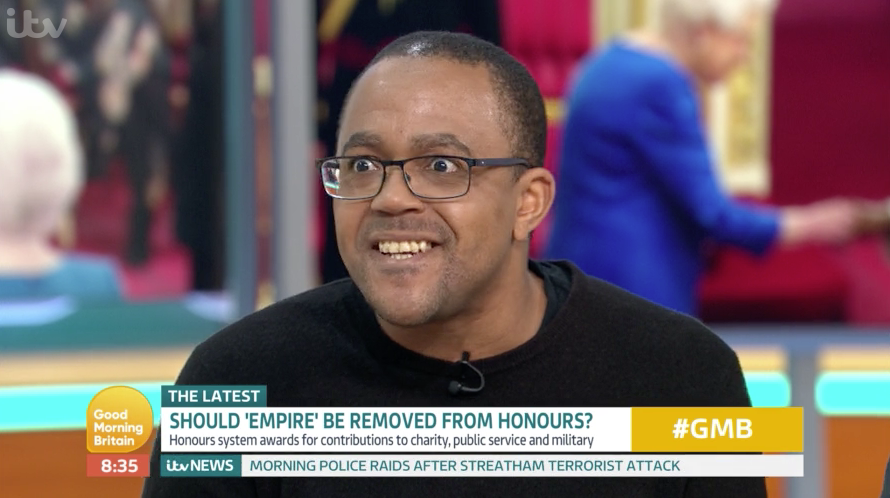 Both men were challenged by the panel who asked them to consider that the British Empire "wasn't all bad".

Andrews resounded by saying: "The way we remember this history is so bad, that we actually think we can find comfort in this system which killed tens of millions, probably hundreds of millions of people, rape, murder, torture, famine.

"Whiteness is a psychosis - you can’t have a reasonable explanation."

Following the claim, he was accused of racism by Piers and Susanna, but Andrews defended his view.

"Whiteness is not just for white people," he said. "There are black people, Asian people, who also purport the psychosis of whiteness.

"It's about the idea. It's about the fact that in the 21st century, 60% of British people believe that empire was a force for good. That’s like saying the Nazis built motorways, so we should celebrate them. It's literally an irrational view."

The professor later took to Twitter to double-down on his earlier claim.

"The British empire lasted far longer, did more damage and in many ways paved the way the Nazi's and their genocidal ideology. We do no favours to the victims of the Holocaust by pretending otherwise. If we forget the past we are likely to repeat it," he tweeted.

The British empire lasted far longer, did more damage and in many ways paved the way the Nazi's and their genocidal ideology. We do no favours to the victims of the Holocaust by pretending otherwise. If we forget the past we are likely to repeat ithttps://t.co/QWphGiYWyc

Mr Andrews has a history of of criticising Britain's past on the show.

In 2018, he claimed to a stunned Piers Morgan that Winston Churchill shouldn't be celebrated because he was a racist and responsible for the starvation of thousands of Indian people during the second World War.

Last year he appeared on the show after a war memorial - commemorating the pilots who fought against the Luftwaffe - was vandalised. He argued that their bombing of German cities - and the subsequent deaths of German civilians - was a "war crime" that the country shouldn't be memorialising.

This will be Ireland's last lockdown, Dr Ronan Glynn insists