Rose Plays Julie: The Dark Psychological Film Thriller We All Need To Talk About

It centres on Rose (Ann Skelly) a young student in search of her biological mother (Orla Brady). Though she has a loving relationship with her adoptive parents, Rose is eager to discover more about where she came from.

Her search appears to hit a dead-end, however, when she learns her mother has no wish to see her. Undeterred, and unflinchingly determined to gets answers, Rose journeys from Dublin to London to confront her.

While there, she learns the harrowing truth behind her existence and encounters the man who fathered her (Aidan Gillen) in violent and morally reprehensible circumstances.

Ahead of the film’s festival screening, the Irish Post spoke to filmmakers Christine Molloy and Joe Lawlor about what went in to the making of the film the alarmingly timeless issues at its heart.

Joe: “We’re hoping people will connect with the film and enjoy it. It’s not a light piece of work but we’re hoping viewers will be given a lot to think about.

Christine: “This is the first opportunity we have had this year to present the film to an audience in the UK and Ireland so that’s really great. If it wasn’t for the pandemic, we would have released our film last year. So, it’s been on a very different journey from the one it would have been on. It’s a real honour to present films to an audience again and we’re thankful to the festival for allowing us to participate.”

How did you first begin working together as a team?

Joe: “That would bring us back to Dublin in 1983.  Our journey began doing community theatre and art and setting up a lot of initiatives in the city. The unemployment rate in Ireland was very high so the prospect of getting jobs weren’t great.

“You had to use your wits, so we used our contacts in the community to develop our own initiatives. After doing that for a number of years with organisations like the Dublin Youth Theatre, we both came over to the UK to study for four years at an art college in Devon.

“It’s been a meandering journey that started off with community activism then moved into theatre and then about 20 years ago film. But it’s always been storytelling and dealing with narratives and characters and worlds whether it was theatre or film. Film just does that better because a camera can create that fiction in a way theatre can’t.

“We were always drawn to cinema. But in the 1980s you couldn’t imagine making a film. I didn’t know anyone with a camera. Video cameras were just beginning to come out but were still quite inaccessible.”

What inspired you to make Rose Plays Julie?

Christine: “We felt strongly about the subject matter. We wanted to make a film that focused on the impact of acts of sexual violence perpetrated on one person by another and how that trauma and grief and fallout lasts through time and generations. Rape is a trope that is used in cinema, in a number of ways, almost to the point where we are numb to it. We really wanted audiences to think about the impact.

“But we were also interested in the character of Rose and the idea of a young person who has questions about who she is, her identity, where she came from. That’s something that is in a lot of our work; characters who have questions about who they are. Maybe that comes back to us leaving Dublin all those years ago in the 1980s and starting our life here. Things that feel quite fixed and certain like your accent or the way you use language begins to change because you are in a new place. That focus on identity under duress is always interesting to us in all the work we have made. 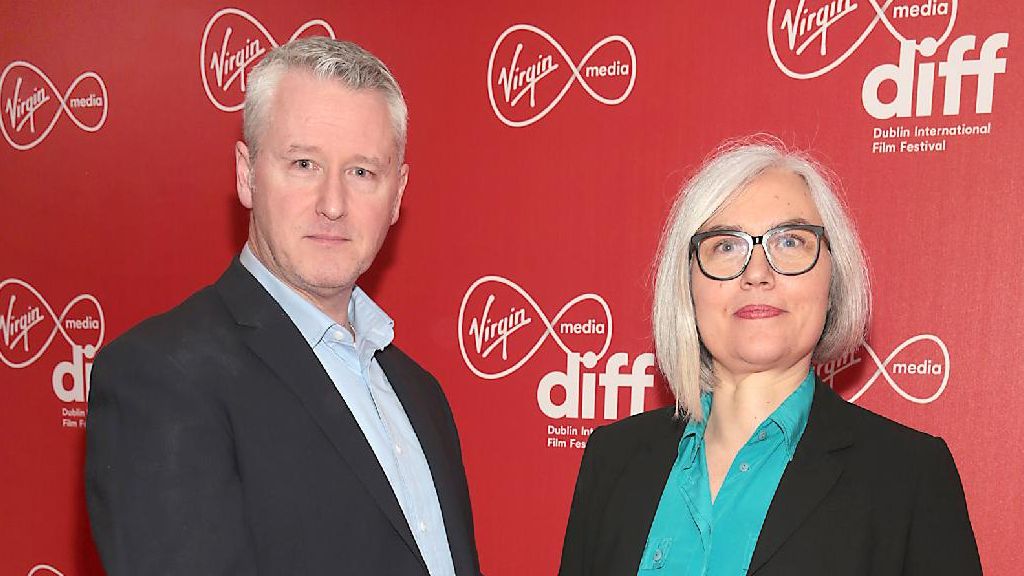 Rose Plays Julie confronts the reality of sexual violence against women. Do you think this is something society needs to address more?

Joe: “The short answer is yes. Over breakfast we were discussing with our daughter what happened to Sarah Everard. You have the police advising women not to go out alone and there being an obvious backlash to this with many saying ‘well, why aren’t you tell men not to leave their homes?’

“It feels the wrong way round.  Going out or leaving a place of an evening isn’t something where you should have to plan for a worst-case scenario. That debate is as relevant today as it was when we were making the film a few years ago and even a thousand years earlier. It’s an issue that finds different ways of being expressed. There's a tension and misogyny that we have in society.

“When you are thinking about what kind of film you want to make, you need to make sure you are committing yourself to a subject matter you feel strongly about. Something that needs to be articulated. That was one of the driving forces behind the film.

“This was perceived as years before MeToo, but MeToo as an idea was latent long before that. It doesn’t go away; it just announces itself in different iterations sadly.”

Christine: “It’s the whole idea of justice and how we deal with rape in society. We deal with it really badly in lots of different ways. Victims are badly served by the justice system. In fact, conviction rates are actually down again. You hear horror stories of women being subjected to terrible things in trials. For example, that recent case in Cork last year where a woman’s underwear was paraded around in court by a female solicitor as proof she was more or less looking for rape.

“It doesn’t go away. We don’t know how to deal with it. With our film we wanted to explore that perception of justice. When it’s a generational case and there is a rape conceived child at the heart of it, how do you go about dealing with it?

“There two recent cases in the UK where a woman wanted to bring her father to face trial because she was raped conceived. It’s such a thorny issue, because who is the victim and so much time has passed.

“We have failed to find a way of dealing with it and nine times out of 10 when it is one person’s word against another’s the jury will protect the offender from going to prison rather than supporting the victim. We can’t seem to get away from that. It’s almost like rape is something you can do.

“We have an 18-year-old daughter and it’s incredibly difficult not to demonise men because you find yourself being so angry so much of the time. And even with something like the Sarah Everard case, it’s rare, very rare, for a woman to be randomly be abducted on a street in a city like London. But it does happen and when it happens it reinforces all the other stories you hear. Women, men, children are sexually abused in their homes or on the streets and it doesn’t go away.” 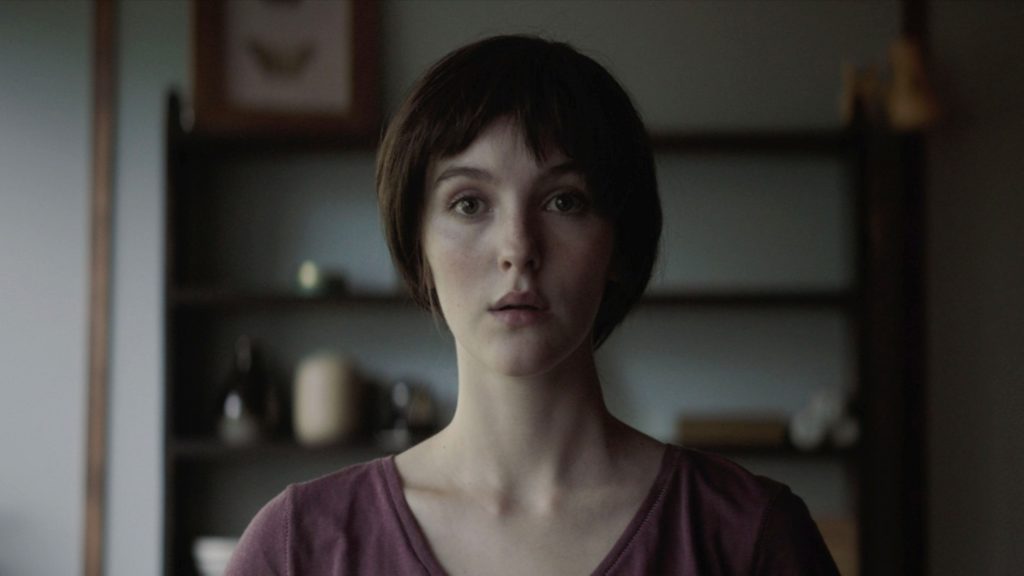 Orla Brady and Aidan Gillen are well known but Ann Kelly is a relative newcomer – how did you come across her and what did she bring to this role?

Joe: “She’s brilliant. It was after meeting Ann and hearing how she talked about the character [that she was cast]. It’s a role that requires difficult balancing act between somebody who is very pleasant and approachable and friendly but also incredibly resolute and determined and borderline dangerous. Ann just somehow had that quality about her that she was very hard to read at first. The character is very tough and unrelenting. She handled that delicacy so well.”

Christine: “We like characters where a lot goes on inside their head. We needed to work with someone who audiences would find compelling as they are trying to process things and Ann has this captivating presence. She’s a real star-in-the-making and we were really lucky to work with her. She’s in a new big project at the moment and once that is out there, I think she will be wider known. 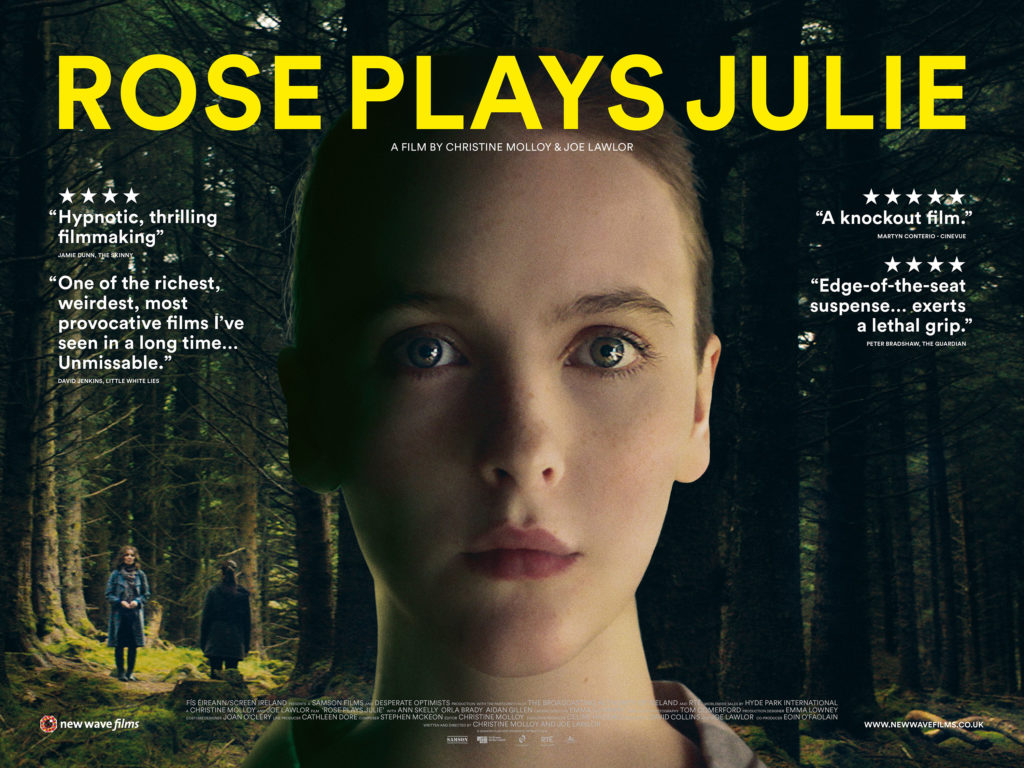 What do you hope audiences take away from Rose Plays Julie?

Joe: “That watching films is an important and enjoyable experience, first and foremost. I say that because I always get worried people are going to watch films less and less.

“It’s also to think about the content of Rose Plays Julie and how that was expressed. If it can generate conversations, that would be a useful thing for us. Rather than pass you by – what Alfred Hitchcock might call a fridge movie. We want this to resonate.”

Christine: “It’s been hard for film to find a space given the rise of streaming and with cinemas closed for the past year. I would love for people can give themselves over to the experience and get something back from the effort they have made to engage with film. Something that might make them think. It’s what we always hope for with our work. That they have engaged with the language and art form of cinema. It’s such a rich form and we hope audiences feel the same.”