A CIRCUS TAMER has been killed by four tigers during a training exercise in Italy.

The 61-year-old man was attacked and mauled to death by the tigers who were part of his circus act in Triggiano, a small town near Bari (at the heel of Italy’s ‘boot’) on Thursday.

One of the tigers allegedly began to attack the trainer before three others joined in.

Reports suggest that the big cats played with his body for a while in their cage before paramedics and circus staff could eventually intervene.

The tamer, Ettore Weber, was taken to hospital immediately but later died due to his injuries.

The incident has sparked fresh calls for a ban on the use of animals in circuses.

Although just four tigers were involved in the death of Weber, all eight of the circus's tigers have been removed by the police. 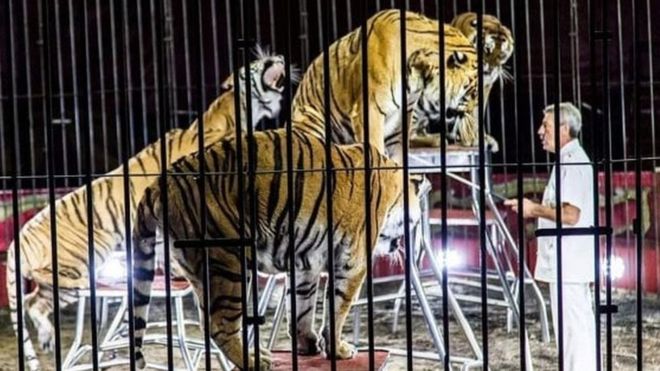 Various animal welfare groups have since come forward, urging for the tigers involved not to be killed, but instead, taken to a more suitable, natural environment.

Mr Weber, who worked for Orfei Circuses, is said to be one of Italy’s best known circus tamers.

The Anti-Vivisection League have now urged the government to speed up the process of banning circus animals.

“Tigers must be saved … and placed in an environment suitable for their natural needs,” they said in a statement.

A bill to ban animals in circuses was proposed in 2017, but was defeated. Now, Italian parliament will discuss a new bill in the wake of this recent horrific episode.

Initial reports from the area suggest that the tigers have, for now, been moved to a safari park.