Community unite in grief after missing Celtic and Ireland fan Sean McKenna, 24, is found dead in a loch

THERE were emotional scenes on the streets of Coatbridge last night as hundreds of people paid their respects to tragic Sean McKenna.

A search for the missing 24-year-old had been underway over two weeks ago, but ended with the heart-breaking discovery of the young man's body in a local loch last Thursday, October 27.

Sean went missing after leaving his friend’s house in the town’s Derwent Drive at around 3am on Monday, October 10.

Police are not treating his death as suspicious.

Speaking to The Irish Post, Sean’s father James said that the McKenna family - who have Irish roots in Belfast - were pulling through their ordeal thanks to the support the community.

“The vigil was tremendous. There were over 1,000 people there. It has given us a big lift,” he said.

“Sean was a popular lad. Big smiles all the time. A big, happy and loveable guy. Loved his football and loved life. He was the life of the party just like any lad his age.

“He was a big Celtic fan and always had a wee inkling for Ireland. When Scotland played Ireland in the football last year he supported Ireland, and I said ‘you’re Scottish!’

Yesterday's vigil in Coatbridge, which is home to a big Irish community, saw hundreds congregate and light candles in tribute to Sean, before walking the streets and holding a minute's silence in his memory.

After the march, an online fundraising campaign was set up for Sean’s family and has already achieved over £3,000 of its £4,000 target.

You can donate here.

Preparations are now underway for Sean McKenna's funeral, which will be held in Coatbridge.

Mr McKenna said he hopes that as many people will turn out as possible to pay tribute to his son. 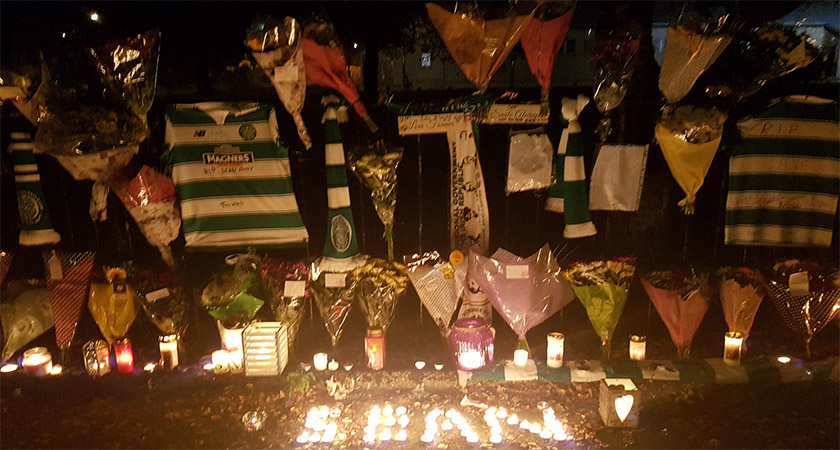 Sunday's vigil to Sean McKenna in Coatbridge, Lanarkshire [Picture: James McKenna]
After Sean's disappearance on October, a wide-reaching police operation and social media campaign were launched to find him.

Community members from across the region joined police in searches around the Coatbridge area.

All the while, the McKenna family held out hope that Sean could be found.

But on October 27, their worst fears were realised when police confirmed that a body found in Coatbridge’s Woodend Loch was Sean’s.

In a statement, Police Scotland said that Sean McKenna’s body was recovered from Wooden Loch at around 4.30 on the afternoon of Thursday, October 27.

Area Commander for Coatsbridge, Chief Inspector Gavin Russell, said: “I would like to thank the public and the media for all their assistance in sharing our appeals to trace Sean McKenna.

“His disappearance has had a massive impact within the local community, who have really pulled together since he was first reported missing.