TWO bogus workmen who attempted to con a vulnerable elderly war veteran in a bogus repairs scam have been jailed.

The pair also attempted to con other elderly victims by falsely claiming urgent repair works were required on their properties.

Sweeney received four years and three months; and Murphy four years, plus an additional year sentence for breaching his suspended sentence regarding an unrelated matter.

The pair were originally found guilty on November 13 following a trial at the same court.

Between July 20 2016 and September 29 2016, they visited six elderly victims in their homes and advised them that repairs for leaks to roofing, drainage and plumbing needed to be completed on their homes.

The victims would typically be asked by the suspects to provide a landline number, and once they left the property one of them would call claiming to be 'the boss' who would give details of how the victims should pay for the work on the property.

Luckily on most occasions, no money was handed over as victims realised it was a scam before it was too late.

However, in one case, an elderly man paid £2,500 to the pair after being told he needed urgent building works to his Ealing home.

On 25 July, both defendants attended the victim’s address. Sweeney introduced himself as a builder, claiming that work next door had caused damage to the victim’s property and that they would need to hire large machinery in order to carry out the repairs.

The property next door was actually having building work done so the victim was convinced by the claim.

He was told they needed £2,500 as soon as possible to get the work completed, so went immediately to the bank to withdraw the cash.

He handed it over and the defendants left saying they would go and get the machinery and return soon. The victim soon realised this was a scam and called police. 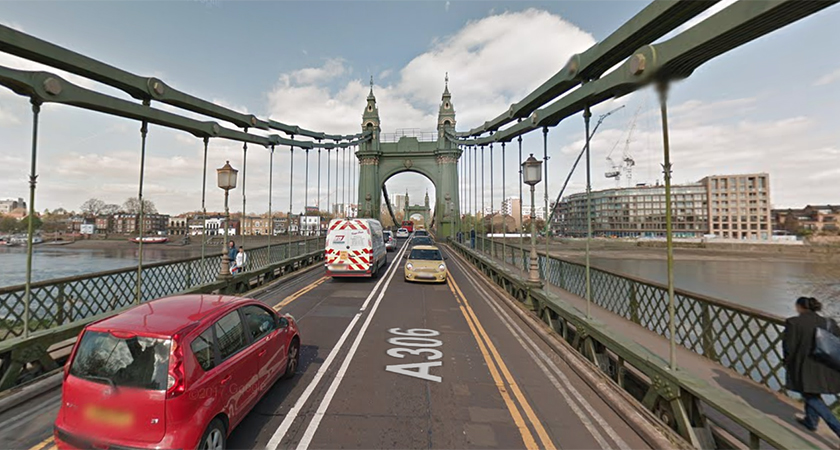 One of the victims was targeted as he walked over Hammersmith Bridge. (Picture: Maps)

On September 29 2016, Sweeney travelled to Barnes where he approached 95-year-old Victor Elphick as he walked across Hammersmith Bridge.

He said to the victim that he was aware of damage to his house and asked him to confirm his address.

The victim handed over the details and a while later Sweeney and another male turned up at his front door.

Sweeney headed straight to the kitchen where – out of sight of Mr Elphick – he threw a saucepan of liquid everywhere, claiming it to be water damage from a leak. Sweeney said he would make some calls and send someone to the property later that day to assess the damage. When he called the victim a few hours later, his step-daughter had arrived home and realised it was a scam. Sweeney never returned.

An investigation was launched by officers from Westminster Crime Squad and the pair were arrested after being identified via mobile phone and CCTV inquiries.

Training Detective Constable Ross Burrell of the Westminster Community Safety Unit said: “The actions of these men were deplorable – deliberately targeting some of the most vulnerable in our society with no regard for the stress and anxiety it would cause.

“I hope that the victims can take some comfort from the fact they have been apprehended and will now serve a prison sentence.”

Mr Elphick passed away earlier this year. His step-daughter, actress Susan Blake, said: “Victor was a rear gunner on a plane dropping leaflets over France in WWII, and the only survivor when the plane crash-landed on the south coast having been shot at.

"He became a successful actor, especially in the early days of TV, and helped design the BBC TV Centre, having studied architecture.

“After the incident, Victor became listless and lost his appetite. He feared going out alone, especially over Hammersmith Bridge where the conmen had accosted him, and convinced him his home had been flooded.

“They followed him home and whilst one went through to the garden, the other threw Victor’s soup, diluted with water all over the ceiling and walls to look like a leak.

"I don't want to scare vulnerable people, but this 'con' needs to be widely publicised, so that elderly vulnerable people don't talk to strangers and never open the front door if they are alone.”

Tips for protecting yourself from bogus tradesman fraud include: