THE Conservative Party and the Democratic Unionist Party have signed a £1 billion 'confidence and supply' deal to support the Prime Minister's minority Government.

After two weeks of discussions, the DUP Leader Arlene Foster arrived at Downing Street shortly after 10.30am this morning, and the deal between the two parties was announced soon after.

The confidence and supply agreement was signed by Tory chief whip Gavin Williamson and the DUP's Jeffrey Donaldson at Number 10.

A confidence and supply agreement is where a party or independent members of parliament will support the Government in motions of confidence and appropriation or supply votes, by either voting in favour or abstaining.

The deal will allow the Prime Minister to pass legislation with the support of the Democratic Unionist Party in parliament, and stay in power as Britain negotiates its exit from the European Union. 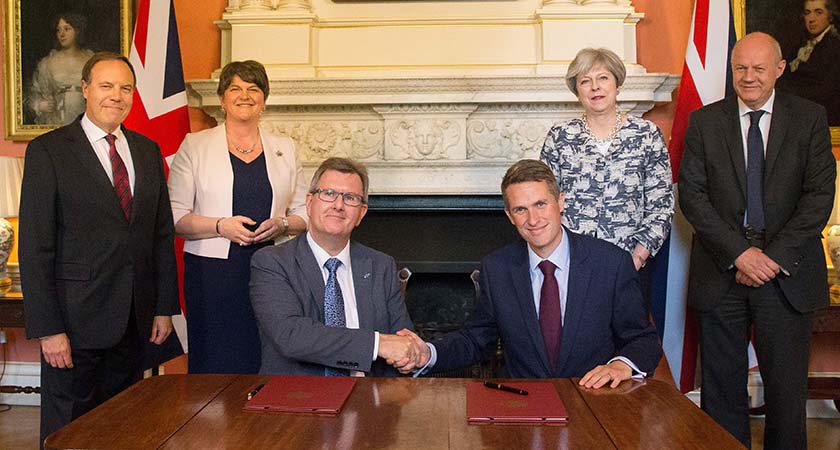 In a statement read to the press, the former First Minister of Northern Ireland Ms Foster said: "Today we have reached an agreement with the Conservative Party on support for Government in parliament.

"This agreement will operate to deliver a stable Government in the United Kingdom's national interest at this vital time.

"Throughout these discussions our guiding principle has been our commitment to acting in the national interest in accordance with our shared objectives in enhancing and strengthening our precious union." 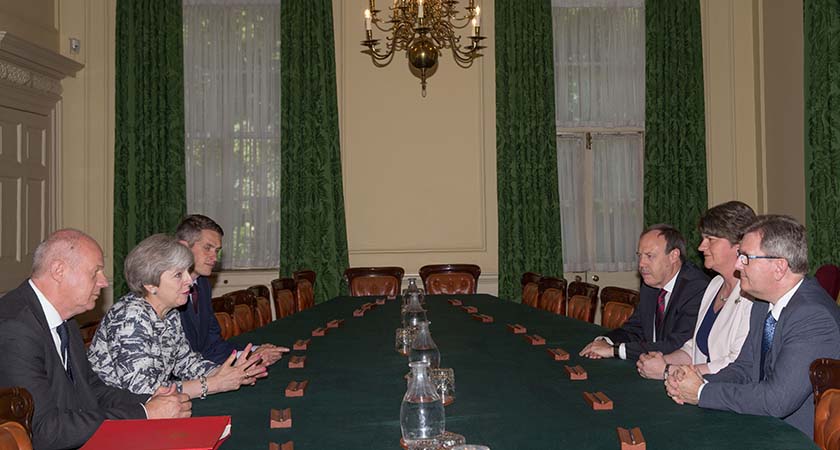 Ms Foster, who was flanked by the Rt Hon Nigel Dodds and Chief Whip Jefferey Donaldson, also said that the agreement was based on "enhancing the security of our nation, building prosperity for all and supporting an exit from the European Union that benefits all parts of the United Kingdom."

During discussions, the Conservative Party also recognised the need for higher funding in Northern Ireland given the 'unique history and circumstances over recent decades.'

Ms Foster said: "Our aim in these negotiations has been to deliver for all the people of Northern Ireland and the support measures we'll be announcing will be for the benefit of all our people.

"They will boost the economy and invest in new infrastructure, as well as investing in our health and education sectors and a range of other measures.

"We welcome the financial support of £1 billion in the next two years, as well as providing new flexibilities and almost £500million previously committed to Northern Ireland.

"As a consequence, spending power of almost £1.5billion will be available to address the unique circumstances of Northern Ireland and the effect these have had on the economy and its people."

In the agreement signed this morning, both parties agreed the DUPs would have no involvement in the British Government's role in political talks in Northern Ireland.

The announcement of the agreement between the Conservatives and DUPs comes just days ahead of the deadline for the Northern Irish parties to form an Executive this Thursday, June 26.