Petition against ‘blasphemous’ comic starring Jesus Christ gets over 100,000 signatures

A NEW superhero comic featuring Jesus Christ as a main character has been branded “'outrageous and blasphemous” in an online petition calling on DC Comics to halt its publication.

Second Coming has been written by Mark Russell, an Eisner Award-nominated author and cartoonist who has worked on several different titles for DC.

Its website invites readers to "witness the return of Jesus Christ” after he is sent on a "holy mission by God to learn what it takes to be the true messiah of mankind".

In order to do so, he is forced to become the roommate of a superhero called “Sun-Man” – a character who is evidently a spoof of Superman. There’s a twist though.

According to the synopsis, “when Christ returns to Earth, he’s shocked to discover what has become of his gospel—and now, he aims to set the record straight."

"God was so upset with Jesus’s performance the first time he came to Earth, since he was arrested so soon and crucified shortly after, that he has kept him locked-up since then,” Russell explained to Bleeding Cool.

"God then sees this superhero on Earth a few thousand years later and says 'that’s what I wanted for you!'

"He sends Jesus down to learn from this superhero and they end up learning from each other." 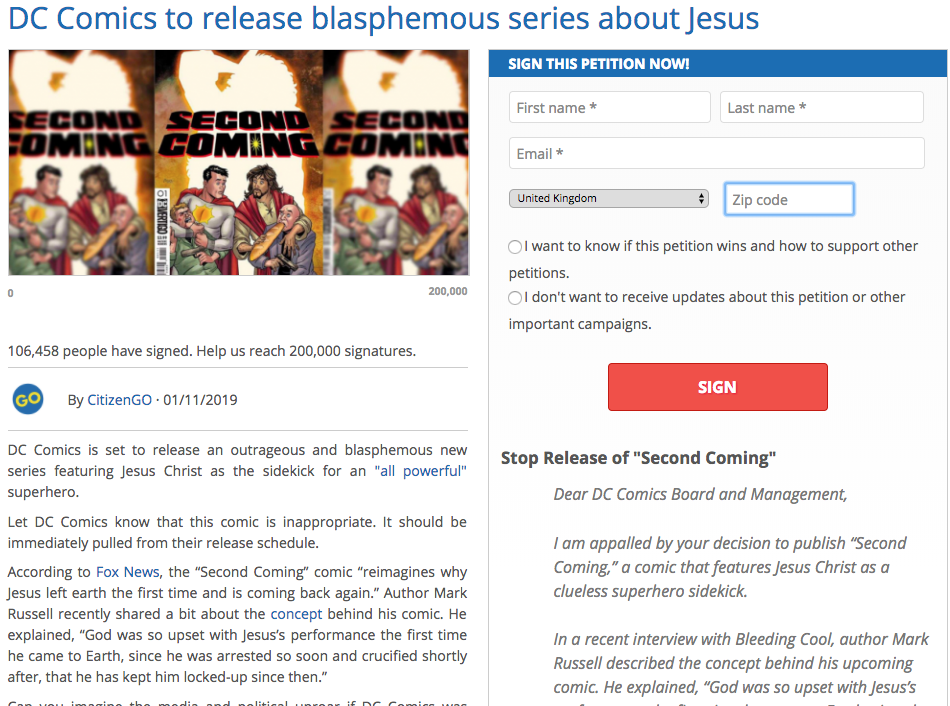 DC Comics has commissioned the new title for an initial six-issue run but it’s already been met with opposition online.

A petition launched on Citizen Go has branded Second Coming “inappropriate” and is calling on DC to cancel its release.

“Would DC Comics publish similar content about other religious leaders, such as Mohammed or Buddha?” the petition asks.

“This content is inappropriate and blasphemous. It should be immediately pulled from your publishing schedule.”

The petition has already amassed over 106,000 signatures and has set itself a target of reaching 200,000.

DC Comics has so far failed to respond to the campaign.