PEOPLE get pissed off when London-based journalists write a load of stuff about London. I know how they feel.

I grew up in Cork and read a lot about Dublin in the national newspapers and Dublin might as well have been Dunedin for all I knew or cared about it. The implication behind all of this coverage was that life in Dublin was fuller and more vital and than life elsewhere. From a young age I suspected that was b******s.

I imagine the Post readers from outside London have a similar antipathy towards the city by the Thames. And they’re right too. The idea that there is so much to do and see every day in London compared to other places is flawed. There is a little part of this city that, every weekend, proves that there isn’t all that much going on here; if people keep flocking to this spot then there can’t be a surplus of other options. That place is Borough Market.

If you haven’t been, Borough Market is a food market near London Bridge station. If you want to pay 16 quid for a lump of cheese or £11.50 for an organic bison-rib hotdog in pear and cinnamon chutney between a steamed, gluten-free bun then you're in the right place.

And there are a lot of people in this place on a Saturday or Sunday.

In the warren of narrow allies between the stalls, about 78,000 swollen young professionals that usually nudge and elbow each other out of the way in pursuit of career advancement do the same in pursuit of grub. At least in work they don’t have to pretend to be enjoying it all of the time.

I was there once with the better half. We were new in town and it was recommended in one of the guide books. I never returned and I never opened that book again.

Lots of places get referred to as being Dante’s Seventh Circle of Hell. I think that’s over the top. This isn’t hell, just a particularly unappealing neighbourhood of purgatory. 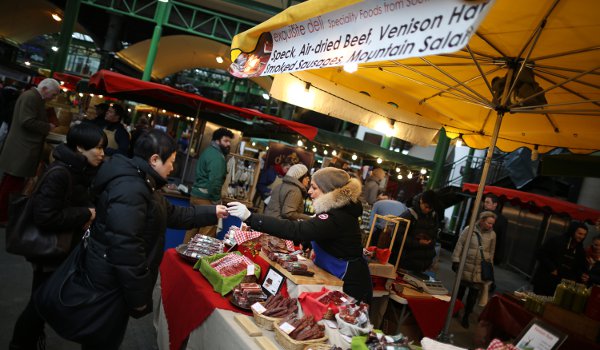 Anyone for an organic bioson-rib hot-dog?

One where you are destined to wander a frustrating path, around and around, while hundreds heave against you and block your road. In this purgatory you’re starving and all you want is a munch but you have to stay hungry because no matter how much you want to eat something, anything, a voice in your head – the non-London part – says, “a tenner for an ostrich and halloumi pepper burger … are you on drugs!?”

So round and round you go, your hunger and insanity rising with every slowly-completed lap.

Perhaps I’m being unfair to old Borough Market. Clearly a lot of people like it. For me it just the right mix of ingredients to make my blood pressure climb. In this stew pot we have pretentious metro-dwelling yuppies, rip-off prices, over-crowding, over-hyping and the key flavour that gives this dish its signature – the foodie.

I want to marinate them in a chopped-squid sauce and then shallow fry them in a bed of live condor eels. The fact that any adult would call themselves a foodie is crime enough. The word sounds infantile and sappy. But there’s another dimension to this – that being that they are some kind of connoisseur.

In truth all they are doing is going from artisan market stall to pop up restaurant to their own gadget-laden kitchen AND STUFFING THEIR FACES.

Look, if you want to shove crap down your gullet, if you’re addicted to sugar and salt and carbohydrate and fat and protein and sweet and sour and everything in between then fair enough. I have no cote de boeuf with you. But if you’re going to try and pass it off as some kind of hobby, well, that’s where the problem begins.

We all like the stuff we shouldn’t. I’ve chowed down my share of rich, calorific junk. But I don’t see this as a good thing. It’s not. This stuff is bad for you – much as drinking loads of lager or smoking Johnny Blue is bad for you too. But you wouldn’t see a couple of lads down the pub talk to each other like this. 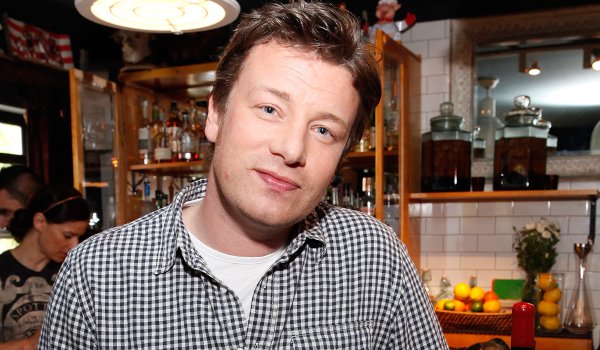 Jamie Oliver: if his food is so healthy then shouldn't he be slimmer?

“Oh yeah? Me too, although sometimes I wonder if I’m more of a smokie person? I smoke every day, 40 cigs, never less than that.”

“Wow, you must really know your fags.”

“Yeah, been smoking since I was 11. Tried all the brands before settling on Rothmans.”

That would be a ridiculous conversation. To me, all of this foodie culture and TV chef stuff is just as mad. I see them all on the telly lumping in butter and salt and sugar and giving it a good old shake and bake and “there you go darling, have a nibble on that”.

Maybe people think if your double-chocolate cupcakes are made in a beautifully appointed kitchen with flattering lighting then it’s fine. You can take your vice and turn it into your passion!

The same people walk past McDonalds and scoff. At least the folk in McDonalds know that they’re not doing a great thing by wolfing down a large chicken sandwich meal followed by a strawberry sundae.

But you have your Jamie Oliver characters on the telly educating us to the dangers of processed fast food and then selling books about how we should be making our own stuff instead. His natural ingredients are no doubt more healthy than the E numbers and trans fats – but they can’t be that healthy.

Every time I see that mockney geezer chef on telly I’m thinking the same thing: “Jamie, if all this stuff is so good, then why are you so fat? If the camera adds 10 pounds then you must have four cameras pointed at you.

"You need to take that serving spoon out of the old north and south. You need to get out of the kitchen, buy a bike or a pair of runners. You need to cut down on your porklife, mate, GET SOME EXERCISE.”

This foodie nonsense ain’t just a London thing – it has spread, a layer of flab around the belly of popular culture that needs a serious work out.