Armed police officers arrive at The Shard in the London Bridge quarter in London on June 4, 2017, following a terror attack. Forty-eight people have been taken to hospital after a terror attack in central London in which six people died, the London Ambulance Service said Sunday. / AFP PHOTO / NIKLAS HALLE'N (Photo credit should read NIKLAS HALLE'N/AFP/Getty Images)

IRISH witnesses who were caught up in the London Bridge terror attack have told of their horror as Saturday night’s events unfolded around them.

Seven people were killed and 48 wounded after three men drove a rented van through crowds on London Bridge before attacking people with knives at Borough Market.

The three attackers were shot dead by armed police outside the Wheatsheaf Pub just eight minutes after the first emergency calls were made. 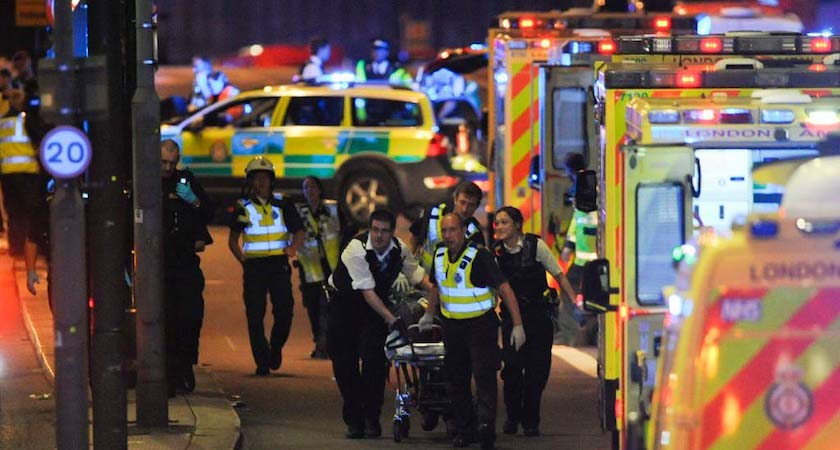 Police officers and members of the emergency services attend to a person injured after a terror attack on London Bridge on June 3, 2017. (Picture: DANIEL SORABJI/AFP/Getty Images)

One Irish couple where caught up in the event having just left a restaurant opposite Borough Market when one of the attackers sprinted past them into a nearby pub.

They told RTE’s News Week: “We had just got up from our table and were walking down the street when we saw the bouncers and one of the security guards from the restaurant next door run into the market.

“They ran back out in pursuit of quite a large guy who ran into the pub next to the restaurant we had been eating in.

“We looked back at where we had been sitting and a group of people were running towards us from inside the pub where the guy who was being chased had run.

“They knocked over the table we had been sitting at and we ran with the group around the corner and down the street. Everyone was quite shaken.

“I heard somebody talk about how somebody had tried to stab him or he had been stabbed, I can’t remember very well what he said.”

They said they didn’t see what the man did once he entered the pub, but that “everything seemed to escalate” from that point on.

“At that point there were no police. The only ones advising people to go one way or another were the security guards outside restaurants and pubs.

“There was just a lot of very confused tourists, a lot of people who clearly didn’t know what was going on or hadn’t heard yet.”

They said that in the confusion, people didn’t know which way to run to get away from the terrorists, who were stabbing people with knives.

“It was actually the people running who were warning others not to go back in the direction we were going.” 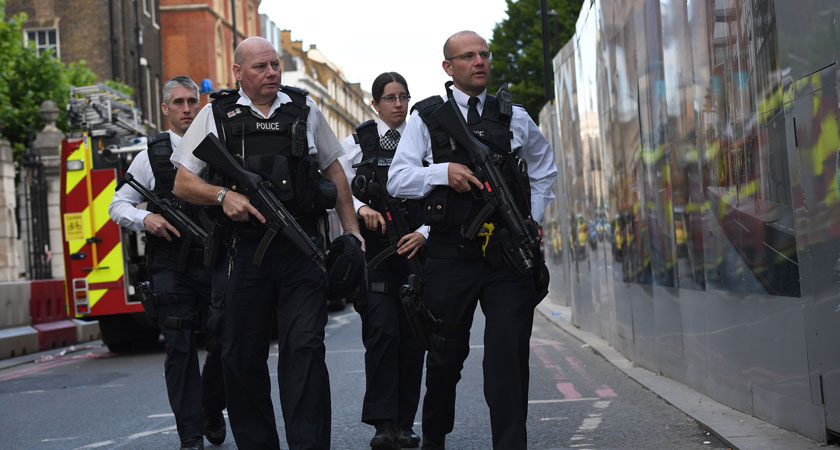 Speaking on the same programme, Irish-born journalist Redmond Shannon, who was in the London Bridge area just after the attackers were shot, said police were “screaming” at bystanders to evacuate.

He said: “One witness she told me she saw CPR being performed on someone. A second person injured on the ground on the bridge, a passing driver drove her off the bridge to get her away from the scene.

“Another young man was out with his friends for the night – he was so traumatised he couldn’t really tell me what he saw, other than he saw a knife.

“He said it was the most scared he had ever been. You could see in his eyes that he had seen something terrible but he just wouldn’t and couldn’t go into detail about what it was.”

An Irish mother called Pamela was on the London Underground with her 12-year-old son when the attack began shortly before 10pm.

"We were actually in the underground when it happened and we were due to get off at London Bridge and the tube did not stop,” she told BBC Radio 5.

"We got off to change at the next stop. We were at Bank and they just shouted evacuate, evacuate, and we had to run up the stairs - that was probably the most frightening thing."

Pamela explained that when she arrived at her hotel in Southwark, police forced her and her son to evacuate the building.

The Belfast mum added: "The Crowne Plaza Hotel put us up on the floor, about 100 people, and we just slept on the floor with towels around us so we have had no sleep, we are exhausted but at least we are safe.”

This article was ammended on June 6 at 1.35pm relating to names published.