A HISTORIC building that was previously a home for the Irish community in Liverpool could be transformed into a business and innovation hub for students.

The Wellington Rooms in the city’s central Mount Pleasant area housed the Liverpool Irish Centre for over 30 years, where it hosted ceilidhs, concerts, drama, and music and language classes, before its closure in 1997.

Since then the building has been vacant and has seen several ventures for its restoration, including plans for a hotel, fail.

Now, Liverpool City Council are set to restore the 200-year-old building in coordination with the University of Liverpool and the Merseyside Building Preservation Trust.

Paul Johnston, Communications Officer for Liverpool City Council told The Irish Post that the refurbishment is likely to include a commemoration to the city’s Irish community to ensure that its rich history is not forgotten.

“There’s a very good chance that there’ll be something to reflect the history of the building in some way, although it’s too early to say what it would be,” he said.

“It’s certainly up for discussion, the University are keen to make sure that the city’s Irish community are recognised, but it’ll be confirmed how they will do this down the line.”

The Wellington Rooms first opened its doors in 1816, and hosted high society balls and tea dances, before it was severely damaged during World War II.

It became a focal point for the Irish in Liverpool in 1965, when it officially opened its doors as a community organisation.

In his book Being Irish in Liverpool, Tommy Walsh, the first chairman of the Irish Centre, recalled the community’s 100-year journey to find a “home of our own.”

The Liverpool-born Irishman, who passed away in 2010, described the centre's opening, which was attended by then Tánaiste Frank Aiken, Irish Ambassador Jack Molloy and Senator Tom Mullins, as a “glittering occasion, with massive media coverage.”

In addition, he recalled the fond memories of social events and functions that brought the Irish community in Liverpool together.

“Friday nights drew by far the biggest crowds,” he wrote. “There were no tables and chairs and 500 young people piled in.

“Every Irish nurse in Liverpool and Birkenhead was there, and every young single Irish man too. Numerous marriages resulted from Friday nights in the Irish Centre. 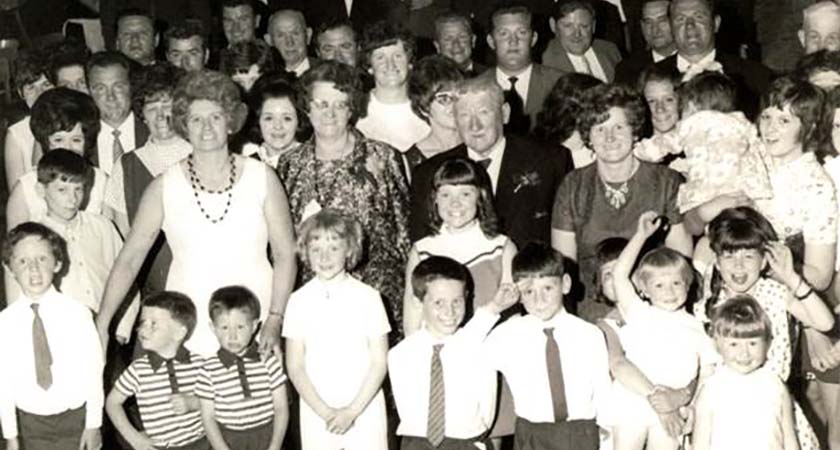 A 50th Wedding Anniversary family party in the Centre for the Kilgallons family (Photo: Being Irish in Liverpool)

“These people became the pillars of both the Irish community and the broader Liverpool community.”

Plans to develop the building include use as an innovation hub to give students enterprise and entrepreneurship training, and will also provide office space to help new businesses develop.

Stephen Holloway, Pro Vice Chancellor of the University of Liverpool, said: "Our ideas for the Wellington Rooms are focused around retaining more graduate talent and send out a clear signal that you can set up a business in Liverpool.”

Bill Maynard, Chair of Merseyside Building Preservation Trust said that whilst the plans for to bring the building back to life were promising, there are challenges ahead.

"There are still significant hurdles to overcome, not least the fact that the building needs millions of pounds spending on it in order to make it useable again.,” he said.

"The key for us now is to look at a range of options and find a viable way of utilising the space inside while at the same time retaining the stunning beauty of the building.”

Do you have fond memories of the old Liverpool Irish Centre on Mount Pleasant? Please share your stories by commenting below or emailing [email protected]