FOUR PEOPLE have died after hundreds of Trump supporters stormed the Capitol in an attempt to stop Joe Biden from being elected.

A large mob descended on the building and forced their way inside, forcing lawmakers-- who were in the midst of confirming Joe Biden's election win-- to be evacuated.

Extraordinary scenes from within the building show rioters damaging property, occupying offices inside the building-- including that of House Speaker Nancy Pelosi and the Chamber itself-- and facing off against police. 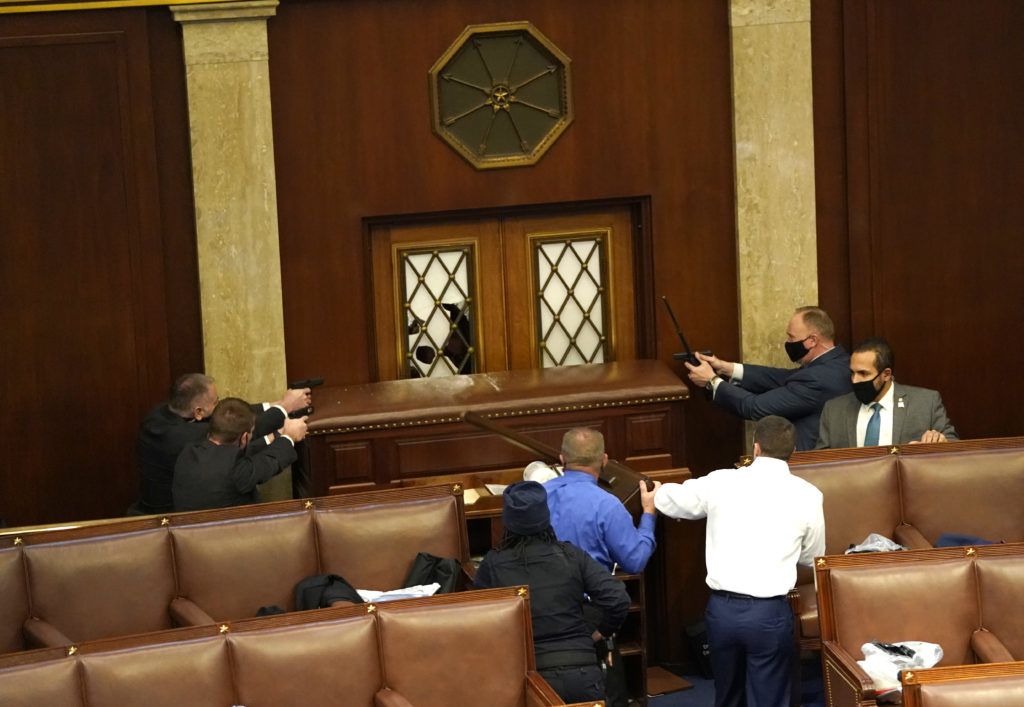 WASHINGTON, DC - JANUARY 06: Law enforcement officers point their guns at a door that was vandalized in the House Chamber during a joint session of Congress on January 06, 2021 in Washington, DC.  (Photo by Drew Angerer/Getty Images)

Just hours ago, police in DC confirmed that a total of four people have died in the night of violence, including one woman who was shot by police as she stormed the Capitol.

"She was transferred to a local hospital, where after all life-saving efforts failed, she was pronounced deceased.

The DC Chief of Police, Robert J Contee, said they are withholding her identification at this time until her next of kin can be informed of her death, and the incident is being investigated by police.

"This is a tragic incident, and I send my condolences to the victim's family and friends," Officer Contee said.

"Any loss of life in the district is tragic," Officer Contee said, "and our thoughts are with anyone impacted by their loss."

The mob's actions, which have been described as an act of sedition, insurrection, or even treason, were condemned by top politicians in America and across the world, including Ireland's Minister for Foreign Affairs Simon Coveney, who called it "a deliberate assault on Democracy by a sitting President and his supporters, attempting to overturn a free and fair election".

Notably, President Trump himself has not condemned the mob's actions, continuing to call them 'Patriots', and saying 'I love you, you're very special', in a video which was supposed to call for peace.