NIALL O’Sullivan and Robert Mulhern hear some of the memories from Irish clubs in Bradford and Botwell, which are near closure, and others in Watford and Ashton-under-Lyne, which have already been lost.

“I’ll never forget the nights we had in the Bradford Irish Club.

“My wife and I joined its Comhaltas branch when it opened in 1988 and it felt like the most Irish place in Britain.

“Well over 100 people would come down. You would have set dancing in the middle of the room, Irish language courses in the corner and then scattered around the club you would have people teaching instruments.

“Laughter and Irish sounds would echo through the building for hours as people literally danced the night away.

“Some of my best memories are from the local competitions we would go to. I especially remember one of the first ones, which was held in Wythenshawe by Sean Dempsey.

“We were going there as novices. But we had our tongues in our cheeks. So we decided that the eight members of the set who went up would wear L-plates on their backs. Those are the kinds of things you remember. 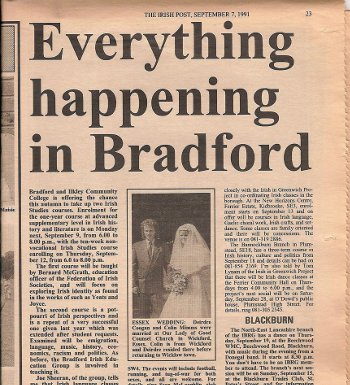 “The club was not just a place to drink, but it was the focus of community. It was somewhere people gathered to share their enjoyment, whether it was over billiards, cards, dominoes or whatever.

“Most of the people involved were middle-aged in those early days. The members were extremely friendly, very collaborative and actually cared for each other. And unlike many working men’s clubs in the area, the Bradford Irish Club was a place where women played a prevalent role.

“It also gave us somewhere to educate local children about Ireland because whenever you learned about Ireland in British schools, Ireland was viewed as a problem.

“Just by having the centre we had a community. We could get together to organise workshops, like the time we had someone in to show everyone how to make soda bread.

“When we had to disband the Comhaltas branch last year I was very upset. We were just about to reach our 25th year.

“We actually had a strong core group of people until very recently, but the membership quickly dwindled and got to the point where it was just not viable. It just ran out of members.

“Really, things have been declining since 2000. Many members have passed away or moved. And there has been a cultural shift in Bradford. People do not go out to places like the Bradford Irish Club or working men’s clubs anymore.

“These days the Irish community in Bradford has a very low profile. The people are still here and you can see the Irish names in the telephone directory, but the club is not what it used to be.”

Joe Sheeran, 80, is a retired teacher originally from Birr, Co. Offaly. He has been active in the Bradford Irish Club for three decades and was heavily involved in its Comhaltas branch from its creation in 1988 to its disbanding last year. 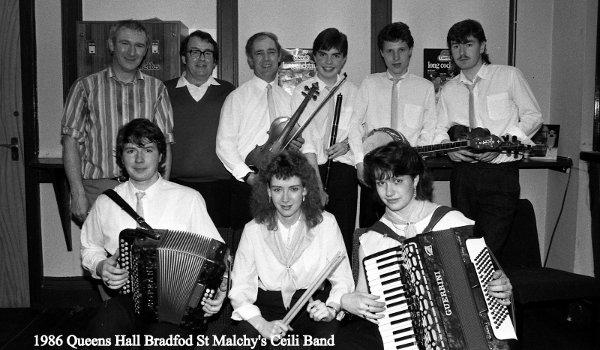 “WE used to hire buses to go on day trips from the club to Barry Island or Bognor Regis; other days we’d all load up and go to the races in Goodwood.

The coach would be waiting outside to collect us at 7.30 but it would be 8.30 before we’d get out. Once about six policemen came over, took off their hats and joined us for a drink. We wouldn’t get back until 11pm at night.

There were about 800 members then. We’d underage GAA teams and senior teams in soccer and football. Denis McCarthy was the man who looked after the GAA and we’d swap players across from the soccer – he’d be asking ‘who have you got that’s tenacious?’

“There was a cabinet inside the club and it was bursting with trophies; Tug of War trophies. We’d a great team and we often took to the road. Not just in Britain but to Germany and Holland and Jersey.

“I always enjoyed that we were a members club; we didn’t rely on big names to fill the place, but there were memorable nights when say a Brendan Shine or Philomena Begley came and played.

“But most weeks you’d be struggling to get into the bar on a Sunday night. The crowd were so many that when people went dancing, drink would inevitably be knocked over.

“There’s a great dance floor, it’s a floating dance floor so it’s not hard on the legs. People loved that dance floor and there were marriages born on it too. My own niece met her husband in the St Clarets Club. It was one of many weddings.

“And so many friendships were formed there down the years.  Last week, my phone rang and it was a friend of mine from Donegal. He said he was over for a few days and would I meet him for a pint in the club? He was a member before he returned to live in Ireland. We used to play together on the football team. When I walked in he was on a stick – the years have passed but then I am 80 now.

“It doesn’t feel that long ago now but the time has gone quick. I became a member when the club first opened back in 1966 and have been involved since. 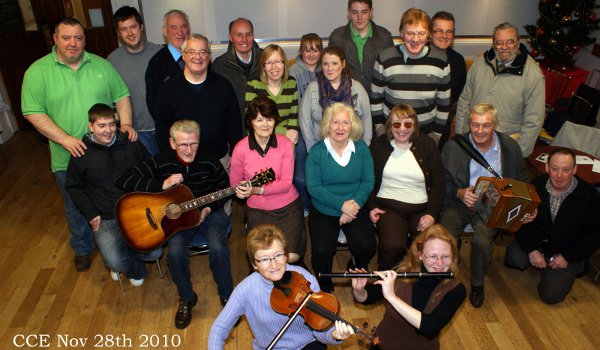 The face of the Bradford Irish club in 2010

“The place has been a constant in my life. A lot of past members returned home to Ireland and a lot have passed away.

“The club had its origins in a music session that used to take place in a youth club down the road. There are still a lot of pictures from those times; many of them are on the walls of the club. I recognise nearly all of them.

“There are debt issues with the club and a fall-off in membership but we’ve been trying to work a resolution and I’m continuing to try and defend the club.” 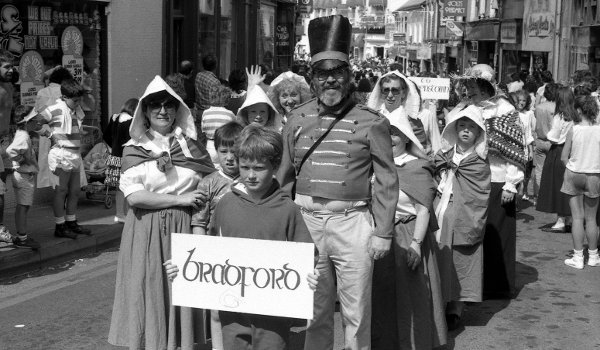 “The memory that always sticks out in my head is the day we opened the club. The ambassador came down, the place was packed and the atmosphere was electric. It was like we’d never left home!

“I also remember when the Fureys and the Dubliners played there. They were favourites of mine and it was a full house for both nights, which meant there were around 300 people bursting out of the doors. Today I keep the photographs of those nights as if they were heirlooms. 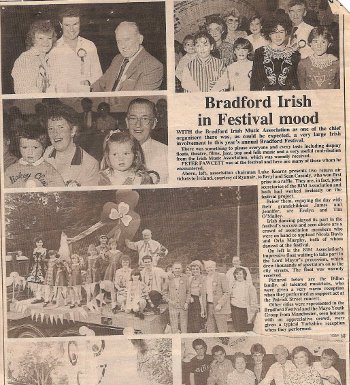 “You just needed somewhere you could feel like you were among your own, even though you were in England. The club was a place that brought people together who had never spoken before and gave them the chance to form friendships that have stood the test of time.

“In Watford it was the only place you could get that atmosphere really.

“But it was also somewhere we could come together for support.

“One friend of mine – John O’Riordan – died of an aneurism when he got home from the club one evening. Having the club meant we could have a wake for him and host the reception after the funeral.

“We used to have benefit dances for members who were down on their luck and we gave money to various families without making it public.

“Now there is no club, it disenfranchises people. They do not see each other and most of the Irish community, at least the first generation Irish, are getting on a bit.

“They are coming towards the end of their lives and in another 20-odd years they will be gone, so a club is more needed than ever.

“We are going to have a dance on St Patrick’s Day at a local cricket club. But it is only going to be three hours of entertainment, not like when we had the club. Hopefully we will get a crowd and it will be the embryo of a new Irish association.”

Michael Canning, 71, is a retired engineer originally from Carrick-on-Shannon, Co. Limerick. He helped found the Watford Irish Club in 1991 and was its chair until 2010.

“IT was a surprise when former President Mary Robinson turned up in Ashton under Lyne Irish Club in 1997. The place was buzzing, people were delighted that someone of that standing would come and visit a small Irish club.

"The place is somewhere that you would pass by easily, not on a main route way, so to get the recognition was a big thing. I remember all the kids outside dressed in green, white and gold and Mary Robinson shaking hands with them all. 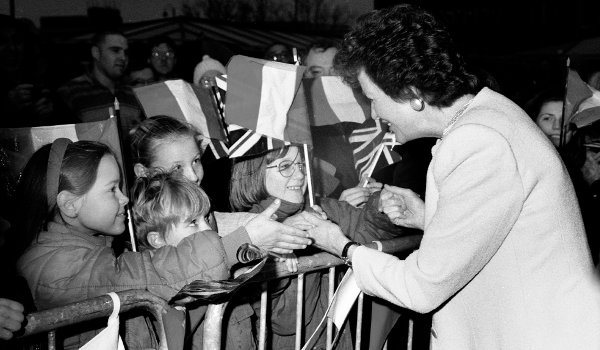 Former president Mary Robinson on a visit to Ashton-under-Lyne

"There was a sense of recognition that this small Irish community was important enough to be paid a visit by the President of Ireland.

"It’s hard to reason now that an Irish club honoured by such a visit has closed its doors for good, less than 20 years later, but more and more in recent years, the Irish influence in the area has become less and less.”