ONE of Britain’s largest Irish communities must rally to protect the future of their city’s St Patrick’s Day celebrations, festival organisers have warned.

Attracting over 80,000 people to the city every March, Birmingham’s St Patrick’s Festival and Parade faces its first year without substantial funding from -Birmingham City Council.

Last year the council -announced plans to cut financial support for major public events in the city, including the gay Pride festival in May, and Hindu festival Diwali in -November.

Birmingham’s cuts form part of a move to slash £113 million from its 2015/16 budget, with a further £250 million of budget cuts to be made over the next four years.

The council axed the annual £20,000 grant given to the St Patrick’s Festival committee, which equates to around 30 per cent of the £70,000 needed to run the event.

Anne Tigue, Chair of the St Patrick’s Festival committee told The Irish Post that despite the cuts, months of fundraising mean they hope the quality of the festival will remain.

“We had a number of contingency plans in place over the last year to ensure that the parade runs as always,” she said.

While volunteers have secured vital funding for this year’s event, further help is needed from the city’s Irish residents to protect the long-running cultural celebration.

“It’s absolutely essential that the Irish community get involved, the festival will only happen for as long as they want it to happen, it’s not something that only a small group can do.

“If everyone just donated £1 that would be enough to get us through to next year.”

The council will also suspend its events management services to the St Patrick’s Festival committee from 2017, with only a small team on hand this year to provide assistance with planning.

With the events teams services valued at £6,000, this will prove an additional loss to the committee. 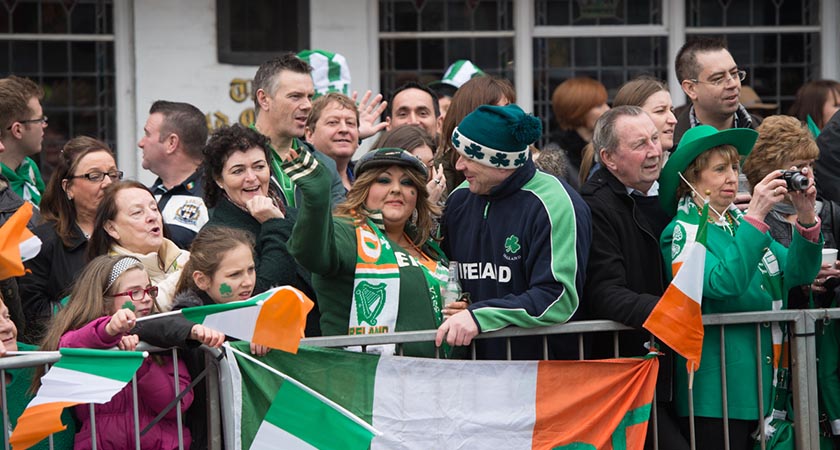 Speaking to The Irish Post, a spokesman for the council said: “There have been cuts across the board, with significant savings being made, so we have withdrawn council subsidy to all events across the city. But we will continue to support all groups in kind.”

Birmingham’s St Patrick’s Festival dates back to 1952 and was the first in Britain, with the parade taking place in Digbeth since 1996.

This year’s festival will launch on Friday, March 4 with a night of live Irish music and dancing at The Macdonald Burlington Hotel, which kicks off weeklong celebrations.

The festival culminates with a two-hour parade on Digbeth High Street on Sunday, March 13, with thousands of onlookers expected.

The future of Nottingham’s St Patrick’s Festival is also under threat after a shortfall of funds, with the cost of this year’s festival estimated at £25,000.

The committee received £5,000 in funds from the Irish Government through the Emigrant Support Programme (ESP) grants, and another £5,000 from Nottingham City Council.

A spokeswoman for Nottingham City council said that while this year’s allocation had been approved, there was no guarantee of funding for 2017.

St Patrick’s Day celebrations in Glasgow face a tougher challenge, as the city is solely reliant on sponsors and the community, as the council declines to make a financial contribution.

Chair of Glasgow’s St Patrick’s Festival, Padraig O’Neill told The Irish Post that the city had long been the centre of controversy in regards to council funding, and he would like to see that change.

“The council gives money to other festivals in the city, but St Patrick’s Day has always been controversial. They’d need to decide whether to give money to the Orange Order or the Irish. We’d like to see a change.”

Organisers of the Manchester Irish Festival do not directly receive the funds from the council, but they are provided with logistical help, including barriers for road closures and advertising boards across the city.

Councillor John Flanagan, Chair of the Festival, told The Irish Post that the value of the council’s contributions is around £100,000.

“Unlike Birmingham, our council is actually increasing its input this year, to mark the 21st year of the Festival and 26th year of the Parade,” he said.

As another one of Britain’s biggest celebrations, the staging of London’s St Patrick’s Day Parade and Festival costs around £160,000-£185,000.

In London, the majority of the funding is provided by the Mayor’s Office, with this year’s contribution equalling £95,000.

The Mayor of London, Boris Johnson, said: “London’s St Patrick’s Day Parade and Festival is one of the biggest and best Irish celebrations in the world. Every March, thousands of people of all ages and backgrounds make their way to the capital to mark the huge contribution several generations of Irish people have made to our great city.

“I’m proud that each year we have been able to stage these world-class festivities, which continue to be a major highlight in the cultural calendar for Londoners from all communities as well as visitors to the city.”