THE official launch of the fourth GAA All Britain Competition took place last night at the Irish Embassy in London.

The Irish Post is delighted to announce that it will once again be the official media partner of the annual three-day event, which takes place this July and is also sponsored by O’Neill’s sportswear and ESB. 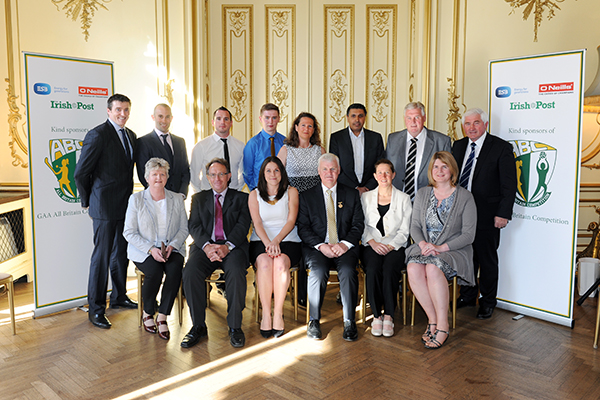 GAA President Aogan O'Fearghail and Barbara Cullinane from the Irish Embassy are picture with organisers and sponsors of the 2015 GAA All Britain Competition.

Hundreds of children from across the country will participate in the ABC at Tír Chonaill GAA Club in Greenford, North West London from July 10 – 12, in what aims to be both a sport-filled and cultural family weekend.

Live music will be provided on the Friday and Saturday evening, encouraging families to continue their long weekend celebration of Irish culture.

Brendie Brien, President of the GAA Provincial Council of Britain, said: "This year’s All Britain Competition is building up to be another great festival of Gaelic Games, with upwards of 100 teams set to descend on Greenford for the weekend.

"Boys and girls, from five and six years of age, right up to 18, from all across the island, will be taking part and it promises to be a magnificent spectacle. 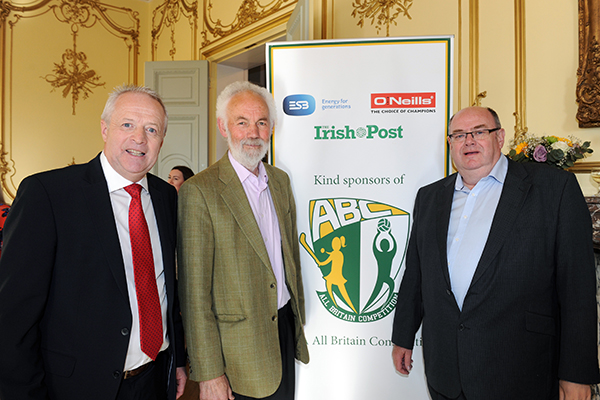 Martin McAviney, President of Ulster GAA, Tom Conneely from the London County Board and Karl McGuigan, PRO of the Provincial Council of Britain. Photo - Malcolm McNally

"We’re delighted that The Irish Post, O’Neills and ESB have come on board again for 2015 and with their help and backing, added to the strong commitment of our volunteers Gaels from across Britain, it’s onwards and upwards for the ABCs."

Sarah Murphy, Commercial Manager of The Irish Post said: ‘We pride ourselves on our outstanding local and national GAA coverage both in print and online and so we are hugely excited to once again team up with the GAA, ESB and O’Neills for this event, which will showcase everything that is positive about the Irish community in Britain."

As media partner, The Irish Post will publish information regarding the activities taking place in its weekly newspaper and online, and will be present in Greenford throughout the competition.

The 2014 ABC tournament was a great success. Photo - Malcolm McNally

The Irish Post looks forward to once again working with ESB and O’Neills sportswear to further strengthen relationships with the Irish and GAA communities in Britain.

Susie O’Neill, General Manager of O’Neills UK, said: "Once again O’Neills Sportswear are delighted to be involved in the 2015 ABC Tournament and supporting GAA in Britain.

"We hope to be involved in this wonderful event, which sees young people from across Great Britain and Ireland join together to enjoy their love of Gaelic Games, for many years to come and wish all involved a successful and enjoyable 2015 tournament in July."

Tahir Majid, UK Public Affairs Manager of ESB UK, added: "ESB is delighted to continue its involvement with the GAA in Great Britain.

"The ABC provides a great focal point for the sport, particularly for younger GAA players, and helps keep alive the strong connections with Ireland."

For further information on the ABC or to register your team contact Lloyd Colfer on [email protected] or Brendie Brien on 079 6199 0888.