POLITICIANS, community leaders and long-term readers of The Irish Post have sent messages of support and congratulations as the publication enters its 50th anniversary year.

Founded in London in 1970 by Tony Beatty and Brendan Mac Lua, The Irish Post is proud to provide a voice for the community across Britain and further afield, campaigning for its rights, supporting its needy and championing its success stories.

As we enter into 2020 we mark five decades of doing just that – charting the progress, development and achievements of the community we serve. 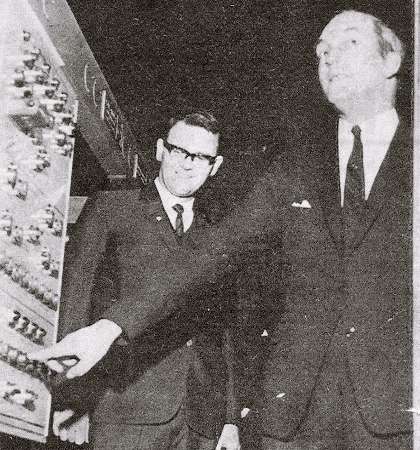 Irish Post co-founder Tony Beatty, left, and Minister for Industry and commerce George Colley, launch the printing of the first issue of the paper in February 1970

Now, of course, the community we reach stretches further than ever through our daily news site irishpost.com, a range of events we host over the course of the year – including our flagship Irish Post Awards – and a series of glossy magazines published alongside our weekly newspaper.

And we have made many friends across that community along the way, some of whom have already been in touch this year to offer congratulations and a memory or two of their newspaper.

Irish Ambassador to Britain Adrian O’Neill led the anniversary messages this week, stating: “My warmest congratulations to the Irish Post on this 50th anniversary and every best wish from myself and my colleagues in the Embassy for the years ahead.

“The Irish Post has been a central part of Irish community life in Britain since 1970, documenting and charting our joys, successes and troubles, our sporting endeavours, cultural celebrations and our business ventures.”

He added: “Today it continues to help knit our community together, bringing us all the news from home, whether home be Ireland or Britain or both, and highlighting the excellent work of so many Irish organisations and the many volunteers who give so much time and energy to improve the lives of others.

“The ongoing success of The Post, today across both digital and print platforms, is a testament to its hard working and dedicated staff and a reflection of the vibrancy of the Irish community in Britain. Congratulations to all in The Irish Post and to all its loyal readers.” 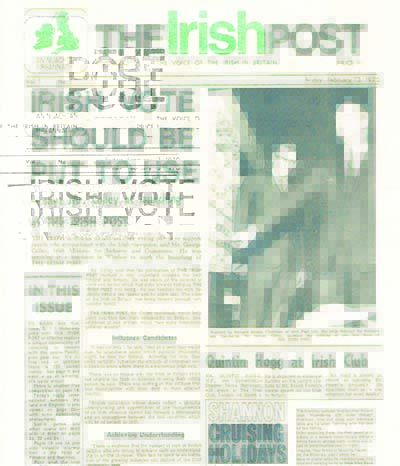 The very first edition of The Irish Post, which was published in February 1970

Irish MP Conor McGinn, who was re-elected to his St Helen’s North seat in the recent general election, reflected on a title which has been “ever-present” in his life since he moved to Britain.

“The Irish Post has been an ever-present part of my life since I moved to England as an 18-year old,” he said this week.

“Looking forward to reading the paper every week has been the constant throughout the almost 20 years I’ve lived here, across London and now in St Helens.

“I’ve even been lucky through working in the community, my involvement in the GAA and as a politician to occasionally grace the front and indeed the back pages of the Irish Post.”

He added: “From uncles who worked on the motorways, aunts who nursed in the hospitals, cousins who’ve run businesses, me in the House of Commons and now my own children growing up as Irish in Britain, I and my family - like so many others - feel part of the Post’s special story.

“I’m proud we have such a strong paper that has always stood up for our community in tough times, ensured our most vulnerable had a voice and always celebrated our successes and contribution to British society.”

Regular contributor Gerry Molumby has been a reader of The Irish Post since he arrived in London in 1979, finding it a valuable tool as he navigated his new scene and one that remains just as important today for the many Irish still arriving on British shores each week.

“When I came to Britain at the end of 1979 I assimilated into life in London, but I found myself feeling a greater sense of my Irishness, which I suppose I took for granted growing up in Ireland,” he said.

“In this pre-internet era community cohesion for emigrants was achieved by going to the various Irish centres and reading The Irish Post - the voice of the Irish in Britain.

“When I started Triskellion Theatre and Cricklewood Homeless Concern, a profile in the paper would guarantee you good attendance at your event,” he added.

“The paper, like the community, has evolved over the years but The Irish Post has retained a weekly and now online platform for the Irish in Britain; to share and discuss views on what it is to be Irish in Britain.

“In its 50th year it will be good to look back through the photo archive of the paper, the history of our moments of challenge and change.

“Whether born in Ireland and in Britain because of forced emigration in the 1950s and 60s or a young university graduate headhunted for a job in Britain, or part of our great second and third generation, that is our continuing story as told and archived by The Irish Post.” 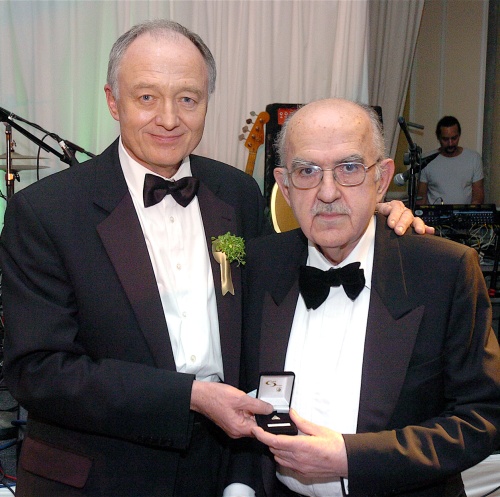 Martin Collins was a political contributor to The Irish Post in its early days.

He shared some insight this week of the mindset of co-founder and former editor Brendan Mac Lua.

“The unforgettable owner-editor, Brendan Mac Lua, once told me that most people from Ireland who arrived in England, Scotland or Wales would admit they had very little idea about what to expect on the other side of the water,” he said.

“He thought The Irish Post could give them hope and help create the community they all deserved.”

He added: “For 50 years The Irish Post has championed Irish arts, sports and culture. It encouraged the peace-makers, mourned for the victims and spoke out against injustice.

“The Irish Post has sought recognition for Irish Navvies, Irish Nurses, Irish teachers and all those who helped shape modern Britain.

“From Donegan to Donovan, Lennon and McCartney, or take your pick of Ed Sheeran or Lisa O’Neill - The Irish Post has championed all of them and all of us.”

In Manchester community leader Kevin Fitzpatrick, manager at St Kentigern’s Irish Club in Fallowfield, sent a message of thanks on behalf of all his members.

“On behalf of all my customers past and present and everything from community groups to GAA and dancing and music lovers here – we just would like to say thanks to The Irish Post for all the hard work of getting the messages out to a wider audience.

“And for myself and St Kent’s parish, we say thanks for all the stories featured letting the Irish community know about us - especially over the last few years when social media almost took over.

“The paper is always there to be read, and that has meant a lot to the older generation.

“We wish you a great 50th year of celebrations and well done to everyone.” 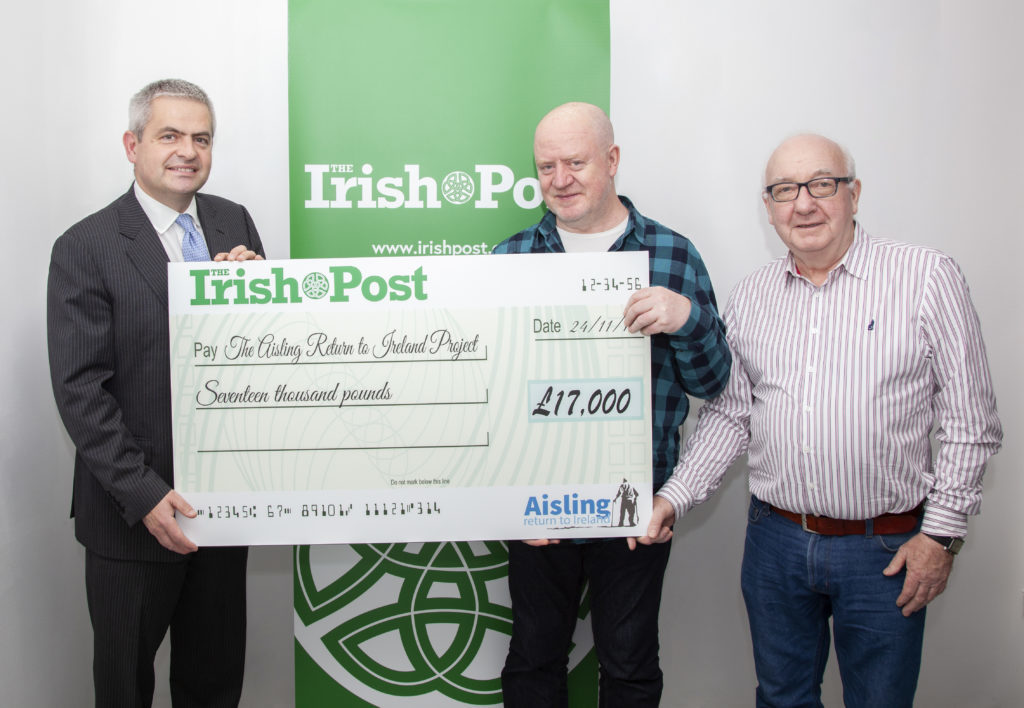 Current Irish Post owner and publisher Elgin Loane, pictured left here, presenting the Aisling Project charity with a cheque for £17k, bought the title in 2011 and has driven its success in print and online since then (Pic: Irish Post)

Also in Manchester Tony Hennigan, Creative Director of the Young, Gifted and Green cultural organisation, sent congratulations on behalf of the troupe.

“Congratulations to The Irish Post on reaching their 50th anniversary, from all at ‘Young, Gifted and Green’ who are celebrating their own 25th Anniversary Concert this year,” he said.

“The Irish Post have covered every part of our success in raising over £200,000 for different charities with our sellout Irish music, song and dance concerts all over the UK, and covered countless appearances on various TV shows.

“The paper has recorded every step of the journey and brought the organisation and its performers worldwide recognition.”

For London Irish businessman Gerry Keany the 50th anniversary provides an opportunity to acknowledge The Irish Post’s ongoing support for the business community and the third sector.

“From feature articles, The Irish Post Awards, quality supplements, such as the Building Britain magazine, as well as using Irish suppliers where possible, The Irish Post plays a leading role in highlighting and developing Irish business in Britain.”

He added: “I’m also proud of the assistance The Irish Post gives to charities, such as those my business supports - including ICAP, The Lighthouse Club and the Aisling Return to Ireland Project.

“The Irish Post does not limit its involvement to publicity and media partnerships but gets actively involved - for example helping raise over £17,000 to replace the Aisling minibus recently as well as organising a highly successful soccer tournament in 2018 for the charity.”

Fiftieth anniversary congratulations have continued to come in from across the country this week.

The Irish Post will be marking its 50th anniversary milestone across 2020, so look out for news of when and where you can join in the celebrations.

If you have an anniversary message or memory you would like to send us, please email [email protected]