LOCALS and regulars at an Irish pub in Coventry are being asked to share their memories to help mark the watering hole’s 50th anniversary.

The Four Provinces first opened on Good Friday in 1965 and has a range of plans to celebrate their 50-year milestone across 2015.

Among the highlights is a project designed to gather the memories of people who have used the Irish pub over the decades – which may provide the basis for a photo exhibition or even a book documenting the legacy of the community in the area.

“We are still finalising all the arrangements for the 50th anniversary celebrations, but we are currently appealing for people to pop in and share their memories and photos with us,” the team behind the recently relaunched pub told The Irish Post this week. 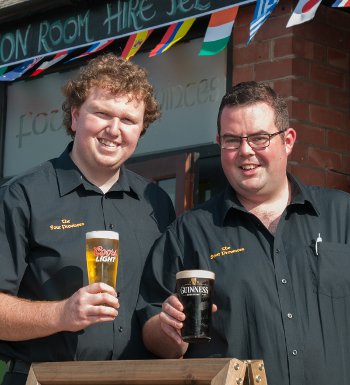 Best friends Alex Ceairns and Martin Ryan took over the bar in 2014 and have spent the past year striving to bring it back to its Irish roots.

Both men were born in the city, raised among the community and frequented the family-friendly venue, based in Chapelfields, in their youth.

They also pulled pints there as teenagers, while working for previous owner Kieran Connolly.

Now the pair are hoping their anniversary events - which are also set to include a family fun day over the summer and a dinner dance later in the year - will help rekindle more of their Irish roots while also raising funds for the local Coventry Irish Association.

“The pub has a rich history and has been part of the Coventry Irish community since it first opened on Good Friday as a private members club in 1965,” they added.

“Since around 2000 it has been run as a pub and our anniversary is a great opportunity for the community, new and old, to join the celebrations."

Locals have already begun logging their memories of The Four Provinces, with Mary Ryan contributing a picture of family members Con Durack, Annie Durack and children Conny and Mary Durack in the pub back in 1967.

For further information or to add your photos or memories to the archive, drop into the pub in Allesley Old Road, where staff can copy and return your photos, email [email protected] or post your images and memories on The Four Provinces Facebook and Twitter pages.