'Hey Britain, you left us, now I want to leave you'

I DON'T believe in pathetic fallacy but the night before the EU referendum the skies clattered and thrummed with thunder and lightening before opening and unleashing a deluge of biblical proportions.

I had been out celebrating Ireland's win at the Euros, that big football competition that we all go communally crazy for every four years. “If you vote leave we'll kick you out of the tournament,” I said jokingly to an England fan next to me in the pub.

In the end, Britain kicked itself out. Of the 72 per cent of us who turned up to vote, about one million more wanted out than in.

Well, they've got their way and so the negotiations begin.

For me, the first negotiation is personal. Britain has been in the EU since before I was born. As an Irish citizen, who loves being part of Europe, one of the main reasons I moved here six years ago was because it was an EU country. I chose London specifically because I knew it to be a multicultural melting pot.

Yesterday, I was confident that London would vote in. Outside Shoreditch High Street Overground station, I got a thumbs up for wearing my 'I'm In' sticker, in Pret I got a free coffee from the foreign barista.

And London did vote in, as did Scotland and the North of Ireland.

But naively, I hadn't accounted for the rest of England, most of which I admit, I have never set foot in, and whose grave concerns about immigration I clearly do not share. Maybe that's because as an immigrant, I see it as such a healthy, enriching part of my life.

I learned French in school, my first holiday was to Spain and I'm the number one fan of Italian wine. During Ireland's Celtic Tiger days, an influx of Polish people came to Ireland (many choosing Cork, where I am from ) and I was, and still am deeply impressed by the way they took to all our cultural oddities and worked their backsides off to build a life for themselves.

When the financial crash happened, the reports of the hardships being faced by the most vulnerable Greek people made me feel desperately sad. I have been to Greece several times, I love the people, the culture and the food. I wanted to help.

I'm not being facetious by saying these things, Europe is part of my DNA and I feel a great solidarity with my European neighbors. The fact that Britain doesn't want to be part of that anymore  has come as a shock, and as the shock wears off, sadness sets in. 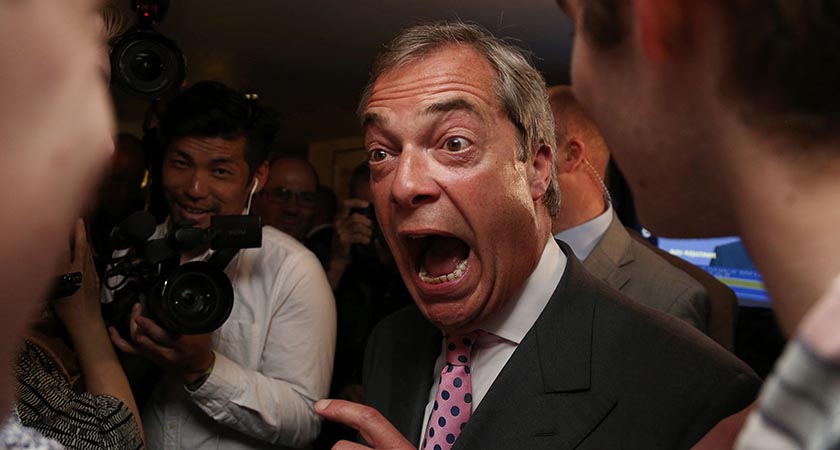 Of course, Nigel Farage says this is "a victory for ordinary people, for good people, for decent people", "the dawn of Independence." In pretty much every other instance I would be all for championing the rights of the "ordinary", the underdog, but as a person who is very ordinary, and not at all affluent, I can't see this as a win.

I am also 100 per cent anti-Tory and anti-establishment. I thought the day David Cameron resigned would be a cause for celebration, but now we are faced with the very real prospect of something worse (I'm looking at you Bo Jo).

That same English man I mentioned earlier (the one I met in the pub while watch Ireland vs Italy) said he was voting Leave because he didn’t like the EU bureaucrats making decisions for him - he wanted Britain to make its own choices.
“It’s anti-democratic,” he said. Really? I replied, that’s pretty rich coming from a country that’s happy to keep a Queen in Buckingham Palace.

I’m not the only one who’s heavy hearted this morning. My Irish friends in Britain and at home seem to feel the same. Here's a few comments from Facebook and Twitter.

"Not so great Britain."

"Toto, we're not in Kansas anymore."

"Poor Northern Ireland. That's years of a painful and devastating peace process down the toilet."

"Is there an emoticon for feeling shocked, weirded out, sad, confused and scared....All at once. ‪#‎Brexit‬"

My English flatmate, and another English friend wrote that they were “embarrassed to be British” today.

Out of context as they are, the words that came to my mind were those of good ol' W.B Yeats: "All changed, changed utterly."

There are so many balls in the air now, so many reasons to feel insecure and maybe even a bit unwelcome here. But before we all get our heads around the markets and the politics, I have to make another Leave/Remain choice myself.

Finally, I suppose I have to say something to all those who voted to leave. Congratulations feels wrong so I'll say this instead: Nigel Farage's Britain – you're welcome to it.

By: James Conor Patterson  -  3 weeks ago