Irish Central reports that Clinton was in attendance, along with leading Irish American figures from the worlds of  business, political and philanthropy.

She was honoured for her role in the peace process, in particular for her work with the women of Northern Ireland.

Clinton accepted the honour on behalf of the women she has met in Northern Ireland, including activists Joyce McCarten and Inez McCormack. 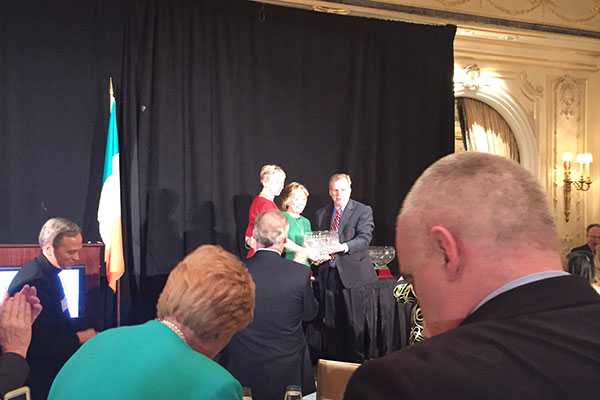 At the event, the former Secretary of State spoke about the risks the people of Northern Ireland took in suspending “disbelief to look for a way forward” and those women she met who “would not take no for an answer.”

Clinton said, “There is still work to be done but that remains a crucial lesson: you cannot bring peace and security to people just by signing an agreement. In fact more peace agreements don't last.

There's been some very important work done in recent years that shows that where women are involved and, therefore, where the work of peace permeates down to kitchen table, to the backyard, to the neighbourhood, around cups of tea, there's a much better chance that an agreement will hold.”

She concluded that while “the work in the North is not finished, even as we speak negotiations to try to resolve governmental issues…it's better to have people arguing about that than walking away and thinking that conflict may be the only answer.”

Also taking their places in the Hall of Fame were businessman and philanthropist Bob McCann, explorer and commentator Emmett O’Connell and Pat Quinn, founder of the famous ALS Ice Bucket Challenge.

Hillary Clinton is the first person without Irish roots to be inducted into the Hall of Fame.