File Photo INDEPENDENT SENATOR GERARD Craughwell has said there must be an election for the position of president of Ireland – and that’s why he is throwing his hat in the ring for the job. Craughwell, who won a controversial Seanad by-election, beating Fine Gael’s reluctant candidate John McNulty, took to Twitter on Sunday night to say he was putting his name forward to ensure there is a contest when the election happens. A presidential election is due to be held in October 2018. However if no-one contests the election, current president Michael D Higgins could be given a free run at a second term. During the 2011 presidential election, Higgins repeatedly pledged that he would only stand for a single seven-year term. However since being elected, the president has refused to rule out the possibility of a second run for Áras an Uachtaráin. End. 10/10/2014 Seanad By-Election Count. Independent candidate Gerard Craughwell talking to the media outside on the plint at the Dail after he has won the Seanad by-election, beating Fine Gael's candidate John McNulty. The result means the government has now lost its majority in the Seanad, with 29 members to 31 opposition party and independent senators. Photo Mark Stedman/RollingNews.ie

A FORMER Royal Irish Ranger and current Irish Senator has announced his plans to run for President of Ireland.

Independent Senator Gerard Craughwell, who emigrated to London at 16 to work before becoming a Ranger, announced his plans to seek nomination to become the Irish Head of State on Twitter.

The Senator announced his pledge as current President Michael D Higgins nears the end of his seven year term in November 2018.

When President Higgins was elected in 2011, he said he would not run for a second term, however there have been recent calls for him to run for the second time, without contest.

Taking to Twitter Senator Craughwell was reacting to an opinion piece in the Sunday Business Post by Elaine Byrne which said if President Higgins to decided to stand again for another term, he "would be breaking his word to the Irish people."

An excellent piece in todays @sundaybusiness by @ElaineByrne setting out why President Higgins must not stand again for President.

I note people referring to the Presidents age. That to me is irrelevant. He gave his word ONE TERM WAS ALL HE WANTED he has had that. End of

I have known MDH from the beginning of his political career & I believe him to be honourable. I believe his word to be his bond. #integrity

Announcing his pledge to stand for nomination for President of Ireland, the Senator said: "There should never be a gifted political position in any democracy. Hence, there must always be an election for President.

"I love this country despite all its failings. However, the office of President must always be won by democratic election. Not an old boys club.

"There are many problems in this country, homelessness, health, Defence Forces, education, justice. But democracy must never be ignored. 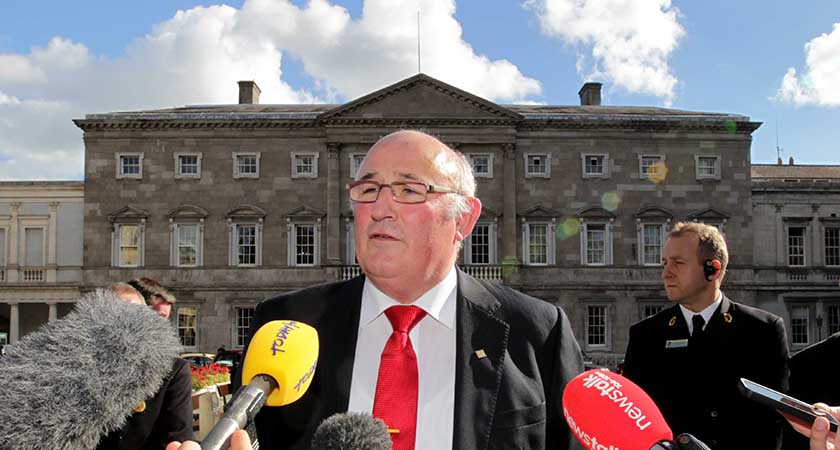 If Senator Craughwell secures a nomination, he could contest President Higgins continuing his presidency into a second term. (Picture: Mark Stedman/RollingNews.ie

"[I'm] seeking nomination for President. I have no money, I was late to education, I've struggled all my life. Yes I've no chance but democracy demands that all presidents should be elected, not agreed between political parties.

"Look, I'm just a simple guy who believes nobody has a God-given right to any democratically elected office and that includes the President."

If Senator Craughwell secures a nomination from at least 20 of the 218 serving members of the Houses of the Oireachtas, or at least four of the 31 county or city councils, he can then contest President Higgins' presidency when his term ends.

Originally from Galway, Senator Craughwell emigrated to London in the late 1960s, where he worked in pubs before becoming a Royal Irish Ranger.

He then returned to Ireland after five years, where he then joined the Irish Army, where he became a sergeant.

Senator Craughwell then went into further education at the age of 35, where he received a degree in economics, accredited by the London School of Economics and began teaching in Dublin.

He was later the President of the Teachers' Union of Ireland.

The Senator entered the Seanad in 2014 after a vacancy arose.

His appointment was somewhat of a surprise after he put himself forward in August 2014 as an independent candidate, initially to protest against the usual practice of the Government using its parliamentary majority to secure the election of its chosen candidate.

He secured nomination from members, and unexpectedly won after a Fine Gael competitor withdrew.