AN IRISH man has admitted on live radio that he breeds and sells pug puppies to Britain which are then sent to Asia.

The caller, named Gerry, told Adrian Kennedy on 98FM's Dublin Talks last week, July 20, that he breeds the pups to sell on to Britain, which he then knows are transported to Asia.

"What I do for a living is I breed pugs, Chinese pugs, and send them over to England," he said.

"I don't know [if they're sent to be eaten] but I think they are, because it's always the Chinese pugs they want. I think it's because they're fatter.

"I'm not ashamed of myself, it's business. They're out of my hands, it's the other guy and it's nothing to do with me. I get €300 a pup of him and he does his own business with them."

"You don't care what happens to them after that?" Kennedy asks.

Also on the show, Nicole Matthews from the Irish Council Against Blood Sports said: "We have become known as the puppy mill capital of the world, and certainly Europe at this stage, for the trafficking of puppies and overbreeding of puppies.

"I have no words for that."

In a statement to The Irish Post, a spokeswoman for the Dublin Society for Prevention of Cruetly to Animals, said: "The illegal puppy trade in Ireland is still an issue and the DSPCA, in conjunction with other agencies such as Operation Delphin which included the Ulster SPCA, RSPCA, Scottish SPCA and the ISPCA are monitoring the ports out of Ireland and into the UK for this illegal puppy trade.

"It appears that many people still do not know the laws or choose to ignore the legal requirements of pet passports, dog microchipping and transport requirements.

"With reference to the dog meat trade from Ireland, the DSPCA however are investigating the claims."

Previously, Ireland has come under fire for its failure to protect Irish greyhounds being exported to Asia for the dog meat trade.

In May 2016, Robert Green, owner of the Banteer Schooling Track, C.o Cork, attempted to export 24 young dogs to Macau.

The dogs were turned away from London’s Heathrow Airport, on the grounds that the crates they were being held in were in bad condition and not fit for transport.

Campaigners from Stop Exportation of Greyhounds from Ireland to China say the dogs are being sold for around €2,000 each.

The Dogs Trust, ISPCA and The Irish Blue Cross said: “As a nation we have in recent years attracted adverse international coverage about the welfare of our horses – let us not go down the same route with the welfare of our greyhounds, a noble dog synonymous with Ireland.”

More recently, after footage emerged of a greyhound being boiled alive in China, Rita James from CAGED North West, (Campaign Against Greyhound Exploitation and Death) told The Irish Post: “We were mortified by the content of the video and believe this is an example of how dogs are treated in countries where there are no welfare laws whatsoever.” 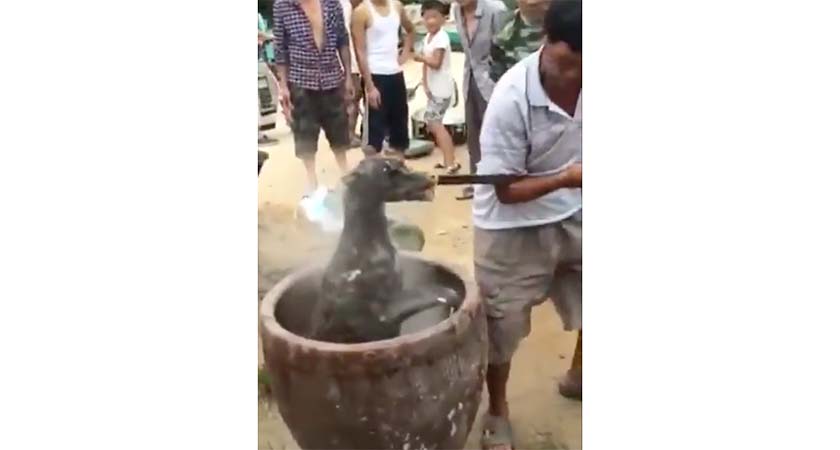 “China is just one of the countries that concern us, but dogs are also being exported to countries such as Pakistan where there is equally no protection from inhumane conditions and death,” she added.

“Ireland does not protect the greyhounds that they breed for commercial racing," she said.

"We urge the Irish Greyhound Board and the Department of Agriculture, Food and Marine to take responsibility for the greyhounds bred for racing in Ireland and immediately cease all exports of these dogs to countries where there are no animal welfare laws.

“Perhaps we should not be surprised that greyhounds are being sent abroad with no regard for their lives," she added, "while they are so mistreated in Ireland itself, and regulations are poorly enforced.”

However, the Irish Greyhound Board have said that legislative action may be needed at EU level as there is currently no prohibition on the exporting of the breed, as the movement of all dogs between EU Member States is currently set on a European level and this may require further legislative changes to be sponsored at a European level rather than as a national measure in isolation.

Speaking on this issue Barry Coleman, Welfare Manager with the IGB stated: “Concerns over exports relate to all dogs, not just greyhounds. Some of the practices involving dogs in other countries are absolutely appalling and horrific. The IGB are opposed to exports to countries that do not meet Ireland’s welfare standards and we would welcome legislation in this area.”

Responding specifically to claims by Ms James regarding regulations in Ireland, the IGB said they fully enforce all greyhound welfare legislation.

In 2016, IGB welfare officers completed 571 inspections of kennels which resulted in 34 full investigations and over 20 sanctions being issued.

Each year, the IGB liaises with the ISPCA and An Garda Síochana where appropriate to investigate and prosecute for mistreatment of greyhounds.