On Tuesday, January 12 customs officers carrying out a routine check at Dublin Port searched a car. Instead of detecting illegal drugs or cash, the trained customs canine, named Meg, detected some-thing else — the scent of another dog.

Upon opening the boot of the car, 18 puppies near death were discovered. The pups, a mix of -expensive breeds such as Shih Tzus and Pomeranians were on their way here, to be sold illegally as British-origin pups.

There are an estimated 70,000-80,000 pups exported from Ireland to Britain every year. The DSPCA estimates the Irish puppy -industry accounts for about 10 per cent of the total puppies sold in the UK says Gillian Bird, a Certified Humane Education -Specialist and spokesperson for the Dublin Society of Prevention of Cruelty to Animals.

The laws set out by The Department of Agriculture, Food and the Marine in Ireland are very specific. Any dogs (or cats and -ferrets) being moved from Ireland for sale, or a change of ownership must have a microchip. (From April of this year, a new law in Ireland comes into effect, stating that all dogs must be microchipped). The dogs must also be accompanied by an EU Pet Passport. That passport ensures the dog is microchipped and that a vet has seen it and vaccinated the animal against diseases such as against rabies.

But these laws don’t stop greedy criminals who illegally transport dogs from Ireland to Britain where they sell them for thousands of pounds. (For example four-month-old ‘teddy bear’ Pom-eranians, similar to those sized in Dublin recently, are -advertised online for £4,600- £5,000.)

Gillian Bird says dogs coming from Ireland and being passed off as pups originating from Britain is a big problem that isn’t getting the attention it deserves. The -issue is well-intentioned buyers just don’t know where the adorable puppies they see have come from, if they are healthy or if they are in fact what the breeder claims they are. 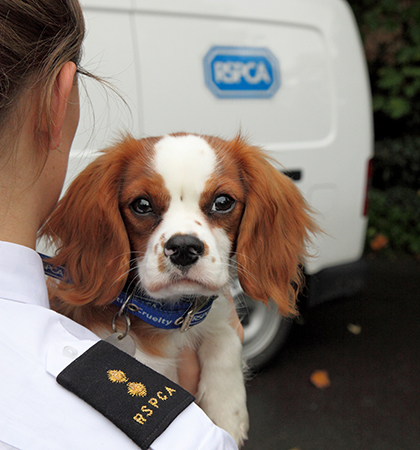 So what should dog buyers look out for?

“Any legit breeder will let you see the dog feeding from its -mother. The dog breeder should let you see the pup still feeding at about four weeks, before the puppy is ready to be taken to its new home at about eight to nine weeks,” says Bird.

“If for any reason the breeder says the pups have been sep-arated from their mum, or that the mum is in the kitchen -because she’s narky with the pups or anything like that then you should be asking serious questions,” she states. “If you are in any doubt, do not take the dog just because you feel sorry for it.”

Bird ends by urging anyone who suspects the dog has come from Ireland to contact the DSPCA.

In 2014, the UK pet population was estimated at nine million dogs. According to figures -released in the same year, the RSPCA alone has rescued more than 128,209 animals from being trafficked, kept on puppy farms and sold by callous dealers on to unsuspecting members of the public, but that figure is just the tip of the iceberg.

The bad news, according to Chief Inspector Ian Briggs from the RSPCA Special Operations Unit is that the cruel puppy trafficking industry is growing.

Scroll down for advice when buying a puppy...

“Alarmingly the whole issue around puppy trafficking, dealing and farming is on the increase. We are hearing from more and more people across the country who have bought puppies that have fallen ill or died. It is heartbreaking”.

What many dog lovers may not realise is that by buying a dog online or from a puppy farm they are supporting a cruel industry run by people who have no care or consideration for the puppies they are trafficking.

Many are kept in awful conditions, then taken to set ups made to look like family homes to fool the public.

Yvonne Taylor, Senior Man-ager of Corporate Projects PETA UK spells out the awful conditions the dogs are kept in. 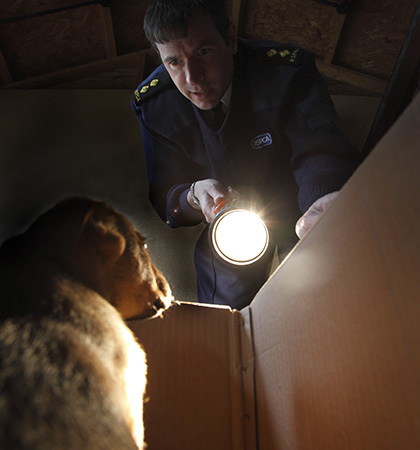 “They can spend their entire lives in cages, and they’re denied the chance to follow their natural instincts, including raising their own puppies. Mother dogs will have their young torn away from them as soon as possible so that they can be impregnated once more. When their bodies are spent and they can no longer -reproduce, they’re often killed.”

The RSPCA is calling for mandatory licensing for anyone selling puppies in England to tackle illegal trafficking and opportunistic backstreet breeding. This would mean a host of new measures including stronger penalties and fines for anyone caught -selling a puppy without a license.

RSPCA Assistant Director of Public Affairs David Bowles says that because the current laws are not good enough dogs are being traded like scrap with no regard for their welfare. “Puppy trafficking is big business and dealers are getting rich from duping members of the public and leaving a trail of sick and dead puppies behind them.”

Yvonne Taylor, of PETA UK says this time of year is particularly bad. “In the days, weeks and months following the holidays, already overwhelmed animal shelters across the country will find themselves flooded with unwanted animals who were given as gifts, only to be tossed out when the novelty wears off or their guardians discover that -caring for rambunctious puppies and kittens is a full-time job. Not all animals are lucky enough even to make it to shelters – there are always terrible cases of -animals being binned, drowned or starved in the UK and Ireland.

Taylor says that the “unscrupulous” pet trade actively encourages the public to view animals as frivolous impulse purchases, “no different from fashion accessories that can be acquired on a whim and discarded.” 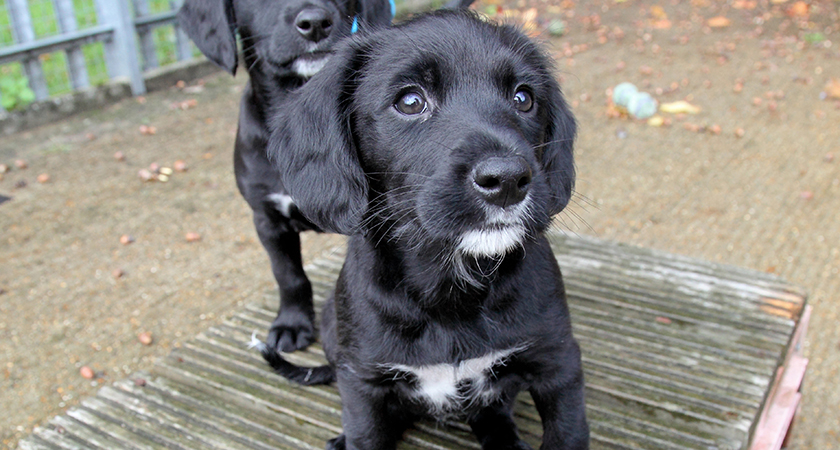 PETA’s advice is clear “Don’t shop – adopt!” says Taylor. “If you’re considering adding a new animal companion to your family, please don’t ever buy from a breeder, a pet shop or an online advertiser and instead visit your local animal shelter.”

She points to the distressing reality is that about 21 dogs are euthanised in shelters across Britain every day, something that could easily be avoided if more people were willing to take a pet that needs a loving home from a shelter rather than set their heart on a designer breed.

And the problem for dogs and puppies doesn’t stop there. -Another sickening statistic from a Dogs Trust survey last year revealed that more than 47,000 people abandoned their dogs at council pounds and that more than 5,000 dogs had been euthanised.

Adrian Burder, Chief Executive of Dogs Trust comments: To learn that over 47,000 unclaimed and unwanted dogs are left in council kennels should shock us as a nation of dog lovers. Abandoning a dog is simply unacceptable and sadly, Dogs Trust’s famous slogan “A Dog is For Life” is as significant as ever. If you are not ready to care for a dog for its entire life, do not commit to -becoming a dog owner.”

To learn that over 47,000 unclaimed and unwanted dogs are left in council kennels should shock us as a nation of dog lovers. Abandoning a dog is simply unacceptable and sadly, Dogs Trust’s famous slogan “A Dog is For Life” is as significant as ever. If you are not ready to care for a dog for its entire life, do not commit to -becoming a dog owner.

That advice is something we’ve heard many times before but sadly for man’s best friend, it still seems to fall on deaf ears.

Advice when buying a puppy

Make sure you don’t line the pockets of the puppy traffickers – here are some tell-tale signs to watch out for:

1. Always see the puppy with their mother in the place where they were born

2. Never buy from someone who offers to deliver the puppy, or meet you somewhere with the puppy

4. Pay attention: is the puppy bright and alert or lethargic and nervous?

5. If something doesn’t seem right, it probably isn’t — walk away and report your concerns to the RSPCA immediately on: 0300 1234 999. Use the RSPCA/AWF Puppy Contract for the best chance of buying a happy, healthy puppy.