Ireland's Budget 2014: what you need to know

Among the controversial measures in Budget 2014 are a lowering of the jobseeker’s allowance to €100 per week to all under-25s and a scrapping of telephone allowances for pensioners.

Elsewhere, beer, spirits and cigarettes are all to go up by 10 cents, while wine is to go up by 50 cents, following on from last year’s €1 VAT hike on a bottle.

Reduced to zero per cent with an aim to encourage airlines to build new routes and traffic.

No increases in any of the three tax categories.

Surprise here as reduced rate of 9 per cent for tourism sector to be retained.

All other VAT rates are to remain untouched.

Any lump sums paid to survivors as part of a compensation scheme will be tax exempt.

An additional levy on pension funds at 0.15 per cent will be introduced.

A new higher single unified rate of 41 per cent for DIRT and the exit tax that applies to life assurance policies and investment funds has been introduced.

Those unemployed, and starting their own new business, can avail of the ‘Start Your Own Business’ Scheme, which will allow them to be  exempt from income tax for two years.

No change as the Minister said Ireland is 100 per cent committed to its 12.5 per cent Corporation Tax rate.

The Finance Bill will be changed to secure Ireland’s reputation as being “part of the solution” to the global tax crisis and not “part of the problem”. The change will ensure Irish registered companies cannot be “stateless” in terms of their place of tax residency.

There will be no increase in excise duty on petrol or diesel.

There will be no increase in motor tax.

Beer, cider and spirits will all rise in price by 10 cent.

From midnight, cigarette packets will be taxed 10 cent more.

Bottles of wine will be taxed an extra 50 cent more.

Tax relief for medical insurance will be capped at €1,000 for adults and €500 for children.

Irish banks will be expected to make an annual contribution of €150 million to the Exchequer annually.

The farmers’ flat rate addition is being increased from 4.8 per cent to 5 per cent from January.

The Capital Gains Tax retirement relief has been extended to disposals of long-term leased farmland in certain circumstances so older farmers will lease out their land to younger men and women.

Any property bought next year will be exempt from Capital Gains Tax.

The tax relief credits will be changed from the One Parent Tax Credit to a Single Person Child Carer Tax Credit. Only the primary carer, rather than both single parents, will be able to claim the credit which is of equal value to what it is replacing. 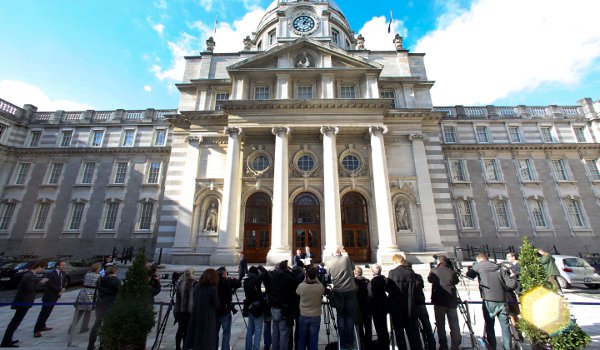 Here are the main details from Brendan Howlin’s statement:

Free GP care for all those aged under five years old will be introduced. The cost to the State will be €37 million

Income thresholds for medical cards for those  over 70 reduced to €900 for a couple and €500 for a single person.

Maternity benefit standarised to €230 per week for new claimants from January. It is currently between €217 – €262.

The total adjustment is €290m.

€100 reduced rate of Jobseeker’s Allowance and Supplementary Welfare Allowance to existing recipients who reach 22, and for new entrants aged up to 24 on or after 1 January 2014, has been extended.

Another reduced rate of €144 for jobseekers will apply to those reaching 25 from January next year.

The number of waiting days for entitlement to Illness Benefit increased from 3 days to 6 days to save €22 million.

The telephone allowance will be discontinued to save €44 million.

Some hiring in schools, hospitals and An Garda Síochána but the wage bill will still be cut by €500 million.

Plans to hire 1,250 new classroom and resource teachers for the school system.

€200 million raised from the sale of the National Lottery will be used for:

The €850 once-off payment to bereaved families will be abolished to save €17 million.

Annual payment to RTÉ for TV Licence will be reduced by €5 million.