IRELAND is currently among the world-leading nations in terms of Covid-19 vaccine rollout, according to data and research publication Our World in Data.

Their research team found that Ireland has one of the very best seven-day rolling averages of vaccine doses administered per 100 people around the globe.

As of Friday, Ireland is administering 1.19 vaccines per 100 people, a figure topped only by Portugal, Canada and Sweden.

Meanwhile, the US currently has a rate of just 0.15. 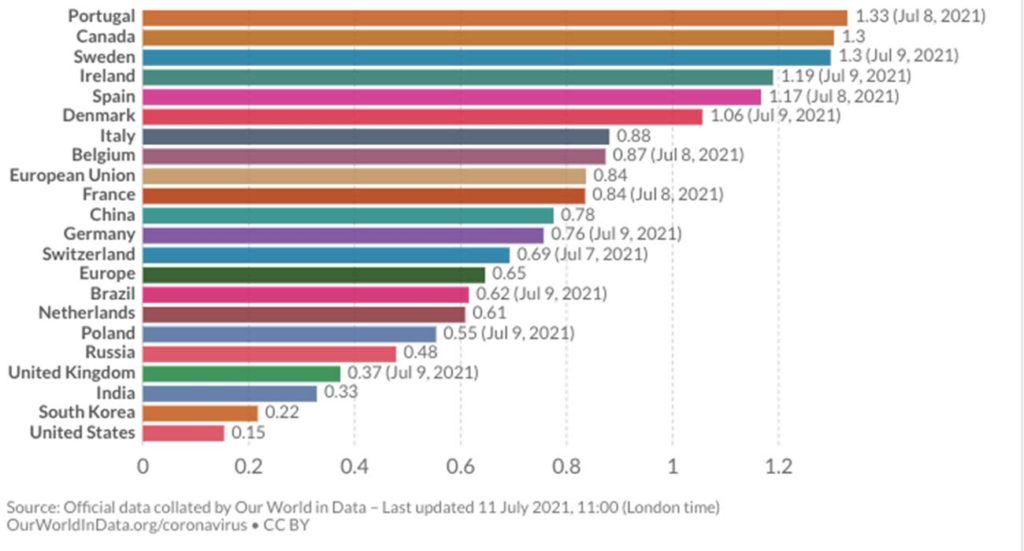 Pic: Our World In Data

Ireland's vaccine rollout has experienced highs and lows over the past few months, but with stocks high and vaccine uptake record-setting in Europe, the programme is moving swiftly.

On Monday, HSE chief Paul Reid revealed that 56% of the adult population is now fully vaccinated, and that over 70% of adults have received at least one dose.

"We're now ranking as the highest in the world for the last seven days of vaccines administered per 100 of the population," he told RTÉ.

Registration for vaccination was extended to the 18-34 age group last week amid a surge in daily cases due to the highly transmissible Delta variant.

Ireland leading way on Covid vaccination. Thanks to @HSELive & all who have worked so hard on the frontline. @roinnslainte pic.twitter.com/vkE45auUie