THE Irish music community in Britain has been left shocked and saddened by the death of Paul Ruane.

Having bravely battled cancer for eight months the Newcastle-based teacher and musician passed away on August 3 at the age of 48.

He died at the city's Marie Curie hospice with wife Deirdre by his side.

His funeral will take place this Tuesday, August 16 at 11.45am at St Teresa’s Catholic Church, Heaton.

Born in Leeds in 1967, Paul was raised in Yorkshire in the 1970s by parents originally from North Mayo.

He took up the fiddle with Leeds Comhaltas and quickly gained honours in the Fleadh Cheoil both in Britain and Ireland.

After graduating from Cambridge University in physics he married Deirdre Filan, a champion box and whistle player, from Birmingham.

The couple settled in Newcastle-Upon-Tyne in 1990 where they both entered the teaching profession.

Paul went on to excel as both a teacher and administrator, becoming Deputy Head of St. Cuthbert's High School in the city.

He played a huge part in the Irish community serving on the Tyneside Irish Centre committee and as chairman, reviving the Comhaltas branch where he taught with great care and understanding.

Paul maintained a great love of his faith and his family and is survived by his three daughters Orla, Eva and Celia, his wife and his parents.

Secretary of the Tyneside Irish Centre Tony Corcoran said: "We are all devastated by the death of Paul Ruane after the months of suffering he and his family endured.

"All I can say is that he left a fine legacy here in the city of Newcastle and in the Irish community.

"He and Dee have raised a lovely family around St Teresa’s in Heaton. St Cuthbert’s High School where he was Deputy Head has just been rated one of the top establishments in the region.

"The seeds he planted amongst many very young musicians in Comhaltas are coming to fruition. 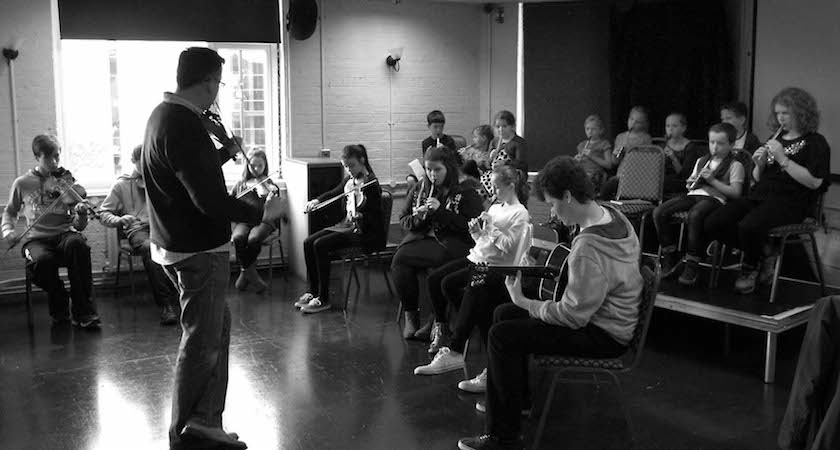 "As a valued member of our management committee at the centre here in Gallowgate, he left me a vision of how it might develop. It’s not been realised yet but I hope we’ll get nearer to it someday soon.

"Paul was a really brilliant fiddle player who won many All-Ireland honours but never a self-publicist.

"He and I shared a common Mayo heritage and probably our music owed something to the strong fiddle tradition in the northern part of the county.

"Like so many from those parts his parents came to Leeds where they still live. Our thoughts are with them in their time of trouble.

"Most of all we are thinking of Deirdre and the girls. We have been deluged with condolences and messages of sympathy here. It’s a sure sign that a great man has passed away but one we could not afford to lose."

Also among those to pay tribute was Des Hurley, Chief Executive of the Leeds Irish Arts Festival.

"I had known Paul for many years, having taken him, his brother Paddy, Tom McElvogue, my brother Kevin to music sessions in Birmingham until all hours of the morning as part of our misspent musical youth.

"We continued to share some fine tunes together both in Newcastle and Leeds up until the shock news of his diagnosis in August last year.

"He was an all-round great lad, we will all miss him. Our thoughts are with Deirdre, the three girls and all the Ruane family at this sad time. RIP Paul."