17/5/2017 Dublin Monaghan Bombings. Fine Gael Minister for Foreign Affairs Charlie Flanagan lays a wreath at the memorial to mark the Dublin Bombings with the names written on both sides of those who died in the Dublin-Monaghan Bombings on 1974 on Talbot Street in Dublin this morning on the 43st Anniversary. Photo Leah Farrell/RollingNews.ie

THE British Government has been urged to release all its files relating to the Dublin and Monaghan bombings in May 1974.

On the 43rd anniversary of the attacks, Ireland’s Minister for Foreign Affairs Charlie Flanagan said he hoped whoever is elected in Britain’s upcoming general election would release files that shed light on the perpetrators of the loyalist bombing.

A total of 33 people, including a pregnant mother and her unborn child, were killed when a series of co-ordinated bombings took place in Dublin and Monaghan at the height of the Troubles.

While the attack was blamed on loyalist paramilitaries of the Ulster Volunteer Force (UVF), no one was ever charged.

The names of the victims were read out before a minute’s silence and wreath-laying by Mr Flanagan, Lord Mayor of Dublin Brendan Carr and relatives of the victims at a commemorative ceremony in Dublin.

“I know that the pain of the families and of the survivors continues to endure. That pain is compounded by the absence – after more than four decades – of the full truth of what happened,” Mr Flanagan told a group of about 200 people gathered at the memorial. 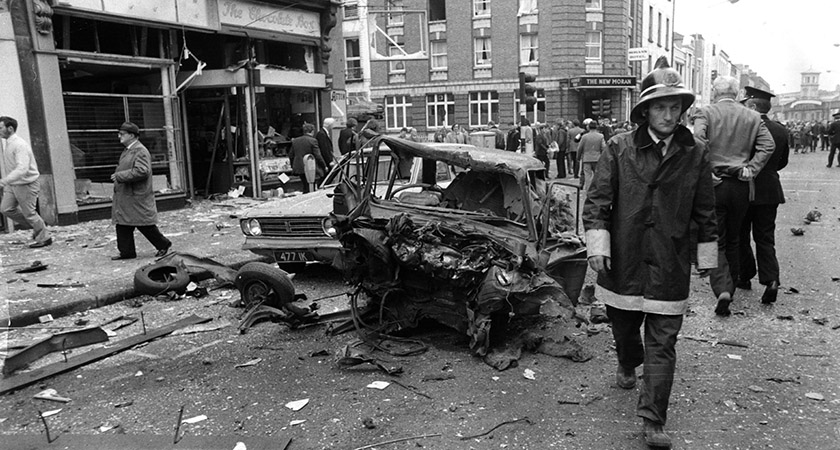 A wrecked car which was near the explosion in Talent Street, Dublin. (Picture: Getty/Keystone)

“My Government colleagues and I are determined to continue, and to complete, our efforts to seek the truth of those awful events.

"Every year that passes we must renew our determination to establish the truth and so secure some measure of comfort for all who have suffered.”

The ‘Justice for the Forgotten’ group, which represents the families, has campaigned for decades for an inquiry to establish the identities of those behind the bombings.

The group has always alleged that British security agents helped the bombers carry out the attacks.

Mr Flanagan said he and the Taoiseach had “vigorously” lobbied the British Government to release its files on the bombings.

“There are issues that the British Government don’t feel comfortable with but I believe it is important in the spirit of true reconciliation across the island of Ireland that all papers and documents, however sensitive they might be, be handed over to the authorities,” he said.

“The Taoiseach and I have pursued this request vigorously over the last twelve months, reflecting the commitment in our Programme for Government.

“We will continue to do so, proactively and at the highest level, including with the next British Government, so that the questions around the attacks will finally be answered.”