AN ELDERLY voter who was reportedly attacked with a milkshake outside a polling station in Aldershot was acquitted of attempted murder while serving as a paratrooper in Northern Ireland during the Troubles, it has emerged.

Donald MacNaughton, 81, allegedly had a pink-coloured shake or yoghurt thrown over him while acting as a Brexit Party teller in the Hampshire town for Thursday's European Parliament elections.

Images of the pensioner drenched in the liquid sparked a furious debate on social media over the recent trend of "milkshaking" political opponents in the UK, as well as whether the splatter pattern indicated an attack or a self-inflicted act.

It has now emerged that Mr MacNaughton, who served in the Parachute Regiment for 22 years, was tried for the attempted murder of an unarmed civilian in the border area of South Armagh in 1974.

The patrol met a local man coming from the direction of the explosion and, suspecting him of being implicated, arrested him under the Special Powers Act. 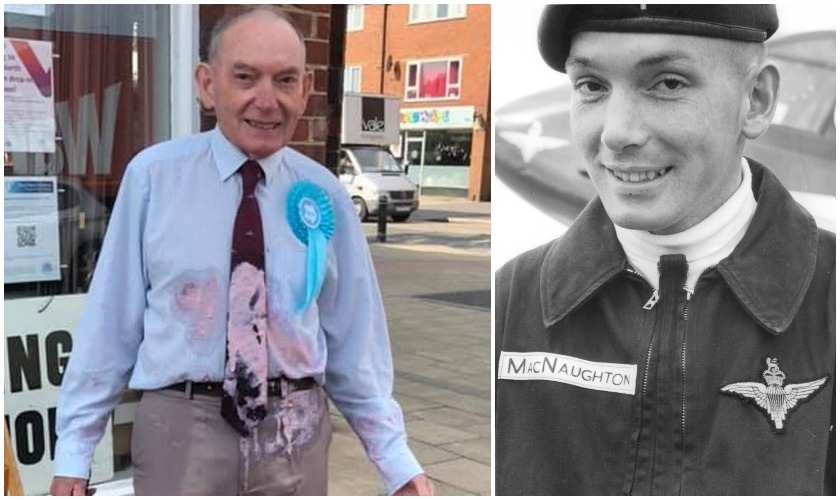 Sergeant MacNaughton alleged that the unarmed man was shot while attempting to escape, while the man claimed he was ordered by MacNaughton to climb over a fence to the flank of the patrol and was shot by him when he did so.

MacNaughton – who was in his mid-30s at the time – was found not guilty of both charges by the Belfast City Commission on September 5, 1974.

He also found that the prosecution had failed to eliminate "the reasonable possibility" that MacNaughton's action was "reasonable in the cirumstances", given "the nature of the terrain and terrorist activity in the area" of Armagh at the time.

Canadian-raised MacNaughton moved to the UK in 1960 and served with the Paras in Cyprus, Berlin and Troubles-era Northern Ireland before leaving in 1982.

The widower settled in Aldershot with his late wife and has written two books on his service – They Stood in the Door and They Stayed a Soldier.

More than £13,000 has been raised for the veteran online in the wake of the incident which drenched his shirt and Brexit Party rosette.

Meanwhile, Hampshire Police have confirmed they are investigating the incident.